A Clash of Kings-Chapter 29

It is late at night when Tyrion is disturbed by the arrival of Lancel with demands from Cersei that Pycelle be released and Ser Jacelyn Bywater be arrested for defying a command in the king's name. Lancel is arrogant until Tyrion reveals he knows his part in King Robert's death and that Lancel has been having sex with the queen. Tyrion threatens to tell Joffrey, and this convinces Lancel to agree to be Tyrion's spy. Afterwards, Tyrion travels a circuitous route to be with Shae.

Tyrion is informed by a sleepy Podrick Payne that Lancel Lannister has arrived. Tyrion is not bothered by the late hour since he usually works well into the morning reading Varys' whisperers' reports or going over Littlefinger's accounts. He figures, however, that Cersei was expecting Lancel's late arrival would catch him less alert. Tyrion takes his time, and roughens his hair to make it look like he has been woken from his sleep.

Tyrion warmly greets Lancel, who has been pacing. Lancel tells him that Cersei commands that Pycelle be released, handing Tyrion her warrant. Tyrion tells Lancel he hopes she is not overtaxing herself, he would not want to see a relapse. After being assured that she is recovered, Tyrion states it is music to his ears, thinking he should have given her a larger dose. Tryion offers Lancel mulled wine to help him sleep, and he rejects the offer, having not come to drink. Tyrion states that wine has its dangers and that he would have thought if Cersei was so concerned about Pycelle she would have come herself. Lancel tells Tyrion just to release the prisoner with a sneer, that the queen is Joffrey's regent. Tyrion replies that he is Joffrey's Hand. Lancel replies “The Hand serves. The regent rules until the king is of age,” and Tyrion says maybe he should write it down so he can remember, and tells Podrick to leave.

After Pod leaves, Lancel states that Ser Jacelyn Bywater defied a command in the king's name, and that Cersei demands he be removed and charged with treason; Tyrion thinks that it means that Cersei has already ordered Pycelle's release and Bywater rebuffed her. When Lancel threatens Tyrion, Tyrion responds that he will hear no warning from a boy. Lancel touches his sword and warns Tysrion to watch his words. Tyrion in turn warns him that at a cry from him, Shagga will break in and kill Lancel with an axe and not a wineskin. Lancel, incensed, tells Tyrion that he is a knight. Tyrion asks if Cersei had him knighted before or after she took him to bed. Lancel says nothing, and Tyrion can tell from his eyes that Varys was right. When Tyrion comments, Lancel demands Tyrion withdraw his filthy accusations. Before he can finish, Tyrion mentions the result if Joffrey discovers he murdered his father to bed his mother. Lancel's courage deserts him as he insists to Tyrion that Tywin Lannister commanded Lancel to do everything that Cersei told him when he was assigned squire to King Robert I Baratheon. Tryion asks if Tywin told him to fuck Cersei also, noting that Lancel looks somewhat like Jaime, but a poor copy. Lancel starts to say he only did has he was bid, to which Tyrion adds that he must have hated every instant of a high place in court, knighthood, and Cersei opening her legs, and then threatens to go to the king. Lancel begs for mercy as Tyrion continues his threats to go to the king, whom he is duty bound to inform. When Lancel states he will end it, Tyrion tells him no, that he will stay close to Cersei, be a spy for him, and tell no one. Lancel agrees, and Tyrion orders him to drink to their understanding. Tyrion then tells Lancel that he could do well out of this and that knighthood is nothing. Then he orders him to tell the queen that he begs her forgiveness, and he will let her have Pycelle to do with however she will, but he will not be on the council. With respect to Ser Jacelyn Bywater, Lancel is to assure the queen that he thinks he can win him away from Tyrion. Tyrion also notes he does not want another nephew. Lancel tells him that there is no need for concern since Cersei has him spill his seed on her belly.

After he leaves, Tyrion thinks it fortunate that Lancel's father Kevan Lannister has two other sons, since in Tyrion's view, as Cersei will kill Lancel if she finds out he is betraying her, and even if Lancel survives the war, he will never survive Jaime's return to King's Landing, the only question being whether Jaime kills Lancel in a jealous rage or Cersei kills him to stop Jaime from finding out. Tyrion privately bets on Cersei.

Tyrion cannot get to sleep, so he sends Podrick, who was asleep, to summon Bronn and get two horses saddled. When Bronn arrives, he asks “Who pissed in your soup?” to which Tyrion answers Cersei. He states he should be used to the taste and that she seems to have mistaken him for Eddard Stark. Bronn replies that he was tall, to which Tyrion responds not after Joffrey took off his head.

They leave through the postern gate, then down Shadowblack Lane to the foot of Aegon's high hill onto Pigrun Alley. Tyrion reflects that the men that have been Hand have been no match for Cersei because they were too honest. The only way to defeat Cersei is to play her own game. In the crowded brothel, they are met by Chataya, who leads them to the common room and serves them wine, apologizing for the quality; she cannot find good wine at any price, which Tyrion understands. As Tyrion waits, Dancy slides onto his lap, saying she has a cure for him feeling unloved. He tells her that he has grown fond of Alayaya's remedy. When Alayaya arrives, she leads him up the stairs, and tells him that Dancy has a bet with Marei, and has only a fortnight before she loses her black pearls. She leads him to the Tower Room, telling him that she will sleep while he is gone before he disappears down the shaft to the tunnel.

As he leaves the stables on his gelding, he hears music that reminds him of the words Tysha sung to him, who was a lie, a whore Jaime had hired to make him a man. 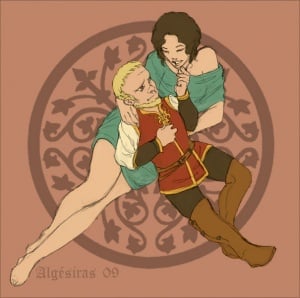 Tyrion and his mistress Shae – by Algesiras©

He arrives at the manse which has been arranged by Varys as a place to sequester Shae. He told Varys he wanted her protected by ugly, scary men who did not like having sex with women. She is now protected by a Braavosi daggerman with a hare lip and a lazy eye, one eunuch strangler, and a pair of foul smelling Ibbenese who are fond of axes and each other. If Tyrion had her guarded by his clansmen, it would only be a matter of time before everyone knew of his concubine.

He enters the room not intending to disturb Shae, but the sight of her nude body makes him hard. He spreads her legs and starts to lick her until his beard is soaked and then enters her, and explodes almost at once. She opens her eyes and tells him she just had the sweetest dream.

Tyrion thinks of the wars and intrigues and that he was made for this.