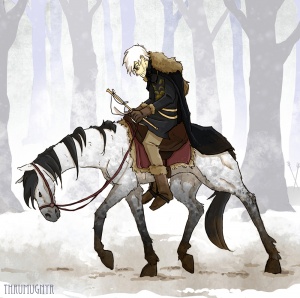 Theon on his way to Moat Cailin.© Thrumugnyr

Theon travels to Moat Cailin under a peace banner to present Ramsay Bolton's terms of rendition to the Ironborn garrison guarding its three towers.

The Ironborn are in bad shape. They have been long isolated from supplies, apparently forgotten by Victarion who brought them there before leaving for the Kingsmoot. The North's crannogmen keep them under constant siege and their morale is so low that they no longer bother to even dispose of their dead.

Their nominal leader Ralf Kenning[1] is only barely alive, suffering a painful, slow, ugly death after being infected by a poisoned arrow. Theon, torn between his conditioning to think of himself as Ramsay's plaything Reek and his orders to present himself as Lord Balon Greyjoy's son, has glimpses of his past pride and identity and actually mercy kills Ralf Kenning before making demands of the mostly Codd men that still survive in the garrison.

Dagon Codd attempts to refuse his terms, but Adrack Humble kills him. The Ironborn surrender to Ramsay Bolton and hear empty promises of food and peace before being mercilessly killed and displayed at stakes along the road.

Ramsay, pleased with Reek’s success, offers him a reward of his choosing. Reek is wary of Ramsay’s offer of “freedom,” and instead requests strong wine. Ramsay agrees, and further humiliates Theon by "rewarding" him with a “promotion” to the role of a dog. He meets Lord Roose Bolton as his own forces arrive at Moat Cailin with a sizeable number of Frey men, including Hosteen Frey and Aenys Frey, both of whom Theon recognizes from his time at their side as part of Robb's war campaign. At this point only about a fifth of the Northmen who went south with Robb Stark have returned alive.

Theon recognizes the newly arrived bride of Ramsay as an impostor; she is not Arya Stark as claimed, but rather Sansa's friend Jeyne Poole.[2]