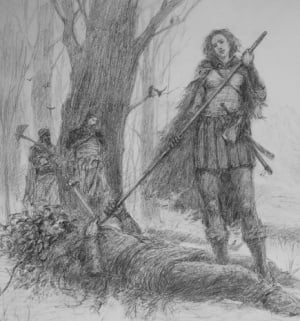 Asha is at Deepwood Motte with her men, having fled the Iron Islands after the Kingsmoot. She receives news from Barrowton that Moat Cailin has fallen to Ramsay Bolton.[1] She thinks about a previous message from Stannis Baratheon asking for homage. Bolton's message is written in the blood of the Ironmen and comes with a piece of Theon Greyjoy's skin as a warning. [2]

At Ten Towers, Asha received tidings that Euron had married her to Erik Anvilbreaker, so she now lingers at Deepwood Motte, knowing that she cannot return to the Iron Islands without having to submit to her new husband. Asha takes note of the fact that Deepwood Motte is an old castle, yet not a strong one, as proven by her quick capture of it. She also tells herself that she will not be captured alive by the Boltons, and will fight to the death in any attempt of capture. She suspects that the next attack will come from the Boltons. Of the thirty longships that set out to capture Deepwood, only four remain with Asha and her followers council her to take flight. Asha refuses, stating that she will only fights, not run.

Asha and Qarl the Maid have sex on Galbart Glover's bed and she reflects on their long relationship, regretting that they cannot marry, as Qarl is too low-born. During the night, the alarm is raised – it turns out that five Flint men from the mountain clans have tried to scale the wall. Asha’s men defeat them quickly. A single survivor claims that they were alone, attempting to save Lady Glover. But Asha’s brutal interrogation reveals their true purpose: to open a gate for the three thousand men coming to take Deepwood Motte.

Asha is unsure who is leading these men and she makes the sudden decision to try to flee for their ships instead, hoping that the northmen have not burned the beached ships she left behind. She is confident, however, since she always beaches half her ships and leaves the other half out at sea with orders to move to Sea Dragon Point if they are attacked.

On the way back to the ships, Asha realizes that it is dangerous to speed through the thick woods at night and they cannot light torches or else attract attention and an attack from the northmen. She decides to rest with her men and wait for sunrise in order to flee more quickly and safely. The northmen catch up to them, however, and a bloody, confusing battle ensues. Asha observes that the northmen are wearing shrubs and trees and thinks to herself that it is as if the very woods were attacking them. The battle continues with Asha fighting back to back with Qarl. Amidst the confusion, she loses him and is eventually hit in the head with an axe by a northman.