Catelyn gets news from Riverrun that House Lannister is gathering an army at Casterly Rock. As Catelyn and Ser Rodrik arrive for Tyrion's trial by combat they meet Ser Brynden, who has resigned his post and plans to join the defense of Riverrun. Bronn kills Ser Vardis Egen in the duel, and Lysa sets Bronn and Tyrion free outside the Bloody Gate to take their chances with the Vale mountain clans. 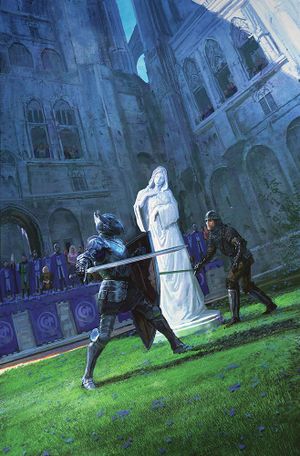 Catelyn watches dawn break over the Eyrie. Below is the waterfall called Alyssa's Tears, named after a woman who had seen her husband, brothers, and all her children slain but never shed a tear. Catelyn wonders how large a waterfall her own tears will make when she dies.

Ser Rodrik continues with his news. Ser Jaime Lannister is gathering an army at Casterly Rock. Catelyn's brother Edmure writes that he has commanded Lords Vance and Piper to guard the pass below the Golden Tooth. Edmure's letter goes on to declare that he will yield no foot of Tully land without soaking it in Lannister blood. Catelyn is in a foul mood and asks why the letter makes no mention of their father, the lord of Riverrun, who must be very sick to give the defense over to Edmure.

When Catelyn says that she should have been woken immediately when the letter arrived, Ser Rodrik explains that Lysa thought it was better to let her sleep. He also mentions that her sister plans to speak with her after the combat. Catelyn declares the combat a mummer's farce, angry that Lysa cannot see Tyrion Lannister has tricked her. In Catelyn’s opinion it is past time that she and Rodrik leave for Winterfell, planning to take a ship north from Gulltown. Rodrik pales at the thought of another sea voyage.

As the servants dress her, Catelyn hopes that she can talk to her sister before the duel. The shy girl Catelyn knew at Riverrun has grown into a vain and inconstant woman. When the message came that Tyrion wanted to confess, Catelyn had tried to convince Lysa to talk to the dwarf in private, but her sister insisted on a public show.

As they come to the doors of Lysa's apartment, Ser Brynden the Blackfish is coming out. He is angry that Lysa has refused to grant him a thousand men to aid the defense of the riverlands. He declares that he has resigned as Knight of the Bloody Gate and will go alone. Concerned about her uncle travelling the high road alone, Catelyn suggests he return to Winterfell with them and receive his thousand men from her. Brynden agrees, and Catelyn and Rodrik enter Lysa's apartment.

Lysa's apartments overlook a grassy area scattered with statues (the remnants of a failed attempt to plant a godswood) where the duel will take place. An elegant looking Lysa is holding court on the terrace, surrounded by her many suitors. The young Lord Robert is in a chair on an elevated platform being entertained by a puppeteer.

Catelyn attempts to explain to Lysa that they have nothing to gain by executing Tyrion and everything to lose if his champion should succeed. Lysa and her suitors insist that any knight is superior to a common sellsword like Bronn. Having seen Bronn fight on the high road, Catelyn is much less certain. Trying another approach, Catelyn argues that the Lannisters (especially Jaime Lannister) will not be satisfied that they had a trial before executing Tyrion. Lyn Corbray insists that Tyrion’s head will serve as a warning to the Lannisters, but Lysa insists that her son wants to see Tyrion fly as if it settles the matter. Catelyn attempts one final time to stop the trial by combat by claiming Tyrion is her prisoner. Lysa merely rants that Tyrion killed her husband and she means to see him pay.

Ser Rodrik asks Catelyn quietly if she truly thinks Tyrion did it. She states that she believes the Lannisters murdered Jon Arryn, but she cannot say whether it was Cersei, Jaime, or Tyrion. Lysa had named Cersei in her letter, but now she seems certain it was Tyrion, perhaps because she has Tyrion as her captive. Rodrik agrees that poison could be the work of Tyrion or Cersei, but Jaime is too fond of blood to have used poison. Catelyn wonders how else they could have made it look a natural death.

When Catelyn hears her nephew shriek in delight at the antics of the puppets, she states that the boy is too undisciplined; he will never be strong enough to rule unless he is taken away from Lysa. Maester Colemon, having overheard this, pipes in that Jon Arryn agreed and was planning to send the boy to Dragonstone. Catelyn corrects him that it was Casterly Rock, but the maester insists it was Dragonstone.

Tyrion Lannister is led forward and Robert asks if he can make him fly. Then the two champions appear from either side of the garden. Ser Vardis Egen is armored in plate from head to toe with a narrow slit for vision. Bronn looks almost naked by comparison, wearing only a half helm, a mail coif, and ringmail over boiled leather. However, Catelyn notices that Bronn is fifteen years younger and half a hand taller, with a greater reach than Vardis,

The septon calls upon the gods before making a hasty departure. Robert is impatient for the fight to start. The knight's heavy triangular shield is strapped to his arm by a squire. When offered a shield, Bronn refuses. The knight is handed an elegant double-edged sword that Lysa announces belonged to Jon Arryn for ceremonial occasions. Lysa explains that she thinks it is only fitting that Ser Vardis avenge Lord Arryn with his own blade, but Catelyn notices that Vardis shows some discomfort with the strange sword. Finally, Robert is allowed to initiate the fight. After an initial probing exchange, Bronn starts to leap away from the knight’s advances. The crowd starts declaring that Bronn is craven, but Rodrik tells Catelyn that Bronn is trying to tire the knight.

As she watches the fight, Catelyn remembers the duel between Brandon Stark and Petyr Baelish. When Brandon saw the limited armor Petyr was wearing, he took off most of his own armor. Petyr had begged her for a favor, but her father had promised her to Brandon. As she had given the favor to Brandon, Catelyn had begged him to not kill Petyr and he had agreed. The fight was ended quickly with a deep cut to Petyr's ribs, which Catelyn was sure was fatal. That was the last time she had seen Petyr until King’s Landing.

When Catelyn returns her attention to the fight she can tell Bronn is quicker. Robert complains that the combatants are not fighting properly, but his mother assures him that the sellsword cannot run all day. Eventually Ser Vardis is addled by a fall, and loses sight of Bronn because of his narrow visor. Bronn uses this opportunity to place a serious blow to the knight’s elbow. Now the knight's parries begin to grow slower and lower and Bronn attacks with more energy. Blind to the fact that Vardis is losing, Lysa calls for him to finish the sellsword as if he were delaying the end on purpose. Vardis charges and Bronn almost loses his balance, but he manages to jump back from the blow and push a statue onto the knight. With Vardis pinned under the fallen statue, Bronn delivers the killing blow and a silence falls over the crowd.

Robert asks if it is over, and Lysa is forced to admit it is. Robert then asks if he can make the little man fly and Tyrion joyfully says, “Not this little man.” When Lysa makes a thinly veiled threat to execute Tyrion anyway, the dwarf asks if Lysa remembers House Arryn's words: “As High as Honor.” Robert insists that he wants to make Tyrion fly, but Lysa is forced to admit that the gods have proclaimed Tyrion innocent. She orders Tyrion and Bronn escorted to the Bloody Gate and provided with supplies, but they must take the high road alone. Everyone in the court recognizes the proclamation as another sort of death sentence. Tyrion favors Lysa with a mocking bow, saying he and Bronn already know the way.