Daenerys eats a stallion heart as part of a Dothraki pregnancy ritual. Afterwards she baths in the Womb of the World and goes to the reception feast. Viserys soon arrives, drunk and screaming. He draws his blade and demands what he is owed. Khal Drogo gives him a crown of molten gold. 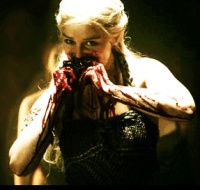 The stallion’s heart is still raw and steaming when it is placed before Daenerys. As part of the ancient Dothraki motherhood ritual she begins to eat the tough, stringy flesh. The Dothraki believe that the heart of the stallion will make her son strong and swift and fearless. If she chokes on the blood or retches the omens are less favorable: the child could be weak, deformed, stillborn, or female. In preparation, Daenerys has eaten bowls of blood and dried horse flesh and fasted for a day and a half, yet still her stomach roils and her jaw aches.

Khal Drogo stands over her as she eats, his face hard, but as she continues Daenerys begins to see pride in his eyes. When she is done, Daenerys pronounces the words she has rehearsed to the dosh khaleen, the crones of Vaes Dothrak. Even the most powerful khals bow to the wisdom and authority of these crones, each of whom is the khaleesi of a dead khal.

The crones proclaim, “The prince is riding; a boy, a boy, a strong boy,” and begin to chant. After the crowd finishes chanting there is silence. Then one of the crones announces the greatness of the new prince, the Stallion Who Mounts the World. Daenerys reveals the name of her son: Rhaego, in honor of her older brother.

Khal Drogo leads her out of the pit with his bloodriders behind, followed by the rest, down the godsway. As they walk, Drogo asks about the name of their son and Daenerys explains about her brother, a fierce warrior who died before she was born; the last of the dragons. Drogo declares that it is a good name. 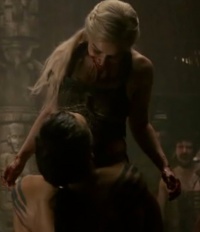 Eventually they arrive at the lake called the Womb of the World. Here Daenerys strips out of her soiled clothing and enters the lake. She cleanses her face and body of the dried blood. When she emerges from the lake, Doreah brings her a robe of sandsilk, but Drogo waves her away. Daenerys can see his manhood through his trousers and helps him unlace; with three quick strokes, he is done. They ride down the godsway to Drogo’s tent-hall where there is a great feast prepared for those too low of rank to attend the ceremony. As Dany rides up the aisle, the crowd hails the life within her. When she dismounts, Daenerys cannot find Viserys Targaryen. She sees Ser Jorah Mormont in a place of respect in the midst of the hierarchy and invites him to her own table.

When Ser Jorah arrives she asks about Viserys. He explains that her brother went to the market to find wine. Daenerys then questions why he was allowed to go alone since the Usurper would pay well for his head. Ser Jorah assures her that Viserys should be safe, as nobody can carry a blade or shed a man’s blood in Vaes Dothrak. Daenerys states that men still die; some of the merchants have huge eunuchs to strangle thieves bloodlessly. Ser Jorah declares that her brother should be wise enough not to steal anything. The knight goes on to explain that her brother was going to steal her dragon eggs until he threatened to cut off Viserys' hand. Daenerys declares that she would have given Viserys an egg if he had asked: she does owe him for their survival and he is all she has left of her family. Jorah tells her that she belongs to the Dothraki now.

Daenerys asks Ser Jorah about the Stallion Who Mounts the World. He explains that the Stallion is the khal of khals, who is prophesized to unite the Dothraki into a single khalasar and lead them to conquer the world.

Doreah interrupts Daenerys to point out her brother entering the hall in rags, drunk, and carrying a sword. Angry mutterings rise all around her and the music dies away. Daenerys has a sense of dread and asks Ser Jorah to stop him and bring him to her. Viserys starts screaming for Daenerys and reproaching the indignity of starting the feast before his arrival. Ser Jorah is quickly by his side and tries to stop him, but Viserys jerks free. Then he moves to sit with Drogo and the other khals.

Drogo rises and declares through translation that Viserys’ place is not on the high bench but at the back where the lowest of the low sit shrouded in shadow so that others do not have to look upon them. Viserys declares drunkenly that that is no place for a king, but Drogo emphasizes that it is his place, mocking him as the Sore-foot King and the Cart King. Viserys draws his blade, angering the Dothraki.Then he spots Daenerys and stalks over. She begs him to throw away the sword but Viserys ignores her. Viserys demands his crown or else he will take Daenerys back, but he will be happy to cut out her child and leave it for Drogo. To emphasis his point, Viserys presses his sword against her belly hard enough to prick her navel through her silks. 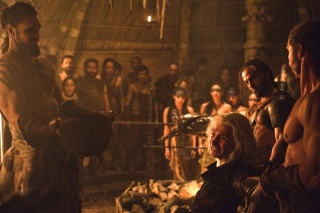 Jhiqui is sobbing in fear, stating that she dare not translate Viserys’ words; if she does she fears Khal Drogo will drag her behind his horses up the Mother of Mountains. Daenerys agrees to translate instead. After hearing the translation, Drogo makes a statement in Dothraki and steps down from the high bench with his bloodriders. Viserys asks and Daenerys translates: “You shall have a splendid golden crown that men shall tremble to behold.” Viserys smiles and declares that that is all he ever wanted. His smile is what saddens Daenerys the most.

Drogo orders his bloodriders to seize the man who was her brother, breaking his arm and taking away his sword in the process. Drogo puts his belt of golden medallions into an emptied stew pot. Viserys finally realizes what is happening and begins to plead and struggle. Ser Jorah tells Daenerys to look away, but she refuses. When the gold is half melted, Drogo declares “Crown for Cart King!” and upends the pot over Viserys’ head. Soon it is over; not a drop of blood is spilled. Daenerys thinks, surprisingly calmly, that Viserys was no dragon, because fire cannot kill a dragon.