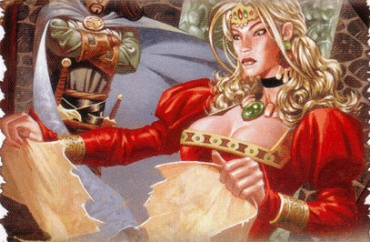 After King Robert’s death, Ned convenes the small council to confirm him as Protector of the Realm. However, the council is interrupted by a summons to the throne room where King Joffrey demands oaths fealty. Queen Cersei destroys Robert’s will and Ned declares Joffrey has no right to the Iron Throne. When Ned calls for the City Watch to seize Cersei and her children, the gold cloaks instead kill Ned’s men, and Littlefinger reveals his betrayal.

Ned wakes to the thunder of Lannister guardsmen drilling in the yard and curses Cersei for not fleeing despite his warnings.

At breakfast, Arya is given permission for a short lesson with Syrio Forel as long as she is ready to leave by midday. Sansa, who is very despondent, asks again to see Prince Joffrey before she leaves. Septa Mordane offers to escort Sansa, but Ned insists it is not wise. Sansa complains it is not fair and runs weeping from the solar. Septa Mordane rises to follow but Ned stops her, declaring that he will try to explain when they return to Winterfell.

An hour later, Grand Maester Pycelle arrives with news that King Robert is dead. Although he has been expecting the news, Ned is surprised by the emptiness it leaves inside him, as if part of him has died as well. Suppressing his grief, Ned orders Pycelle to convene the small council in the Tower of the Hand, not trusting the security of the council chamber. The Grand Maester objects that they can wait a day, but Ned insists so Pycelle dispatches servants to carry the summons.

Ser Barristan Selmy arrives first and asks permission to attend King Joffrey instead, but Ned refuses. When Littlefinger arrives wearing the same clothes as the previous day, he declares that the task Ned set him is done. Varys arrives next with news that Lord Renly has left the city along with Ser Loras Tyrell and fifty retainers, slipping out a postern gate an hour before dawn and riding south for Storm's End or Highgarden. Ned is discomforted by the news, since he had remained hopeful of Renly’s support.

Ned entrusts Ser Barristan to read the writ naming him Protector of the Realm until the heir comes of age. Ned thinks to himself that the true heir is already of age, but says nothing; he does not trust Varys or Pycelle and Ser Barristan is honor bound to protect the boy he thinks is his rightful king. The need for deceit bothers him, but Ned knows he must keep Cersei’s secret until he is firmly established as regent. There will be plenty of time to deal with the succession when his daughters are safe and Stannis has arrived with his forces. Ned asks the council to proclaim him Protector of the Realm as Robert wished. Before anyone can reply, the meeting is interrupted by Fat Tom and the royal steward with news that the king demands the small council’s immediate presence in the throne room. Ned is unsurprised that Cersei would strike quickly, and orders Tom to assemble an escort.

Escorted by eight men-at-arms and supported by Littlefinger, Ned makes his way across the yard, reassured by the number of Stark guardsmen on the walls. Inside the throne room, Joffrey sits the Iron Throne with Cersei and his siblings below, guarded by Sandor Clegane and all of the Kingsguard except Jaime Lannister and Ser Barristan, who has just arrived with Ned. Behind the throne stand twenty Lannister guardsmen armed with swords, and along the walls are a hundred gold cloaks armed with spears, enough to outnumber the Lannisters five to one. At the sight of the gold cloaks, Ned is encouraged that Littlefinger has kept his promise.

Joffrey stands and commands that the council make arrangements for his coronation which he wishes held within the fortnight. The young king then declares that today he will accept oaths of fealty from his loyal councilors. Ned has Varys deliver Robert’s will to Cersei. The queen glances at the words then tears it up, questioning if Ned meant a piece of paper to be his shield. The honorable Ser Barristan exclaims that those were the king’s words, but Cersei dismissively declares that they have a new king now. Then Cersei advises Ned that if he bends the knee and swears fealty to Joffrey he will be allowed to retire peacefully to Winterfell. Instead, bound by his honor, Ned declares that Joffrey has no right to the throne and that Stannis is the true heir.

Joffrey bursts out in anger and Cersei orders Ser Barristan to seize Ned as a traitor. The old knight hesitates and is quickly surrounded by Ned’s guardsmen. At Cersei’s command, the Hound and the Lannister guardsmen draw their swords to aid in the arrest. Ned responds by ordering Janos Slynt to have his gold cloaks take the queen and her children into custody. As Ned is stating he wants no bloodshed, a gold cloak shoves a spear through Tomard’s back. A brief fight ensues, quickly killing all of Ned’s guardsmen. As Ned’s men die around him, Littlefinger slides Ned’s dagger from its sheath, holds it to his throat, and says,