Khal Drogo falls off his horse. Daenerys orders the khalasar to halt and calls for Mirri Maz Duur. The godswife declares that only blood magic can save Drogo. As the rite is being performed, Drogo's bloodriders attempt to intervene. A fight ensues in which Ser Jorah Mormont is injured and all of Drogo’s bloodriders are killed. Daenerys starts to hemorrhage and Ser Jorah carries her into Drogo's tent.

Khal Drogo is looking drawn and swaying in his saddle. He makes no reaction as the large bloodflies circle and bite him. This concerns Daenerys who is used to seeing her husband catch the hated insects with his hands, quick as a snake, when they come too near. Drogo tore off the poultice Mirri Maz Duur had prepared for him six days ago, complaining that it itched. Instead, he used the soothing mud plaster of the herb women. He has also been drinking poppy wine, fermented mare’s milk, and pepper beer heavily but not eating much. At night, he thrashes violently and even the kicking of their unborn child not longer seems to interest him.

As Daenerys reaches for him, Drogo reels from the saddle and falls heavily to the ground. Daenerys rushes to him. Only half conscious and struggling in her arms, Drogo insists that he must ride, for the khal who cannot ride is no khal. Now Drogo has fallen from his horse and it has been seen. When Drogo’s bloodriders come up, Daenerys commands that they will halt for the day and that the slaves be called to erect Drogo’s tent. The bloodriders are not happy with either command; the region is not a camping ground and a woman cannot command. Daenerys insists that Drogo will punish them if they do not obey her and commands Qotho to find Mirri Maz Duur.

Once the tent is erected, Daenerys and her handmaidens bring the feverish Drogo inside and bathe him. Finally, Ser Jorah Mormont arrives with word that Drogo’s fall is known all over the camp. He asks Daenerys to send her maids away and breaks the plaster from Drogo's wound. The wound has festered and is rank with corruption. Ser Jorah declares that Drogo is beyond saving and that they must flee before he dies.

Daenerys asks why she should run, since her son will be khal after Drogo. Ser Jorah explains that the Dothraki follow only the strong; the khalasar will not follow a baby. Instead, the kos will fight for the leadership and her baby will be killed as a challenge to their authority. Daenerys insists that her khas and Drogo’s bloodriders will keep her child safe, but Jorah reminds her that the bloodriders' last duty is only to return her to the dosh khaleen in Vaes Dothrak and then follow their khal. Daenerys does not want to return to join the dosh khaleen, but she also refuses to leave Drogo.

Mirri Maz Duur arrives with Qotho, looking exhausted. Both Qotho and Haggo, taking one look at Drogo, blame the godswife and start beating her. When Daenerys demands that they stop, Qotho threatens to take Daenerys out to be raped along with the maegi. Ser Jorah intervenes and eventually the bloodriders leave.

After they leave, Ser Jorah explains that the bloodriders die with their khal and are now beyond fear because they see their death approaching. Daenerys tells Ser Jorah to don his armor. Once the knight has left, Daenerys tells Mirri Maz Duur to heal Drogo. The godswife states that he is beyond help and will be gone by morning. Daenerys pleads with her, insisting that there must be a way, a magical way. Mirri Maz Duur admits she does know some dark magic learned at great cost from a bloodmage from the Shadow Lands; it will cost a life. Daenerys asks if it means her life, but Mirri Maz Duur assures her it does not. 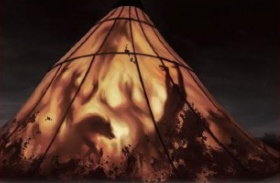 They lower Drogo into a bath and bring his stallion into the tent. Jhogo pleads with Daenerys not to use forbidden bloodmagic and to allow him to kill the maegi. It takes Rakharo, Quaro, and Aggo to force the frightened stallion to the tub while Mirri Maz Duur chants. The godswife uses a red bronze knife covered in glyphs to cut the horse’s throat and fill the tub with blood. The godswife then orders Daenerys, who is now filled with fear, to leave the tent; no one must look upon the old and dark powers the godswife's spell will wake. Outside, the gathered crowd stares at her. When Ser Jorah, now in his armor, sees the bloody footprints Daenerys leaves he asks what foolish thing she has done.

Daenerys can hear the maegi's voice and see the shadows moving inside the tent. The Dothraki start to mutter and draw back. Drogo’s bloodriders return with the healing eunuchs. When Qotho sees what is happening he moves toward the tent, intending to kill Mirri Maz Duur and then Daenerys. He pushes Daenerys aside as she tries to interfere and she screams for her khas to stop him. Quaro is quickly cut down, but Ser Jorah steps forward to confront Qotho. Without his helmet, the knight is hard pressed by Qotho's rapid strikes. Then Qotho's arakh cuts into Ser Jorah's hip and catches on the bone, giving Ser Jorah the opportunity to kill him.

Meanwhile, the other bloodriders and members of Daenerys’ khas have also come to battle. Jhogo's whip catches Haggo around the neck, giving Rakharo the chance to kill him. Daenerys is hemorrhaging from the birth of her child and crawling toward the tent, screaming that the price is too high. The bloodrider Cohollo catches her and is about to kill her when Aggo’s arrow takes him in the chest.

When Daenerys raises her head again, the crowd is dispersing. Some are saddling horses and riding off as the sun sets. She cannot rise and the shadows are whirling inside the tent. Ser Jorah comes to assist her and calls for her handmaids to get the birthing women. Doreah informs him that they believe Daenerys is cursed and are gone. Then she hears someone (possibly Aggo) telling them to take her to the maegi. Daenerys knows she does not want to go into the tent, but cannot speak. Irri and Doreah both agree that they heard Mirri Maz Duur say she knows about birthing.