Bran is climbing the towers of Winterfell when he discovers Cersei and Jaime Lannister making love and talking about the danger his father poses. Eventually, he is discovered and Jaime shoves him out the window.

The majority of the men have gone hunting boar with the king, leaving Bran behind with Jon, Rickon, and the girls. Jon seems to be angry with everyone, even though he’s going to the Wall with Uncle Benjen, so Bran does not look very hard for him.

At first Bran was excited about leaving Winterfell and going to King's Landing on a real horse, not just a pony. He remembers the stories Old Nan told about ghosts, terrible dungeons, and dragon skulls on the walls. He dreams of being a member of the Kingsguard someday and is anxious to meet the greatest living knight, Ser Barristan the Bold. But now Bran is also apprehensive about leaving the only home he has ever known. He will miss all those he is leaving behind, even his pony.

Not being able to stand the goodbyes, Bran goes to the castle godswood with his direwolf. Unlike all his siblings, he still hasn’t named his wolf; none of the names he tries seem right. Eventually, Bran gets tired of trying to teach his wolf to fetch and decides to go climbing. His wolf doesn’t want him to go and howls when he climbs away up a tree and onto the armory roof.

Bran spends much of his time climbing the roofs of Winterfell. His mother claims that he could climb before he could walk. Since Bran cannot remember learning to climb or learning to walk he assumes it must be true. His mother is also terrified that one day he might fall and kill himself. Once Bran kept a promise not to climb for almost a fortnight and was miserable the entire time. Finally he gave in, but confessed his crime the next day. When his father ordered him to the godswood to cleanse himself, they found him sleeping in the tallest tree in the grove the next morning. His father, angry and laughing, told him that from now on he was free to climb, so long as his mother didn’t catch him.

Others have tried to stop him, but to no avail. The guards tried to stop him, but they were too slow and escaping from them was fun. Old Nan once told a story of a boy who climbed too high and was struck by lightning and had his eyes eaten by crows, but Bran likes to feed the crows and they never seem interested in eating his eyes. Maester Luwin made a clay boy and threw it off the wall as an example, but Bran only responded that he is not made of clay and he never falls. 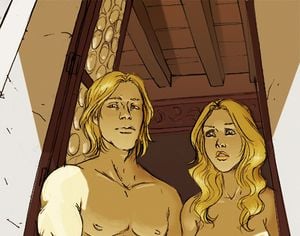 Bran is climbing toward the Broken Tower, where he likes to feed the crows, when he is startled by voices from the First Keep, the oldest part of the castle. At first he doesn’t recognize them as Queen Cersei and her brother, Ser Jaime. Cersei is telling Jaime that he should be the Hand of the King and that Eddard Stark will put them in danger because the king loves him like a brother. Jaime jokes that Robert hates his brothers. Unamused, Cersei insists that Robert will listen to Eddard. Jaime states that he prefers honorable men to ambitious men like Robert’s brothers and Littlefinger.

Cersei says she is worried about what Lysa Arryn may have said to the Starks, but Jaime tells her not to worry, as Lysa has no proof. Despite this, Cersei remains fearful that Eddard might betray her son Joffrey when he takes the throne or convince Robert to put her aside.

Bran grows frightened by what he overhears but wants to see who is talking, so he climbs over the window, then drops down. He can see the man and woman inside, naked and wrestling, fondling, and moaning. He recognizes Cersei just as her eyes open and she sees him. Bran loses his grip as he tries to escape, but he catches himself on the window ledge. Cersei and Jaime come to look at him. Jaime extends a hand to Bran and pulls him up onto the ledge.

As Bran begins to relax, Jaime asks him how old he is. Bran tells him he is seven. Then Jaime loathingly says, “The things I do for love,” and shoves Bran backwards out the window into the empty air.