Three rangers of the Night's Watch are tracking a group of wildling raiders beyond the Wall, and encounter the Others, who had not been seen for eight thousand years.

Gared, Will, and Ser Waymar Royce, three rangers from the Night's Watch, are tracking a band of wildling raiders in the haunted forest. Will has reported on wildlings that he found, claiming they are all dead. Gared, an older man who has been in the Night's Watch for decades, is uneasy, and insists that they turn back to the Wall; they have eight or nine days of travel ahead of them, which can turn into a fortnight if it snows. Waymar, a noble born youth of eighteen, however, has the command, and after making light of Gared's fears asks Will again for the details of what he saw.

Will explains that he saw the wildlings' encampment. Their lean-to was covered by snow, they had no fire, and none of the wildlings moved the entire time he was watching. They were lying on the ground as if dead, but no blood was visible. Waymar suggests they might have been sleeping, but Will insists they are dead. There was also a woman up in a tree, but she did not move either. Gared suggests the wildlings must have been killed by the cold, but Waymar points out that the weather has not been cold enough to freeze men like that. He asks Will to lead them to the dead wildlings.

With night falling, the rangers ride back to the wildling camp. Both Will and Gared sense something is wrong, but Waymar mocks them again and commands Gared to stay behind to guard the horses. When Gared suggests starting a fire, Waymar sardonically orders him not to. Will fears that Waymar's insolence will provoke Gared into drawing his sword, but Gared eventually acquiesces and no fire is lit.

Will and Waymar climb up the ridge, Waymar much noisier than Will. When Will reaches his previous vantage point, he sees that the bodies are gone. Waymar, walking upright, reaches the top of the ridge and stands in plain sight. Will warns Waymar to get down, but Waymar just laughs. Determined to find the wildlings and make his first ranging a success, Waymar orders Will to climb a tree and look for a fire.

Will reluctantly climbs a nearby sentinel tree. Below him, Waymar challenges an unseen foe. Will thinks he sees a white shadow moving below, but is not sure. He is about to call down a warning, but stops, unsure. Waymar calls to Will with unease in his voice as he turns in a circle with his sword drawn, and asks about the sudden cold, which Will also feels. 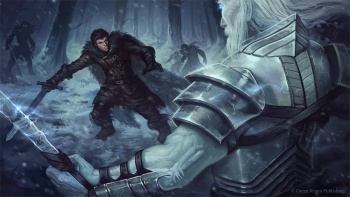 Waymar Royce faces off against an Other. (art by Jon Neimeister)

An Other emerges from the woods: tall, gaunt, and white, dappled with a gray-green shimmer. Waymar nervously commands it to come no further and prepares himself for battle, challenging the Other to "dance" with him. Will notes that Waymar, in that moment, is no longer a boy, but truly a man of the Night's Watch. When more Others appear among the trees, Will considers calling out a warning, but decides not to do so, as it would require him to reveal his position. The sword of the first Other is made of inhumanly-sharp translucent crystal. Waymar is able to check the oncoming blows until his parry comes a bit too late and the Other's sword cuts through the mail under his arm. Waymar screams "For Robert!" and charges, but as his blade strikes the Other's sword, it shatters. One of the shards hits Waymar's left eye and he falls to his knees, blinded. All of the Others move in and slash at him mercilessly.

Will turns his head away for a long time before looking back to see that the Others are gone. When he finally dares, Will climbs down, examines Royce's body, then picks up the knight's twisted and broken sword. He decides to bring it back to show to their commanders, hoping Gared is still with the horses. When Will stands up again, Waymar has risen and is standing over him. His remaining eye has turned blue. With an icy cold touch, Waymar's hands go around Will's throat.