A Game of Thrones (board game) 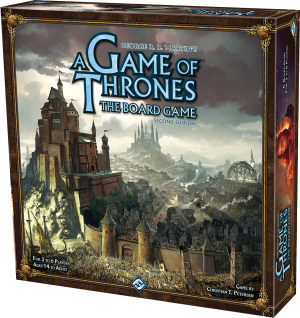 A Game of Thrones is a strategy board game created by Christian T. Petersen and released by Fantasy Flight Games in 2003. The game is based on the A Song of Ice and Fire fantasy series by George R. R. Martin. It was followed in 2004 by the expansion A Clash of Kings, and in 2006 by the expansion A Storm of Swords. A Game of Thrones allows the players to take on the roles of several of the Great Houses vying for control of the Seven Kingdoms, including House Stark, House Lannister, House Baratheon, House Greyjoy, House Tyrell, and as of the expansion A Clash of Kings, House Martell. Players maneuver armies to secure support in the various regions that comprise the Seven Kingdoms, with the goal of capturing enough support to claim the Iron Throne. In 2004 A Game of Thrones won the Origins Award for Best Traditional Board Game of 2003.

A second edition was announced and is being previewed as of late 2011[1].

The game is played on a board that divides the continent of Westeros into several regions. Most regions have at least one icon representing a city, a stronghold, a support barrel, or a power icon, and some key locations have multiples of such icons. Each player randomly selects a starting House card, and then places starting units, such as Footmen, Knights, and Ships, on the board as indicated on the card, places House markers on the Support and three Influence tracks, and then takes the hand of seven House characters to be used in battles. At the beginning of the game, the players with House markers on the highest positions in the Iron Throne, Fiefdoms, and King's Court Influence tracks will start with the Iron Throne, Valyrian Steel Blade, and Messenger Raven special tokens respectively. The three Westeros decks are shuffled, and placed off to the side where all players can see.

Starting with the second turn, at the beginning of each round, the top card from each of the three Westeros decks are revealed, and their effects carried out. The Westeros decks can allow players to muster new forces, cause players to reevaluate their position on the Support track, have all players bid for positions on the Influence tracks, provide restrictions on orders, or cause the Wildlings to assault.

The distinctive feature of A Game of Thrones is that players place orders tokens to every region with a unit that the player controls, outlining the basic actions units in that region can perform. All orders are revealed once all have been placed, requiring players to strategize and out-think their opponents. In addition, players only have a limited supply of each type of order token, limiting the number of various actions that can be planned. There are five types of orders. March orders are used to move units from one region to another and initiate battle if an enemy unit is in the new region. Defend orders provide bonuses to units that are attacked in the region. Support orders allow some of the units in a region to participate in battles that occur in neighboring regions. Raid orders allow a player to remove certain opponent orders from neighboring regions. Consolidate Power orders allow a player to collect more power tokens, which can be used to later bid on positions on the Influence tracks. Each player receives three of each order each turn, however one of each type is marked by a star. In addition to the limit of three of each type of order, a player is limited to playing a maximum number of starred orders determined by his position on the King's Court Influence track. The Messenger Raven special token, held by the player in the highest position on the King's Court Influence track, allows a player to change one of his placed orders for an unused order after all orders have been revealed.

Orders are executed in a specific order, with each player alternating executing an order of a particular type. The order of play follows the order of House marks on the Iron Throne Influence track. First, players alternate executing any Raid orders in play, and then players alternate executing March orders. If a player uses a March order to move units into a region occupied by another player's units, a battle is initiated. During a battle, each player totals the strength of all of his non-routed units in the disputed region, which may be modified by values on an appropriate March or Defend orders. Players may then solicit help from any units in adjacent regions, controlled by any player including those involved in the battle, who have placed a Support order this round. Finally, players select an unused House card from their hand to represent their leader in the battle. House cards have various effects on the battle, which may include strength increases, extra damage, negation of damage, or other unique effects. The player with the highest total wins the battle, and the losing units must leave the region routed, or possibly removed entirely if enough damage was inflicted. Ties are won by the player with a higher position on the Fiefdoms Influence track. Once per round, the player holding the Valyrian Steel Blade special token can add a +1 bonus to their side of a battle. Finally, players can claim more power tokens by executing any Consolidate Power orders remaining on the board. Other than during battles, if at any point a tie occurs, such as when bidding for positions on the Influence tracks, the player holding the Iron Throne special token determines who wins the tie.

The expansion A Clash of Kings was released in 2004, and added several variant rules that can be used with the base A Game of Thrones. Additions include House Martell, a new unit type (Siege Engines), rules for ports, a second possible set of 7 House character cards for all six Houses with a wider variety of effects, and new unique special orders for each House.

The expansion A Storm of Swords was released in 2006, and adds more variant rules to be used with the original A Game of Thrones, either with or without A Clash of Kings. Additions include Tactics cards, Ally cards, new sets of House character cards, new Westeros cards, new units, and a new gameboard for a standalone game, representing a focused view of the Trident region of Westeros.