Arya Stark and the brotherhood without banners visit the ghost of High Heart. Arya escapes the outlaws but is captured by the Hound. 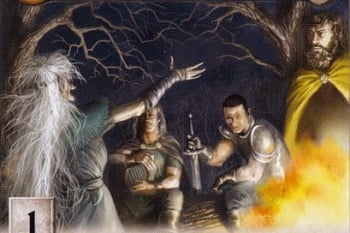 The ghost of High Heart tells some of her dreams.
© Fantasy Flight Games

Gendry mentions that Master Mott considered Thoros a false priest, and Thoros agrees. He was sent to the Seven Kingdoms to bring word of R'hllor, but he spent his time eating and whoring. King Robert was fond of him, and many enjoyed the sight of his flaming sword in melees. Lord Beric silences Thoros by saying, "Fire consumes. It consumes, and when it is done there is nothing left. Nothing." The outlaws reach High Heart again, and the ancient dwarf woman calls Beric the Lord of Corpses, for the stink of the grave is fresh on him. The ghost of High Heart tells them her dreams: the kraken king is dead, and Lord Hoster too; the goat sits alone in the hall of kings in a fever "as the great dog descends on him"; she dreamt of drums and pipes and screams making a great clangor; and "of a maid at a feast with purple serpents in her hair, venom dripping from their fangs. And later I dreamt that maid again, slaying a savage giant in a castle built of snow." Suddenly, she spots Arya, and calls her "blood child" and "dark heart", bidding her to leave. When Beric explains to the old dwarf woman that Arya is being brought to Riverrun, she tells them to seek her mother at the Twins, for there is to be a wedding. She then demands a song as payment for her dreams, the same song she always requests from Tom; Jenny of Oldstones.

Later, Arya speaks with Edric Dayne, who is called Ned like her father. Edric tells her that he saw her father during the Hand's tourney while he squired for Lord Beric. He reveals that Beric was promised to his aunt, “but that was before he died”, Arya thinks to herself. Ned tells her of Wylla, his wet nurse, who he says is the mother of Jon Snow. She has been in the service of the Daynes for years, and Ned is surprised that Arya’s father never spoke of her nor of Ashara, Ned’s aunt. He tells Arya that her father and Ashara fell in love during the tourney at Harrenhal, and that she killed herself after the war because her heart was broken. Arya does not believe the young Lord of Starfall, believing her father only loved her mother. She asks Harwin about it, and he confirms that Eddard and Ashara may have fallen in love at Harrenhal, but at that time his brother Brandon was betrothed to Catelyn. He claims that Ashara killed herself over grief for her brother, and tells Arya "Let it lie, my lady. They’re dead, all of them."

When the outlaws come upon a ruined village, Arya thinks the Lannisters destroyed it, but she is told that the village was destroyed years before by Hoster Tully, because Lord Goodbrook, the lord of the village, had fought for the Targaryens during Robert's Rebellion. Later, Thoros sees in his flames that Riverrun will soon come under attack by the Lannisters again, and he believes the ghost’s dream that Catelyn and Robb are at the Twins. That night, Arya sneaks off while everyone else is asleep, feeling that the outlaws cannot be her pack if they want to ransom her off to her brother, mother, or uncle Brynden. However, she is captured by the Hound while racing through the woods.