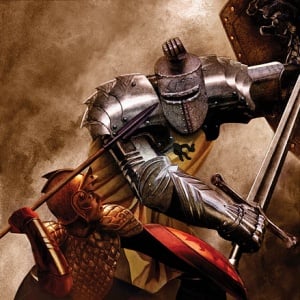 Tyrion wakes up in the morning and readies himself to go to the trial. He considers admitting guilt or demanding a trial by battle. He asks his squire if he thinks that Tyrion did it. Podrick hesitates and sputters.

Cersei's last witness turns out to be Shae. She accuses Tyrion and Sansa of the murder. She tells the assembled court that she was an innocent girl before Tyrion abused her and turned her into his whore. When Shae lies how Tyrion made her call him "Giant of Lannister", the public starts to laugh. Furiously, Tyrion tells them to take Shae away and let him confess. Instead he demands a trial by battle. As Cersei's champion is the formidable Ser Gregor Clegane, she insist that the judges grant Tyrion's request. Mace Tyrell, one of the judges, asks Tyrion who his champion is. To the consternation of the court it is Oberyn Martell, another judge. Tywin is angry but grants Tyrion's request and sets the date for the battle on the next morrow.

The next morning Tyrion is given leave to visit his champion. Oberyn plans to fight with a spear and use only light armor. He specifically warns Tyrion not to touch the weapon.[1] He is full of confidence but Tyrion is not sure of his choice of weapon. Oberyn invites Tyrion to go to Dorne after the trial and talks about crowning Myrcella. Then he changes the subject to the time he visited Lannisport with his mother and sister.

His mother and Tyrion's mother were friends and were planning on marrying Jaime to Elia and/or Cersei to Oberyn. When they arrived at Casterly Rock, Joanna had died and Tywin refused both suggestions and said that Cersei was intended for Prince Rhaegar Targaryen. Later Elia married prince Rhaegar. Oberyn thinks that this is why Tywin had Elia killed. [2] Oberyn proclaims that today he will have justice for Elia and her children.

The combat is held in the outer ward. As soon as the fight begins, Oberyn starts to accuse Gregor of Elia's rape and murder. By using a spear as his weapon Oberyn has the advantage of being able to reach his enemy, and because he is only lightly armored he is fast enough to remain out of Gregor's reach. Oberyn manages to wound his enemy severely, disarming him and knocking him onto the ground. Before Oberyn can finish his opponent, Gregor grabs Oberyn by the leg and drags him down. With his bare hands Gregor smashes Oberyn's teeth, crushes his head, and kills him, all while admiting to the murder and rape of Elia and the murder of her children. Tyrion realizes that he is condemned when the Gold Cloaks take him to the black cells.