From A Wiki of Ice and Fire
Jump to: navigation, search
For the Lord of Dragonstone and father of Aegon the Conqueror, see Aerion Targaryen (son of Daemion).

Prince Aerion Targaryen, also known as Aerion the Monstrous, or Aerion Brightflame as he liked to call himself, was the second son of King Maekar I Targaryen.[1]

In his youth, Aerion was slim and of average height. He had curly silver-gold hair, deep violet eyes, and pale skin. Aerion's face was sculptured and imperious, with a high brow, sharp cheekbones, and a straight nose. He frequently wore clothing as bright as fire, in red and yellow and gold.[7]

Aerion was one of the most outstanding examples of the madness that can hit the members of House Targaryen. Cruel and arrogant, he thought he was a dragon in human form.[7][1] Reportedly, he was a dabbler in the black arts.[6]

Aerion was despised by his younger brother Aegon, who considered Aerion an inveterate liar. According to Raymun Fossoway, the prince was all smiles and courtesy in front of his father, King Maekar I Targaryen, but Aerion's true nature showed in front of others. Prince Daeron Targaryen thought of his brother as "quite the monster".[7]

Aerion was born the second son to Prince Maekar Targaryen and his wife, Lady Dyanna Dayne. He had one older brother, Daeron, two younger brothers, Aemon and Aegon, and two younger sisters, Daella and Rhae.[8]

Aerion owned a dragon egg that was gold and silver.[9]

Aerion threw Aegon's pet cat down a well, though he claimed otherwise. Aerion once visited Aegon in his bedroom during the dead of night, and put a knife to Aegon's privates and joked about removing his genitals so he would become a sister he could marry.[7]

In 209 AC Aerion traveled to Ashford for the tourney at Ashford Meadow, where he mistook Ser Duncan the Tall for a stable boy, ordering him to take his horse. Aerion seemed about to challenge his cousin Prince Valarr Targaryen to a joust, but instead challenged Ser Humfrey Hardyng. Prince Aegon Targaryen, Duncan's squire, wanted Humfrey to kill Aerion. Aerion lowered his lance and impales Humfrey's horse, injuring Humfrey's leg and leaving his horse to die in agony, which Aegon considered to be intentional.[7]

Aerion was insulted by a puppet show portraying a dragon being slain, as the prince felt he was a dragon. Aerion attacked the puppeteers, breaking the fingers of a girl named Tanselle and destroying the puppets. Duncan was then arrested after punching and kicking the prince. After Prince Baelor Targaryen reminded Duncan he could request a trial by battle, Aerion requested a trial of seven. Aerion bribed Ser Steffon Fossoway, one of Duncan's champions, with the chance of a lordship to join the accusers against Duncan. Joining Aerion were his brother Prince Daeron, his father Prince Maekar, and three knights of the Kingsguard, Willem Wylde, Donnel of Duskendale, and Roland Crakehall. Aerion's uncle, Prince Baelor, joined Duncan's side.[7]

During the trial, Aerion put his lance through Duncan's side and struck him from the saddle with a morningstar. Duncan refused to yield and used his skills as a brawler from Flea Bottom to beat the prince down. Duncan forced Aerion to repeat his submission before Lord Ashford, ending the threat to Dunk's other champions. Baelor died from wounds sustained in the trial, however.[7]

After the conclusion of the tournament, Maekar sent Aerion to Lys.[7] 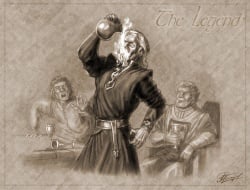 Aerion stayed in Lys for a few years. It is possible that he fathered some children while living there.[10] He served with the Second Sons for a time while in exile.[3]

Aerion returned to Westeros at some point and fought in the Third Blackfyre Rebellion in 219 AC. He performed some actions there that are "known well". After Aegor Rivers was captured, Aerion and the Hand of the King, Lord Brynden Rivers, urged King Aerys I Targaryen to put Aegor to death, but the king decided to send Bittersteel to the Night's Watch instead.[11]

Aerion was married to his cousin, Daenora Targaryen.[8] Together, they had one child, a son ominously named Maegor, born in 232 AC.[6] The same year as his son's birth, Aerion died screaming after drinking a cup of wildfire, believing it would transform him into a dragon.[6][12] A year later, King Maekar died, and in the Great Council Aerion's son Maegor was passed over in the succession as it was feared that the boy might have inherited his father's cruelty and madness.[6][1]

Aerion: If you cannot manage a horse, fetch me some wine and a pretty wench.


Aerion: Knighthood has fallen on sad days.[7]
—Aerion and Duncan the Tall