Ser Alliser Thorne is a knight from House Thorne who now serves as the master-at-arms of the Night's Watch at Castle Black. While capable, he is bitter and humorless, and is particularly hated by many recruits of the Night's Watch who have been trained by him.[2] In the television adaptation Game of Thrones he is portrayed by Owen Teale.

The knight is humorless, bitter, and mean spirited,[10][8][11] but more clever and dangerous than Janos Slynt.[5][12] Jon and Tyrion Lannister both consider Alliser to be a poor instructor.[10]

Alliser wears crisp black leathers[3] with his fur-trimmed cloak and polished boots.[5] He carries a longsword.[13]

Prior to joining the Night's Watch, Alliser was a knight who fought on the side of House Targaryen during Robert's Rebellion. Following the Sack of King's Landing, surviving knights[14] like Alliser and Ser Jaremy Rykker were given the choice by Lord Tywin Lannister between death or taking the black.[10] 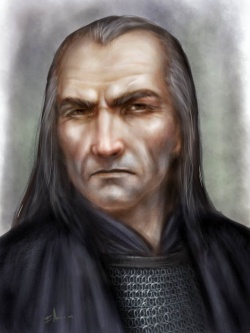 As master-at-arms responsible for training new recruits, Ser Alliser gives Jon Snow the mocking nickname "Lord Snow". His disdain turns into hatred when Jon replies to one of his mockeries, provoking the hilarity of the whole common room of Castle Black.[3] Having absolutely no humor, he takes the mockeries of Tyrion Lannister poorly when Tyrion is invited to the table of the Lord Commander of the Night's Watch, Jeor Mormont, during his visit to the Wall.[10] At Winterfell, Yoren refers to Jon as "Ser Alliser's bane".[15]

Alliser has disdain for the cowardly Samwell Tarly, who refuses to defend himself during sparring sessions. Jon Snow befriends Sam, however, and convinces other recruits not to beat Sam despite Alliser's orders.[8]

When Jon is appointed to the stewards instead of the rangers, Alliser appears so delighted that Jon thinks he is behind it. Sam, however, explains to Jon that the appointment indicates Jon will be trained by Jeor in command.[7]

Alliser never misses an occasion to provoke the young bastard. The evening Jon learns of the imprisonment of his father, Lord Eddard Stark, in King's Landing for treason, Alliser's jeers anger Jon, who tries to attack him with a knife, before being stopped and put under arrest.[16]

This hostility between Alliser and Jon, and the master-at-arms' old friends who are well-placed at court, lead Lord Commander Mormont to send Alliser to the new king, Joffrey I Baratheon. Alliser is to show the severed hand of Jafer Flowers, who turned into a wight, to the court.[17]

Thoren Smallwood, considered one of Alliser's henchmen by Jon Snow, wants to succeed the missing Benjen Stark as First Ranger.[18]

Alliser sails from Eastwatch-by-the-Sea[17] to King's Landing, where he asks for an audience. Tyrion Lannister, now the acting Hand of the King, remembering his dislike for Alliser, delays a meeting, however, and has Bronn find poor quarters in the Red Keep for the visitor.[11]

When Alliser eventually appears before the small council in the throne room, Jafer's hand has rotted away to bones and Alliser's story of wights is mocked by Tyrion. The Hand allows for word to be put out in King's Landing that the Night's Watch is in need of men. When Tyrion dismisses Alliser from court, he asks the knight to give his regards to Lord Commander Mormont and Jon Snow.[4]

Alliser serves as the new master-at-arms of Eastwatch.[19] He falls in with Janos Slynt,[14] who has been exiled to the Watch by Tyrion.[20]

Alliser, Janos, Ser Glendon Hewett, and other men from Eastwatch travel to Castle Black during the battle beneath the Wall. They accuse Jon, who has been leading the defense against the wildlings of Mance Rayder, of being a turncloak and an oathbreaker, and the captive Rattleshirt verifies that Jon had killed Qhorin Halfhand.[5]

During the choosing for a new Lord Commander after Jeor's death, Alliser comes in sixth in voting on the first day and loses votes on the second day, as many black brothers resent having been trained by him. He withdraws his name and decides to support Janos.[2] Alliser expects Othell Yarwyck, the First Builder, to support Janos as well, but a reluctant Othell shocks Alliser by instead mentioning Jon Snow, who is soon after elected as the new Lord Commander.[9]

Alliser complains that Jon's election was overseen by the blind Maester Aemon with Jon's friend, Sam Tarly, by his side.[21]

To separate Janos Slynt and Alliser, Jon appoints Janos to command the garrison at Greyguard. When Janos refuses to obey orders, Jon personally beheads him with Longclaw. Alliser is present when the sentence is given but does not interfere, much to Jon's disappointment.[6]

Jon later orders Alliser to accompany Dywen and another seasoned ranger in scouting beyond the Wall. Alliser is angry, but accepts the mission, not wanting to give Jon cause to execute him as well. He then states that he will return from the ranging, one way or the other.[13]

Jon is troubled that Alliser's friend, Glendon Hewett, commands at Eastwatch while Cotter Pyke is away.[23] 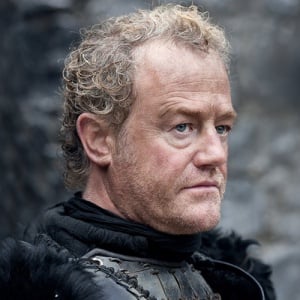 Owen Teale as Alliser in Game of Thrones

They will call you men of Night's Watch now, but you are bigger fools than the Mummer's Monkey here if you believe that. You are boys still, green and stinking of summer, and when the winter comes you will die like flies.[24]

Alliser: Lord Snow wants to take my place now. I’d have an easier time teaching a wolf to juggle than you will training this aurochs.
Jon: I'll take that wager, Ser Alliser. I'd love to see Ghost juggle.[3]

Alliser: Come and make your japes with steel in your hand.
Tyrion: Why, I have steel in my hand, Ser Alliser, although it appears to be a crab fork. Shall we duel?[10]

It would seem they have run short of poachers and thieves down south. Now they send up pigs to man the Wall. Is fur and velvet your notion of armor, my Lord of Ham?[10]

Alliser: Do you think I sailed all the way from Eastwatch-by-the-Sea to be mocked by the likes of you? This is no jape. I saw it with my own eyes. I tell you, the dead walk.
Tyrion: You should try to kill them more thoroughly.[4]

You would like me to refuse. Then you could hack off my head, same as you did for Slynt. I'll not give you that pleasure, bastard. You'd best pray that it's a wildling blade that kills me, though. The ones the Others kill don't stay dead ... and they remember. I'm coming back, Lord Snow.[13]

Ser Alliser Thorne had a voice with an edge like Valyrian steel.[3]

Jeor: You are a wicked man, to provoke our Ser Alliser so.


Tyrion: If a man paints a target on his chest, he should expect that sooner or later someone will loose an arrow at him. I have seen dead men with more humor than your Ser Alliser.
Bowen: Not so. You ought to hear the droll names he gives the lads he trains.


Tyrion: I'll wager the lads have a few names for him as well. Chip the ice off your eyes, my good lords. Ser Alliser Thorne should be mucking out your stables, not drilling your young warriors.[10]
—Jeor Mormont, Tyrion Lannister, and Bowen Marsh

Jeor: Ser Alliser is an anointed knight, one of the few to take the black since I have been Lord Commander. He fought bravely at King's Landing.
Jaremy: On the wrong side. I ought to know, I was there on the battlements beside him. Tywin Lannister gave us a splendid choice. Take the black, or see our heads on spikes before evenfall.[10]

A bitter, mean-spirited man with too great a sense of his own worth.[11]

I don't believe I care to see Ser Alliser just now. Find him a snug cell where no one has changed the rushes in a year.[11]