Queen Alys Harroway was a lady of House Harroway and was the daughter of Lord Lucas Harroway of Harrenhal. She eventually married Prince Maegor Targaryen, becoming his second (of many) wives.[4] 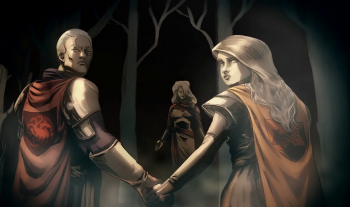 Marriage of Alys and Maegor, officiated by Visenya Targaryen - © HBO.

Alys married Prince Maegor Targaryen in 39 AC in a Valyrian wedding ceremony officiated by Dowager Queen Visenya Targaryen, as the septon at Dragonstone refused to perform the wedding. As Maegor was already married to Lady Ceryse Hightower, whom he claimed to be barren, Alys's marriage to Maegor was a polygamous one. As such, their marriage angered many. Maegor quarreled bitterly with his brother, King Aenys I Targaryen, who had neither known of the marriage prior to the ceremony, nor given his leave for it. The High Septon denounced the marriage as sin and fornication and called Alys "this whore of Harroway", and many of the pious lords in the realm similarly openly began to refer to Alys as "Maegor's Whore". King Aenys furiously gave his brother a choice: set Alys aside or go into exile for five years. Maegor chose the latter option. In 40 AC Alys left Westeros for Pentos, accompanying Maegor in his exile.[1][3]

Alys's husband was the first to return to the Seven Kingdoms. In early 42 AC King Aenys I died on Dragonstone. After he had been cremated and buried, Dowager Queen Visenya flew to Pentos on the back of her dragon, Vhagar, to bring Maegor back to Westeros and claim the Iron Throne. In King's Landing, Maegor faced the Faith Militant who had risen in rebellion against Aenys the year before. Maegor fought seven Warrior's Sons in a trial of seven and won, but fell into a coma. On the twenty-eighth day of Maegor's coma, Alys returned from Pentos. She brought Tyanna of the Tower and six hundred sellswords with her. Tyanna was rumored to be the paramour of Alys.[1][3][4] When Maegor took Tyanna as his third wife later that year, Alys presided over the bedding ceremony and joined Maegor and Tyanna in their wedding night.[1]

In 44 AC[N 1] Alys became pregnant. Grand Maester Desmond confined her to her bed, assisted by two septas, a midwife, and the queen's sisters Jeyne and Hanna, and per Maegor's insistence, both Queen Ceryse and Queen Tyanna served her as well. However, after three months Alys went into labor, bleeding heavily. She gave birth to a stillborn monstrosity, eyeless and twisted. In his rage, Maegor ordered the executions of those in charge of the queen's care, sparing only Alys's sisters.[1][4]

Following these executions, Maegor was approached by Queen Tyanna, who claimed the king had been deceived. She informed the king that the stillborn boy had not been of his seed, but the result of one of Alys's many affairs. She claimed that Alys, after seeing the old, embittered, and childless Queen Ceryse Hightower return to court, feared the same fate awaited her unless she gave the king a healthy son. According to Tyanna, Alys had asked her father, Lord Lucas Harroway, Maegor's Hand, for aid, and so, on the nights that Maegor was sharing a bed with his two other queens, Lucas sent men of confirmed fertility to Alys's chambers. When Maegor refused to believe these claims, Tyanna provided a list of twenty names as proof. The men were tortured in secret so Alys and her father would not be aware, and all but two confessed to their crimes.[1][4]

Queen Alys was dragged from her bed by knights of the Kingsguard, her sisters being cut down when they tried to intervene. Her father was flung from the Tower of the Hand.[N 2] Alys's brothers, uncles, and cousins were put on the spikes that line the dry moat around Maegor's Holdfast. Alys herself received the worst death of all; she was given over to Tyanna. Her death is said to have taken a fortnight of agonizing torture, for which Maegor himself was present. After her death, Alys body was cut into seven parts and mounted on spikes above the seven gates of King's Landing.[1][4]

King Maegor departed the city soon after, assembling a force and marching on the lightly held Harrenhal. It's castellan, a cousin of Alys, opened the gates at the king's approach. Maegor had the entire garrison put to the sword, along with every man, woman, and child with any drop of Harroway blood. Next he went to Lord Harroway's Town, doing the same.[1][4]

In 48 AC, Queen Tyanna confessed that she poisoned Alys's child in the womb.[1]