Ser Arthur Dayne, known as the Sword of the Morning, was a famed and legendary knight from House Dayne and a member of Aerys II Targaryen's Kingsguard. Many considered him to have been the most chivalrous warrior of the Seven Kingdoms.[3] In the television adaptation Game of Thrones he is portrayed by Luke Roberts during a flashback in Season 6.

Arthur was Prince Rhaegar Targaryen's closest friend.[4] He was the brother of Lady Ashara Dayne and Lady Allyria Dayne. His nephew, the son of Arthur's unknown older brother, is Lord Edric Dayne.[5]

According to Catelyn Stark, Arthur was the deadliest of the seven knights of Aerys II Targaryen's Kingsguard.[6] Jaime Lannister, who idolized Arthur,[7] recalls that Arthur was stronger than he.[8] Jon Connington considers Arthur to have been an efficient commander.[9]

According to George R. R. Martin, Ser Barristan Selmy and Arthur were evenly matched with regular swords. However, if Arthur wielded Dawn he would beat Barristan.[10] 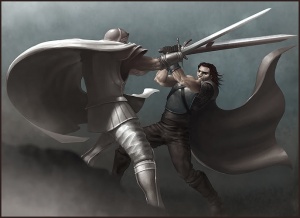 Arthur wielded the greatsword called Dawn as part of his office as Sword of the Morning, carrying it slung across his back.[11] To defeat the Kingswood Brotherhood, he gained the trust of the smallfolk of the kingswood by paying for what he and his forces took and taking their grievances before King Aerys II Targaryen. In the end Arthur slew the Smiling Knight in single combat and ended the threat of the outlaws. Following that victory, he knighted Jaime Lannister, who would later become a sworn brother of the Kingsguard.[12]

Arthur was the champion in the tournament in honor of Viserys's birth in 276 AC, defeating Prince Rhaegar Targaryen.[3] Arthur broke twelve lances against Rhaegar in the tourney at Storm's End, losing to the prince.[13] At the tourney at Harrenhal in 281 AC, he was defeated by Rhaegar once again.[14]

According to a semi-canon source,[15] Arthur, along with his other sworn brother Ser Oswell Whent, aided Rhaegar in the kidnapping of Lyanna Stark near Harrenhal as the year of the false spring was ending.[16] Robert's Rebellion began shortly after.

After the end of the rebellion, Arthur, Oswell, and Ser Gerold Hightower were found by Lord Eddard Stark at the tower of joy. Arthur died there, fighting Eddard and his companions, but the exact circumstances of his death are unclear.[11] The recorded history describes Arthur as being killed by Lord Eddard in single combat, however.[17] Bran Stark recalls his father, Eddard, describing Arthur as the finest knight he ever saw and elaborating further that Arthur would have killed him if not for Howland Reed.[18] Stones from the tower were used to build his cairn upon a nearby ridge.[11]

Arthur is remembered as not only a skilled fighter but a valiant and true knight.[7][4][18] After Arthur's death, Eddard rode to Starfall, the seat of House Dayne, to return the sword Dawn to Arthur's sister, Lady Ashara Dayne,[6] as a sign of respect.[19]

Lord Eddard Stark has a fever dream of Arthur, Ser Oswell Whent, and Ser Gerold Hightower at the tower of joy.[11]

Resting on a weirwood stump, Ser Jaime Lannister dreams of he and Brienne of Tarth being visited by the shades of Arthur, Oswell, Gerold, Ser Jon Darry, Prince Lewyn Martell, and Prince Rhaegar Targaryen in the depths of Casterly Rock.[20] 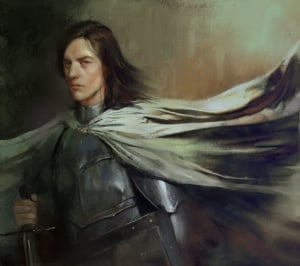 Brienne: I swore an oath to keep him safe. I swore a holy oath.
Arthur: We all swore oaths.[20]

—Brienne of Tarth and Arthur in Jaime Lannister's dream

Smiling Knight: It's that white sword of yours I want.
Arthur: Then you shall have it, ser.[7]

—Arthur to the Smiling Knight

All knights must bleed, Jaime. Blood is the seal of our devotion.[21]

They whispered of Ser Arthur Dayne, the Sword of the Morning, deadliest of the seven knights of Aerys's Kingsguard, and of how their young lord had slain him in single combat.[6]

The finest knight I ever saw was Ser Arthur Dayne, who fought with a blade called Dawn, forged from the heart of a fallen star. They called him the Sword of the Morning, and he would have killed me but for Howland Reed.[18]

Arstan: Myles Mooton was Prince Rhaegar's squire, and Richard Lonmouth after him. When they won their spurs, he knighted them himself, and they remained his close companions. Young Lord Connington was dear to the prince as well, but his oldest friend was Arthur Dayne.


Daenerys: The Sword of the Morning! Viserys used to talk about his wondrous white blade. He said Ser Arthur was the only knight in the realm who was our brother's peer.


Arstan: It is not my place to question the words of Prince Viserys.[4]
—Arstan Whitebeard and Daenerys Targaryen

And me, that boy I was ... when did he die, I wonder? When I donned the white cloak? When I opened Aerys's throat? That boy had wanted to be Ser Arthur Dayne, but someplace along the way he had become the Smiling Knight instead.[7]

I learned from the White Bull and Barristan the Bold. I learned from Ser Arthur Dayne, the Sword of the Morning, who could have slain all five of you with his left hand while he was taking a piss with the right. I learned from Prince Lewyn of Dorne and Ser Oswell Whent and Ser Jonothor Darry, good men every one.[7]