From A Wiki of Ice and Fire
(Redirected from Ashford Tourney)
Jump to: navigation, search 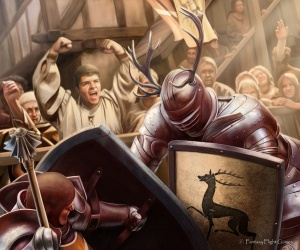 Lord Ashford staged the tourney to celebrate his daughter's thirteenth name day. His daughter was the queen of love and beauty and would have five champions to defend her honor. All other entrants were the challengers, and if anyone defeated a champion, they would take their place as the new champion. After three days of jousting, the champions would determine if Lord Ashford's daughter retained her title or if another would wear it.[1]

The jousting area had five lanes situated north-south, so none of the jousters would have the sun in their eyes. The viewing stand was raised on the eastern side of the lists with an orange canopy to shield the lords and ladies from sun and rain.[1]

The original five champions were:

In addition, a semi-canonical list of attendees can be found in some editions of the graphic novel for The Hedge Knight.

The Trial of Seven

An altercation occurred between Ser Duncan the Tall and Prince Aerion Targaryen when the prince assaulted a girl, Tanselle. This resulted in Duncan striking the prince, claiming that he was only following the knight's vows to defend the weak. Aerion demanded a trial of seven to clear his name. Prince Daeron Targaryen also claimed to have been injured by Duncan, so he made a claim as well. The two sides met on Ashford Meadow.[1]

Duncan made Aerion and Daeron withdraw their claims, proving his innocence. However, Humfrey Beesbury was slain by Donnel during the fight, and Willem had to be carried from the field. Baelor died from a blow to his head, likely given by his brother, Maekar. Humfrey Hardyng also died afterwards from wounds received in the skirmish.[1]

Maekar deeply regretted having caused Baelor's death, and each year he observed the anniversary of his brother's passing.[3]

He remembered Tanselle's puppet show, and the wooden dragon that had started all the trouble there at Ashford. The memory made Dunk feel guilty, as it always did. Three good men dead, to save a hedge knight's foot. It made no sense, and never had.[4]