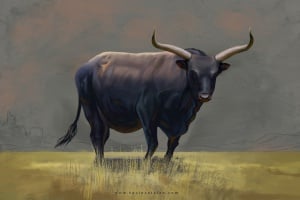 An aurochs, by Kevin Catalan

Aurochs is a type of large wild cattle. They have shaggy hair.[1][2]

Aurochs once dwelled in the majority of Westeros. Because of hunting and domestication, however, they have dwindled in the wild and are not often seen.[3][4]

One place reportedly still inhabited by wild aurochs is near the juncture of the kingsroad and the Green Fork of the Trident in the riverlands.[4] They still dwell beyond the Wall, where the free folk employ them to drag sledges.[5]

Aurochs are frequently used as a symbol of size, strength, stubbornness, and stupidity.[6]

An aurochs is said to have been used as a mount by the mythical Clarence Crabb, as horses could not bear his weight.[7]

Aurochs were seen in Wat's Wood before Aegon's Conquest.[3]

After Daeron the Daring helped turn the tide of the Battle of the Honeywine in favor of the greens, Lord Ormund Hightower is recorded to have feasted the prince on aurochs and strongwine.[9]

Grenn, a member of the Night's Watch, is given the nickname "Aurochs" by Ser Alliser Thorne.[6]

Samwell Tarly recounts how two warlocks from Qarth slaughtered a bull aurochs and made him bathe in the animal's hot blood in an attempt to make him brave.[10]

Six aurochs are roasted whole for a feast during the Hand's tourney.[11]

During the harvest feast at Winterfell, one of the dishes is joints of aurochs roasted with leeks. Bran Stark has a slice of it served to Meera and Jojen Reed.[12]

Aurochs bones are part of the armor worn by Rattleshirt and his mount.[12]

Aurochs are employed in the rearguard of Mance Rayder's host of free folk.[13]

During the feast prior to the tourney for a place among the Brotherhood of Winged Knights, three huge aurochs are roasted whole.[14]

Samwell: You never liked Ser Alliser to call you Aurochs.
Grenn: He was saying I was big and stupid. If Pyp wanted to call me Aurochs, though, he could. Or you, or Jon. An aurochs is a fierce strong beast, so that's not so bad, and I am big, and getting bigger. Wouldn't you rather be Sam the Slayer than Ser Piggy?[15]