From A Wiki of Ice and Fire
Jump to: navigation, search
This article is about the prince. For the king, see Baelor I Targaryen. 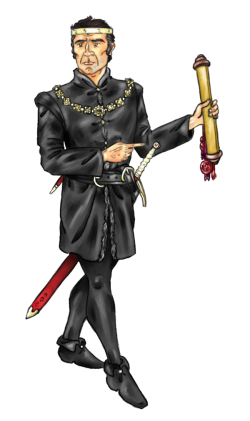 Prince Baelor Targaryen, known as Baelor Breakspear, was a member of House Targaryen and a Prince of Dragonstone. He was the eldest son and heir of King Daeron II Targaryen and Myriah Martell. Named after his grandfather's cousin, King Baelor I,[2] Prince Baelor served as his father's Hand of the King[1] from 196 AC until his death in 209 AC.[5]

Prince Baelor had the dark hair of his mother, Myriah Martell, a Dornish princess. He kept it cut short and kept his jaw clean-shaven.[1] His nose had been broken twice.[1]

A warrior, Baelor seemed to be all that could be wished in a knight, lord, or heir. He was a man who could win respect with ease, and he was as open-handed and just as his father, King Daeron II Targaryen.[5] Baelor treated honorable foes with clemency.[2]

However, many men looked upon Baelor's dark hair and eyes and muttered that he was more Martell than Targaryen.[5] Some Blackfyre sympathizers also were bothered by his namesake, Baelor the Blessed, "the feeblest king who ever sat the Iron Throne".[2]

Prince Baelor was born in 170 AC,[4] the first child of King Daeron II Targaryen and Myriah Martell.[6] After the death of his grandfather, King Aegon IV Targaryen, in 184 AC,[7] Prince Baelor became the heir to the Iron Throne and was later given the title of Prince of Dragonstone by his father.[1]

In 187 AC, the seventeen-year-old Baelor won the name "Breakspear", following his famous victory at his aunt's wedding tourney, where he defeated Ser Daemon Blackfyre in the final tilt.[5]

When the First Blackfyre Rebellion was in its early stages, Prince Baelor advocated leniency toward Daemon Blackfyre, a position that was not favored over the hard line of his uncle, Brynden Rivers, who was called Bloodraven. Nonetheless, Baelor accepted the path towards war. He distinguished himself by leading the Dornish and stormlands force which attacked the rearguard of the rebel army during the Battle of the Redgrass Field in 196 AC. Baelor's forces smashed the rebels against the shield-wall of his brother, Prince Maekar, inspiring a song about the hammer and the anvil.[2][8]

Baelor was named Hand of the King and Protector of the Realm.[1] Ser Arlan of Pennytree had a high regard for Baelor, who was considered chivalrous and wise.[1][5]

In 209 AC, at the tourney at Ashford Meadow, Prince Baelor vouched for Ser Duncan the Tall because he knew Duncan's old master, Ser Arlan of Pennytree. Baelor had jousted with Arlan in a tourney at Storm's End and had unhorsed him after breaking four lances. Due to Baelor's intervention Duncan was allowed to enter the lists.[1]

When Duncan attacked Prince Aerion Brightfire to defend Tanselle, an innocent puppeteer, Baelor had a private word with Duncan and advised him. The next day Baelor sat together with Prince Maekar, Lord Leo Tyrell, and Lord Ashford in judgment of Duncan. Prince Aerion demanded a trial of seven, which was granted.[1]

With the help of his squire, Prince Aegon Targaryen, and Ser Raymun Fossoway, Duncan was able to recruit five men to fight for him. They needed one more, and because Baelor believed Duncan, he fought for him even though his nephew was the accuser.[1]

Before the melee began, Baelor advised Dunk's champions to use tourney lances, which would strike before their opponents' shorter war lances in the opening tilt. He also noted that the three knights of the Kingsguard on the opposing side would be sworn not to harm him, allowing him to safely engage them. Dunk's defending party won the trial, but Baelor had received a mortal blow to his head from the mace of his brother, Maekar, and the prince died in Dunk's arms. Baelor was cremated at Ashford, per House Targaryen funeral traditions.[1]

Baelor married Jena Dondarrion, with whom he had two sons, Valarr and Matarys,[6] both of whom died in the Great Spring Sickness.[2] Baelor's eldest brother, Aerys I Targaryen, succeeded their father and was later succeeded by their youngest brother, Maekar I, who had dealt the blow that had killed Baelor.[9][10][2]

Baelor's son Valarr married Kiera of Tyrosh.[6] She gave birth twice, but both sons were stillborn.[8]

Maekar: Brother, have you taken leave of your senses? This man attacked my son.
Baelor: This man protected the weak, as every true knight must. Let the gods determine if he was right or wrong.[1]

—Duncan the Tall and Baelor

The world made no sense when a great prince died so a hedge knight might live.[1]