From A Wiki of Ice and Fire
Jump to: navigation, search
For others with the same name, see Balerion (disambiguation). 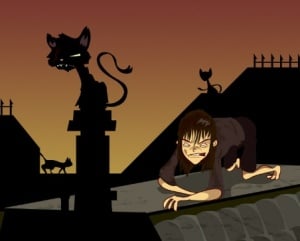 Balerion was a kitten belonging to Princess Rhaenys Targaryen, who liked to pretend he was the great dragon, Balerion the Black Dread. After Rhaenys was killed in the Sack of King's Landing in 283 AC, it was not known what became of her kitten.[1]

Many readers believe that Balerion grew up to be the vicious black tomcat with a torn ear that still lives in the Red Keep;[2] this has been somewhat confirmed by George R. R. Martin.[3]

Balerion is a old black male cat, with one chewed[4] and torn ear[5] that leads him to appear one-eared.[2] He is filthy and foul-tempered, and has been known to attack ravens in the rookery of the Red Keep.[5] The cat once stole a roast quail served to Tywin Lannister at a dinner with King Robert I Baratheon.[2] He also once clawed Prince Joffrey Baratheon's hand.[5]

Arya Stark has been assigned by Syrio Forel to catch every cat in the Red Keep, and has succeeded with all except for one mean one-eared black tomcat. She chases him halfway across the castle before she finally catches him, and kisses his forehead while he tries to claw her. Prince Tommen Baratheon, his sister Princess Myrcella, and their septa observe this, and believe that Arya is a strange peasant boy who does not belong in that part of the castle. The septa commands red cloaks to grab Arya, but she escapes.[2]

Lord Varys speaks to Lord Eddard Stark when he is imprisoned in the black cells of the Red Keep, and tells him about Princess Rhaenys Targaryen and her kitten.[1]

Sansa Stark, visiting the Red Keep godswood late at night, encounters the one-eared black tom. He brushes against her leg, then spits at her and runs away.[4]

Arya Stark, as the Braavos street urchin and fishmonger Cat of the Canals, encounters many cats, one of which reminds her of the one-eared cat she had chased in the Red Keep.[7]

King Tommen Baratheon tells his uncle, Lord Regent Kevan Lannister, that the "bad cat" had been outside his window the previous night, but his kitten Ser Pounce had hissed at him and he ran off. Cersei explains about the old black tom, who once attacked her son Joffrey.[5]

That's the real king of this castle right there, older than sin and twice as mean. One time, the king was feasting the queen's father, and that black bastard hopped up on the table and snatched a roast quail right out of Lord Tywin's fingers. Robert laughed so hard he like to burst. You stay away from that one, child.[2]

—a gold cloak to Arya Stark

She had a small black kitten she called Balerion, did you know? I always wondered what happened to him. Rhaenys liked to pretend he was the true Balerion, the Black Dread of old, but I imagine the Lannisters taught her the difference between a kitten and a dragon quick enough, the day they broke down her door.[1]