Barrowton
The north and the location of Barrowton

Barrowton,[1] occasionally called Barrowtown,[2] is a prominent town in the north which contains Barrow Hall, the seat of House Dustin. It lies in the barrowlands at[3] or near[4] the confluence of two rivers which flow south to the Saltspear.

Barrowton is centered around the large hill Great Barrow, on which was built House Dustin's castle, Barrow Hall.[5] The town itself is wooden and has broad straight streets, including one lined with elms. One of its inns has a wheat sheaf painted on its sign.[1] Barrowtown has a heart tree.[1]

House Stout of Goldgrass[6] has a keep near the eastern gate of Barrowton.[1] Outside of the town are rolling plains which the wind howls over.[1]

King Aegon I Targaryen twice held court at Barrowton during his royal progresses.[8]

Denys Snow, the Bastard of Barrowton, was killed fighting for Prince Aegon Targaryen in the Battle Beneath the Gods Eye.[9]

Lord Dustin held a tourney for King Jaehaerys I Targaryen and Queen Alysanne Targaryen and showed them the First King's barrow when they visited Barrowton in 58 AC. While staying in the town, Alysanne heard from women speaking about the first night.[10]

Near the start of the Dance of the Dragons, Prince Jacaerys Velaryon gained the north for the cause of his mother, Queen Rhaenyra Targaryen. After gathering men to Barrowton,[11] Lord Roderick Dustin led his Winter Wolves south to join Rhaenyra's blacks. Although Roddy the Ruin was killed in the First Battle of Tumbleton,[12] reinforcements gathered at Barrowton and joined the host of Lord Cregan Stark.[13]

Winter Fever struck Barrowton in 134 AC.[14] During that year's winter, Lord Dustin closed his gates to hundreds of starving villagers outside the town's walls.[15]

According to a semi-canon source, there may be a cadet branch of the Starks in the town.[16] Brandon Stark was fostered in Barrowton as a youth.[17]

Against the wishes of his wife, Lady Barbrey Dustin, Lord Willam Dustin personally led the Barrowton levies during Robert's Rebellion. After Willam was slain in combat at the tower of joy, Lord Eddard Stark returned Willam's stallion, but not his bones, to Barrowton.[17] 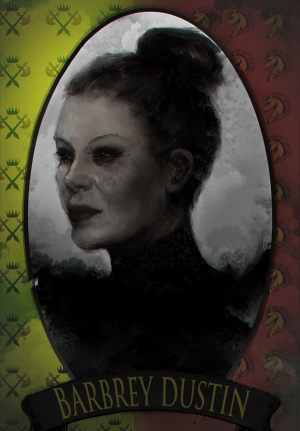 Barbrey Dustin, the Lady of Barrowton, sends a minimal number of troops from Barrowton when Robb Stark marches south to rescue his father, Lord Eddard Stark.[17]

After hearing of the ironborn threat to Torrhen's Square, Maester Luwin sends ravens to White Harbor, the barrowlands, and the wolfswood with instructions to summon their levies.[18]

Barrowton men in service to House Dustin are slain during the Red Wedding.[19]

Maester Aemon sends a raven to Barrowton in a plea for help to defend Castle Black from wildlings.[20]

A host from Barrowton joins the Ryswells in destroying ironborn ships on the Fever River[21] and then participates in Ramsay Bolton's force sent to recover Moat Cailin.[22]

Melisandre tells Jon Snow she had a vision of a town with wooden walls and streets. Its banners depict a moose, a battle-axe, pine trees, longaxes, and a horse's head.[23]

Following the surrender of Moat Cailin, the Boltons call upon the northern bannermen to assemble in Barrowton to pledge loyalty to the Iron Throne and attend the wedding of Ramsay to "Arya Stark", actually Jeyne Poole,[24] before the town's heart tree.[1] Houses Stout and Dustin host the Boltons while they wait for the bannerman to arrive and while Ramsay searches the barrowlands for missing Frey envoys. Lady Barbrey forbids Ramsay from Barrow Hall, and he is instead reluctantly hosted by Harwood Stout.[1] An angry Ramsay threatens to burn the wooden town.[1]

After hearing that Stannis Baratheon has taken Deepwood Motte, Lord Roose Bolton decides to move the wedding to Winterfell to strengthen Ramsay's claim and to goad Stannis into fighting. While riding from the Stouts' keep to Barrow Hall, Roose tells Theon Greyjoy about his sons Ramsay and Domeric Bolton.[1]

A smith from Barrowton hammers a crude iron kraken brooch for Theon to wear for the wedding. Jeyne is protected by Lady Dustin during the journey from Barrowton to Winterfell. Barbrey brings furnishings from the town for Jeyne's bedchamber in Winterfell,[25] as well as food and fodder for the levies.[17]

Within the crypt of Winterfell, Barbey confides to Theon that if the bones of Eddard Stark are found, they will not pass Barrowton.[17]

Fear is what keeps a man alive in this world of treachery and deceit. Even here in Barrowton the crows are circling, waiting to feast upon our flesh.[1]

Chapters that take place in Barrowton