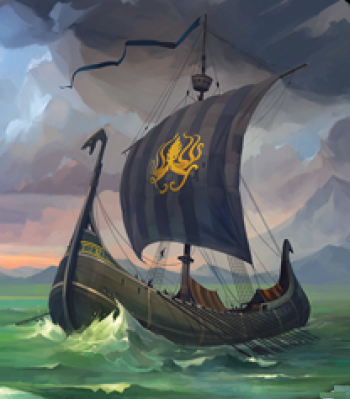 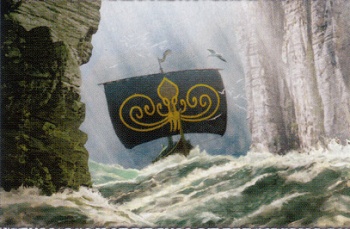 The Black Wind is the longship captained by Asha Greyjoy.

Three or four years ago, during the reign of King Robert I Baratheon, Asha traded at various ports, including Fair Isle, Lannisport, and the Arbor. She slept with Qarl the Maid during the voyage.[1] Asha was raiding Lyseni pirates at the Stepstones when her uncle Euron was exiled by her father Balon, Lord of the Iron Islands.[2] 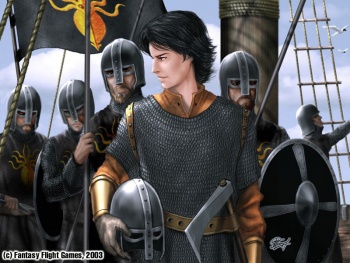 Asha takes the Black Wind to Great Wyk with messages from her father, Lord Balon Greyjoy.[3] When the Iron Islands enter the War of the Five Kings, Asha leads thirty longships around Sea Dragon Point to the Bay of Ice,[4] where she besieges and captures Deepwood Motte.[5]

After Balon's death at Pyke, Asha returns to the Iron Islands from the north and visits her uncle, Lord Rodrik Harlaw, at Ten Towers. During the journey, the longship stops at the Stony Shore in search of a wet nurse for young Erena Glover. A goat is used for milk instead.[6]

Arriving at Old Wyk for the kingsmoot, Asha beaches the Black Wind near the castle of Lord Norne Goodbrother.[2] During the kingsmoot, her crew present the meager resources captured from the north, pebbles, pinecones, and turnips.[7]

After Euron Greyjoy is chosen King of the Isles and the North at the kingsmoot, Asha flees Old Wyk, sailing first for Ten Towers on Harlaw and then returning to Deepwood in the north. She has only four longships left, including Black Wind and Tristifer Botley's ship.[1]

When Deepwood comes under attack by northern mountain clans, Asha abandons the castle and leads her men through the wolfswood toward the strand. They are defeated by Stannis Baratheon in the fight by Deepwood Motte, however.[1] Meanwhile, Asha's four longships are burned or taken by Alysane Mormont as they lay off the strand.[8]

The crew of her Black Wind took a perverse pride in the deeds of their woman captain. Half of them loved her like a daughter, and other half wanted to spread her legs, but either sort would die for her.[6]