From A Wiki of Ice and Fire
(Redirected from Blackfyre Rebellions)
Jump to: navigation, search

King Aegon IV Targaryen legitimized all of his bastard children on his deathbed. Aegon's legitimate son, Prince Daeron II Targaryen, succeeded his father, and did all he could to keep the Great Bastards close. However, rumours about Daeron's parentage, once started by King Aegon IV himself, claimed that Daeron was the illegitimate son of Aegon IV's brother, Ser Aemon Targaryen, the Dragonknight, and those rumours were not forgotten when Daeron took the throne.[7]

King Aegon IV's reign had been corrupt, and when Daeron II ascended the throne in 184 AC, the royal court was reformed. All the members of the small council were dismissed and replaced by men of Daeron's choosing. The City Watch of King's Landing was likewise "repaired", though it took more than a year to do so. Most importantly, Daeron sought to unify all of the Kingsdoms, by bringing Dorne under the authority of the Iron Throne. It took two years of negotiations before Prince Maron Martell, Daeron II's good-brother and the Prince of Dorne, agreed to be betrothed to Princess Daenerys Targaryen. Their wedding, which occurred in 187 AC,[5][8] finally united Dorne with the other Kingdoms under Targaryen rule.[5]

Maron had won a few concessions for Dorne during the negotiations, and the lords of Dorne held significant rights and privileges that the other greater houses in the Seven Kingdoms did not. In addition, Daeron brought many Dornishmen to his court, who held important offices, causing others to believe that the Dornishmen held too much influence over the King. Over time, men began to long back to the times when the Dornish had been the enemies to battle against. In addition, Daeron was not at all a warrior. While his heir, Prince Baelor, was as much a warrior as could be desired, he had the appearance of a Martell. With the memory of the Dornish as enemies still in their minds, many of the Dornish Marches came to mistrust King Daeron II and Prince Baelor.[5] 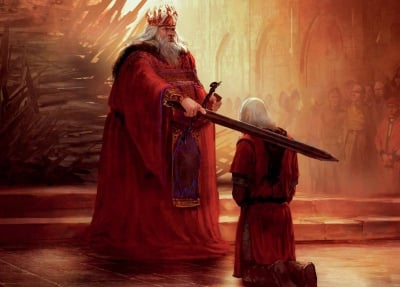 King Aegon IV Targaryen knights his bastard son, Daemon, publicly acknowledging him as his own son, and grants him the Targaryen sword Blackfyre - by Marc Simonetti

These same people looked at Daemon Blackfyre, the bastard son of King Aegon IV Targaryen and his cousin, Princess Daena Targaryen, and saw in him a warrior, grown tall and powerful, with the hallmarks of Old Valyria (deep purple eyes, silver-gold hair down to his shoulders), who was described as having had an "almost inhumane beauty", being "half a god among mortal men".[5][9] Daemon had been knighted in 182 AC at the age of twelve by King Aegon IV Targaryen himself, after winning a squire's tourney. After knighting his bastard son, King Aegon had publicly bestowed the Targaryen Valyrian steel sword Blackfyre on him as well,[7] finally acknowledging him.[9] There were some who felt that the sword symbolized the monarchy[10] as it had been the sword of King Aegon I Targaryen, the Conqueror, and had been passed on from king to king ever since. Aegon's public gift of the sword would eventually start the first talk that Daemon should be king.[11] Following the acquisition of the sword, Daemon took the name "Blackfyre" for himself.[7]

It is claimed by Daemon's supporters that Daemon had desired to marry his younger half-sister, Daenerys, and that King Aegon, who had desired Daemon to marry the daughter of the Archon of Tyrosh, had promised Daemon that he could have more than one wife. However, upon King Aegon's death, King Daeron II paid the dowry to the Archon, seeing Daemon wed to Rohanne of Tyrosh.[5] Daemon and Rohanne would have seven sons, and at least two daughters.[4] Whether Daemon indeed loved Daenerys, and whether Daenerys indeed loved him as well, as Daemon's supporters and the singers would later claim, is unknown. However, no record of Daenerys mourning Daemon has ever been found.[5]

Those lords and knights dissatisfied with Daeron II's reign began to seek Daemon out, but following Daenerys's wedding, it took eight more years before the rebellion bloomed. In 196 AC, Daemon Blackfyre, the bastard son of Princess Daena and King Aegon IV, began his rebellion, which would last nigh on a year. For his sigil, Daemon took the Targaryen sigil with the colors reversed, a black dragon on red, giving him the nickname "the Black Dragon" (with Daeron being referred as the Red Dragon). [5][4][12] Following the Blackfyre defeat in the first rebellion (which included the death of Daemon himself and his eldest two children, Aegon and Aemon), Daemon's bastard half-brother, Ser Aegor Rivers, fled to Tyrosh with Daemon's remaining children and widow. From there, Daemon's descendants continued to plot. Four more rebellions would follow, until 260 AC, when Maelys I Blackfyre, the last male of House Blackfyre, was slain on the Stepstones during the War of the Ninepenny Kings.[5][4][12][13][14][6]

In 196 AC, Daemon Blackfyre, the bastard son of the late King Aegon IV Targaryen and his cousin, Princess Daena Targaryen, attempted to usurp the throne from King Daeron II Targaryen, the legitimate son of King Aegon IV Targaryen and his sister-Queen, Naerys. This caused the second major civil war in the history of the Targaryen reign. The war lasted nigh on a year. Battles were fought in the Reach, the westerlands, the riverlands, and more places. During the final battle of the war, the Battle of the Redgrass Field, Daemon and his two eldest sons, Aegon and Aemon, were killed, and his allies defeated. However, five of Daemon's sons and several daughters survived and were carried into exile to the Free Cities by Aegor Rivers, known as "Bittersteel", Daemon's half-brother, who had been one of Daemon's biggest supporters. They ended up in Tyrosh, the former home of Daemon's widow, Rohanne, where Daemon's descendants and Aegor Rivers continued plotting.[5][4][12]

In 212 AC, Daemon I Blackfyre's third son, Daemon II Blackfyre, disguised as "Ser John the Fiddler", and other Blackfyre loyalists attempted to launch a second rebellion under the pretense of gathering for a wedding tourney at Whitewalls. They were exposed by Hand of the King Brynden Rivers, who ended the rebellion before it began. Rivers arrested Daemon and either executed or punished those lords who had been willing to support the Blackfyre cause. Daemon was kept alive and imprisoned to prevent Aegor Rivers from crowning Daemon's younger brother, Haegon, as his successor.[12][13] 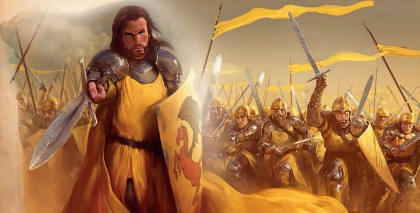 In 219 AC, Aegor "Bittersteel" Rivers launched a new invasion, after crowning Haegon I Blackfyre. Prince Maekar Targaryen, as well as two of his sons, Prince Aegon and Prince Aerion, fought in this conflict. Hand of the King Brynden Rivers once again duelled his half-brother, Aegor Rivers (their first duel having been during the Battle of the Redgrass Field, during the First Blackfyre Rebellion). The Third Blackfyre Rebellion ended with the death of Haegon I, and the arrest of Aegor. While Prince Aerion and Lord Brynden both argued that Aegor Rivers should be put to death, King Aerys I Targaryen agreed to send him to the Wall instead, to join the Night's Watch.[13] However, the ship which transported Rivers north was attacked by the Golden Company,[13] which had been founded by Bittersteel a year after the Second Blackfyre Rebellion had failed.[5] Rivers escaped, and before the year had ended, had crowned Haegon's eldest son, Daemon, Daemon III Blackfyre.[13]

In 236 AC, as a cruel winter was ending, Daemon III Blackfyre and Aegor Rivers launched the Fourth Blackfyre Rebellion. Their army landed at Massey's Hook. While Daemon had the support of the Golden Company, there were only few lords who flocked to their banners. The Rebellion ended with Daemon's death during the Battle of Wendwater Bridge, where Ser Duncan the Tall of the Kingsguard slew him. Aegor Rivers once more retreated across the Narrow Sea,[14] where he died several years later.

War of the Ninepenny Kings

In 258 AC, nine outlaws, exiles, pirates and sellsword captains formed the Band of Nine in the Disputed Lands on Essos. Their goal was to carve out a kingdom for each of them. The Band of Nine swore their oath of mutual aid and support in carving out kingdoms for each of their members. Amongst them was the last Blackfyre, Maelys the Monstrous, who had command of the Golden Company, and the kingdom they pledged to win for him was the Seven Kingdoms. Prince Duncan, when told of the pact, famously remarked that crowns were being sold nine a penny; thereafter the Band of Nine became known as the Ninepenny Kings in Westeros. It was thought at first that the Free Cities of Essos would surely bring their power against them and put an end to their pretensions, but nonetheless preparations were made, should Maelys and his allies turn on the Seven Kingdoms. But there was no great urgency to them, and King Aegon remained intent on his reign.[14][6]

The Band of Nine did not founder, however, they captured Tyrosh and took control of the Stepstones in 260 AC, Westeros was their next target. King Jaehaerys II Targaryen responded swiftly to the threat, dispatching an army to the Stepstones to meet the Band of Nine in battle, instead of waiting for the threat to reach Westeros. The ensuing conflict was dubbed the War of the Ninepenny Kings. The threat to Targaryen rule was ended when Ser Barristan Selmy slew Maelys the Monstrous in single combat. As Maelys died, House Blackfyre died with him.[6][3]

After five generations, the Blackfyre Pretenders had all been killed.[6] The Golden Company, raised in 212 AC by Aegor Rivers,[5] still remains to this day, fighting as a mercenary force in Essos.[15] It is considered to be one of the finest sellsword companies, consisting out of exiles and sons of exiles, all formidable fighters[3] who dream of gold and home.[15]

Despite not being a Blackfyre Pretender, the fifth son of Daemon I, Aenys Blackfyre, put his name forward in the Great Council of 233 AC. Invited to King's Landing to present his claim, he was dishonorably killed by Lord Brynden Rivers, despite the previous promise of safe passage.[16]