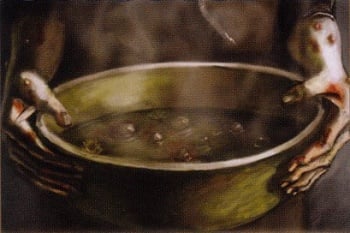 A bowl of brown, by Yulia Startsev © Fantasy Flight Games

Bowl of brown,[1] also called the brown,[2] is a thick stew made by various pot-shops in the alleys of Flea Bottom in King's Landing.[3] Similar meals are not uncommon in other places of Westeros.[4]

Brown is often cooked for long periods of time, simmering for year after year inside huge tubs where it receives new ingredients while being constantly served to the poorest residents of the city.[2]

Common ingredients include barley, carrot, onion, turnip, apple, and whatever pieces of meat its makers can get hold of and dare to include in it, including fish caught locally.[2][5] The meats vary according to each pot shop, but it is not uncommon for them to include pigeons, rats, cats, and dogs.[6][2] Some even use dead bodies of dubious origin.[1]

Typical brown has a film of grease over it,[4][2] and shows pieces of its vegetable ingredients.[2] Meats are harder to identify, however, and most consumers do not want to try.[2]

According Mushroom, the younger son of Lord Hornwood and two of his companions may have ended up in a bowl of brown after disappearing from Flea Bottom in the aftermath of the Dance of the Dragons.[7]

When he was young, Ser Duncan the Tall would sell cats, pigeons, and rats to a pot shop in King's Landing.[6] Duncan later observed that Ser Kyle was not interested in the thick brown stew served at the wedding tourney at Whitewalls.[4]

Arya Stark eats bowls of brown while living on the streets of King's Landing.[2]

The quality of ingredients in brown declines as prices rise during the War of the Five Kings.[5]

Tyrion Lannister orders Bronn to kill Symon Silver Tongue, and the sellsword hints that the singer's remains will end up in a bowl of brown.[1]

A Tyrell man-at-arms is killed and two Gargelen men are scalded in a brawl at a pot-shop.[8]

When Kem reminisces about his favorite pot shop, Tyrion refers to the brown as "singer's stew".[3]

Mostly she tried not to think about the meat.[2]

Prices had risen sickeningly high on greens, roots, flour, and fruit, and Tyrion did not want to think about what sorts of flesh might be going into the kettles of the pot-shops down in Flea Bottom.[5]

Bronn: There's a pot shop I know in Flea Bottom makes a savory bowl of brown. All kinds of meat in it, I hear.
Tyrion: Make certain I never eat there.[1]

Kem: Rats wouldn't eat my mother's cooking. There was this pot shop, though. No one ever made a bowl o' brown like them. So thick you could stand your spoon up in the bowl, with chunks of this and that. You ever have yourself a bowl o' brown, Halfman?


Tyrion: A time or two. Singer's stew, I call it.
Kem: Why's that?
Tyrion: It tastes so good it makes me want to sing.


Kem: Singer's stew. I'll ask for that next time I get back to Flea Bottom.[3]
—Kem and Tyrion Lannister