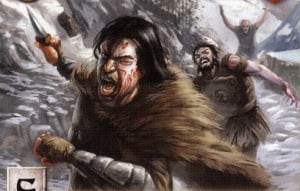 The Burned Men are one of the mountain clans of the Vale of Arryn. They are feared by the rest of the clans.

Burned Men derive their name from their coming-of-age ceremony, in which they mutilate themselves by burning off a body part of their choosing, usually a finger or nipple. The more important the body part burned, the more prestige the warrior gains.[1] They are feared by the other clans because of this practice. Red hands are war chiefs of the Burned Men.[2]

The Burned Men are seemingly an offshoot of the Painted Dogs that branched off in the years after the Dance of the Dragons. They were said to have worshiped a fire-witch, sending their boys to bring her gifts and risk the flames of her dragon to prove their manhood.[1] Gyldayn suggests this was Nettles and Sheepstealer.[3]

The Burned Men carried off the last daughter of Alys Arryn and Ser Elys Waynwood on her way to marry a Bracken.[4]

The Burned Men are among the clans that join Tyrion Lannister on the promise of weapons and armor. They are led by Timett son of Timett.[2]

In preparation for Stannis Baratheon's arrival at King's Landing, Tyrion sends the Burned Men into the kingswood to harass and harry his march.[5]

After the Battle of the Blackwater, Timett and his clansmen take their plunder and return to the Mountains of the Moon.[6] A village elder tells Sandor Clegane that the Burned Men under Timett have become fearless.[7]