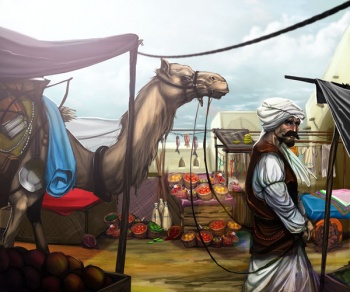 A nomad with his camel, by German Nobile © Fantasy Flight Games

A camel is an even-toed ungulate with distinctive fatty deposits, or humps, on its back. It is similar to the real world camel. Camels are used as transport in Essos, including Qarth. A camel cavalry, or camelry, is also used in combat by the Qartheen. [1] 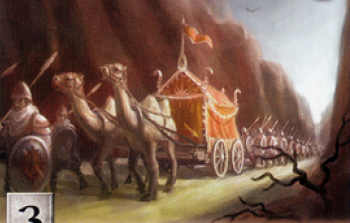 When Jhogo returns to Daenerys Targaryen and her khalasar in Vaes Tolorro, he brings Pyat Pree, Xaro Xhoan Daxos, and Quaithe. The three strangers are all riding camels, creatures Daenerys does not recognize.[2]

A column of camelry emerge from Qarth as Daenerys's honor guards upon her arrival outside of the city of Qarth. The camelry riders wear scaled copper armor and snouted helms with copper tusks and long black silk plumes. They sit high on saddles inlaid with rubies and garnets. Their camels are dressed in blankets of a hundred different hues.[1]

Daenerys discovers that horses cannot abide the close presence of camels. As she rides her silver down a great arcade her mare shies when Xaro and his camel approach her.[1]

Envoys from Yunkai come to parlay with Daenerys when she comes to conquer their city. Fifty men arrive on magnificent black horses while Grazdan mo Eraz rides a great white camel.[3]

During the wedding feast of Daenerys and Hizdahr zo Loraq in the Great Pyramid of Meereen, a dozen sorts of meat and fish is served, amongst them camel.[4]

A corps of Qartheen camelry join the Yunkai'i marching up the coast road to lay siege to Meereen.[5]