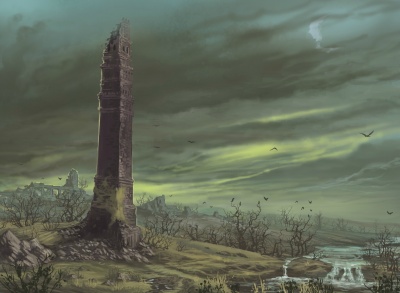 The Children's Tower is one of the three towers that remain at Moat Cailin, the others being the Gatehouse Tower and the Drunkard's Tower.

The Children's Tower is tall, slender, and green with moss. Half of its crenelations are gone from its crown, and its shattered top is open to the wind and the rain.[1]

Legend has it that the children of the forest called upon their gods from the top of Children's Tower to send the hammer of the waters and shatter the Neck.[1][2]

House Umber takes the Children's Tower as their seat when the northern host of Robb Stark stays at Moat Cailin.[1]

During the siege of Moat Cailin, Ramsay Bolton sends Theon Greyjoy to offer the ironborn garrison food and safe passage if they surrender to House Bolton unarmed. Theon sees pale faces at the battlements of the Gatehouse Tower and through the broken masonry crowning the Children's Tower. He is later informed by a guard that all of the ironborn within the Children's Tower are dead; Dagon Codd went over a few days ago and discovered two survivors eating the corpses of the deceased, so Dagon killed them both. The pale faces may thus be crannogmen who retook the Children's Tower.[2]

It looked as if some great beast had taken a bite out of the crenellations along the tower top, and spit the rubble across the bog.[1]