Ser Clayton Suggs is a knight from House Suggs and a supporter of Stannis Baratheon.[1][2] His coat of arms is a winged pig.[3]

Clayton is a short burly man with a balding head[3] and a mouthful of broken brown teeth.[4] He has pig eyes and blackheads on his nose.[5] Clayton has a deep voice[6] and is older than Lord Harwood Fell.[4]

Clayton is considered a crony[4] and the strong right hand of Ser Godry Farring.[5] He is strong and courageous but also crude and brutish.[4][5] Clayton is cruel and enjoys torturing, and his love for the Lord of Light may only be love of human sacrifice.[5]

Clayton was a hedge knight[4] of lowborn origin[7] hailing from Flea Bottom in King's Landing. According to Ser Justin Massey, Clayton gambled with Dragonstone's torturers and aided them in the questioning of prisoners, especially young women.[5]

Ser Clayton is sworn to King Stannis Baratheon. He is among the queen's men who went north to the Wall with him.[1] 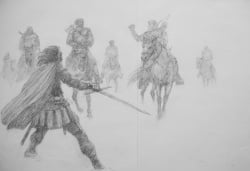 Suggs rips his longsword from its scabbard - by Marc Fishman ©

Clayton is part of Stannis's honor guard when free folk pass through the Wall to Castle Black after the battle beneath the Wall.[6] During Stannis's war council, Clayton states that Houses Hornwood, Cerwyn, Tallhart, Ryswell and Dustin are all traitors and lapdogs of the Lannisters. When Stannis dismisses his men during a meeting with Jon Snow, the Lord Commander of the Night's Watch, Clayton mutters something to Harwood Fell that makes him laugh.[4]

When Stannis's army is slowed during the march on Winterfell, Clayton agrees with Ser Godry Farring they should burn someone to appease R'hllor and end the blizzard, but the king refuses.[8] Asha Greyjoy fears Clayton will burn her because of her king's blood, as her father Balon was King of the Isles and the North.[5]

When four Peasebury men are caught committing cannibalism at a crofters' village, they are to be burned alive as a sacrifice to R'hllor. Desiring a quick death, their serjeant insults the queen's men. Clayton is goaded into quickly killing the condemned man with a knife after being called a bleeding bastard.[5] Clayton insults Asha after the sacrifices are burned, but he is interrupted by Alysane Mormont and Ser Justin Massey.[5]

When Asha later reminds Clayton that Stannis gelds men for rape, he laughs and says he would sooner see her burn.[5] When they hear riders approaching the village, Clayton tells Asha to run and warn the king, as he assumes it is Lord Roose Bolton's host upon them. However, the riders turn out to be Tycho Nestoris of the Iron Bank of Braavos and his escort, some of whom are Asha's ironborn men from Deepwood Motte.

Clayton is present along with Ser Godry Farring and Ser Richard Horpe when Stannis interrogates Maester Tybald about his loyalties. Stannis has Clayton threaten violence on the maester to make Tybald tell him everything. Clayton wants Stannis to burn Theon Greyjoy.[3]

Godry: I had forgotten that you northmen worship trees.
Clayton: What sort of god lets himself be pissed upon by dogs?[4]

A sacrifice will prove our faith still burns true, Sire.[8]

Suggs was an upjumped hedge knight, as crude as he was strong.[4]

She had seen him at the nightfires, watching, his lips parted and his eyes avid. It is not the god he loves, it is the flames, she concluded.[5]

He learned all he knows in the wynds of Flea Bottom. Were I to put you in his charge, he might strangle you with your own chain or scoop your eye out with a spoon.[3]