"Cripples, Bastards, and Broken Things" is the fourth episode of the HBO medieval fantasy television series Game of Thrones, first aired on May 8, 2011. Runtime is 56 minutes. It was written by Bryan Cogman and directed by Brian Kirk.[1] The plot revolves around Eddard Stark's investigation regarding the sudden death of his predecessor as Hand of the King. Meanwhile, Jon Snow defends a new recruit at the Wall and Viserys feels increasingly frustrated after the Dothraki horde arrives at Vaes Dothrak. The title comes from a quote from the original books maintained in the episode's script, pronounced by Tyrion Lannister after he unexpectedly helps Bran Stark by providing a design for a saddle that may allow him to ride: "I have a tender spot in my heart for cripples and bastards and broken things".

Lord Eddard Stark (Sean Bean) begins his covert inquiry into the death of the previous Hand. Questioning Grand Maester Pycelle (Julian Glover), who tended him in his final days, he learns that Jon Arryn's last words were "the seed is strong", and that he was reading a book titled "The Lineages and Histories of the Great Houses of the Seven Kingdoms". Helped by Petyr "Littlefinger" Baelish (Aidan Gillen) and his net of informers, he follows up on two more clues regarding the last days of his predecessor. He questions a smith's apprentice that Jon Arryn had visited in his last days and, due to his resemblance to King Robert, he deduces that he is the king's bastard son. He also tries to obtain information from Jon's former squire, now knighted, but he is killed while jousting at the tourney held in Eddard's honor. The knight responsible for this apparent mishap is Ser Gregor Clegane (Conan Stevens), also known as "the Mountain" due to his towering size, a Lannister bannerman and the Hound Sandor Clegane's brother.

The Dothraki horde arrives at the city of Vaes Dothrak. Viserys Targaryen (Harry Lloyd) is upset that Khal Drogo (Jason Momoa) has still not given him command of an army to conquer the Seven Kingdoms as was agreed upon when Daenerys Targaryen (Emilia Clarke) married Drogo. When he misinterprets the summons of his sister as an order, he becomes angry and strikes his sister. For the first time though, Daenerys fights back and threatens her astounded brother that the next time he raises a hand against her will be the last time he has hands. Later on, the exiled knight Jorah Mormont (Iain Glen) tells her that Viserys' inexperience would not make him a good leader to invade Westeros and bring them home, and despite what Viserys believes, the people of the Seven Kingdoms do not care who rules them as long as their life is good.

The Night's Watch receives Samwell Tarly (John Bradley), a new recruit who rapidly becomes the center of bullying of the master-at-arms Ser Alliser Thorne (Owen Teale). Sam is fat, cowardly and clumsy, but was forced by his father to take the Black and forsake his inheritance because he considered him unworthy; else, his father would kill him and pass his death off as a hunting accident. Jon Snow (Kit Harington) defends Sam and convinces the rest of the recruits not to harm him, much to Alliser's rage. Alliser defends his treatment as life north of the Wall is very harsh especially during Winter as he unfortunately learned, and warns Jon and Sam to toughen up or they will have no chance of survival.

Tyrion Lannister (Peter Dinklage) stops at Winterfell as he is returning to King's Landing after his visit to the Wall. But he gets a cold welcoming by the acting Lord Robb Stark ( Richard Madden), who suspects the Lannisters are behind his younger brother's fall and subsequent murder attempt. Despite the cold reception, Tyrion shows the now crippled Bran an act of kindness by giving him the blueprints to a unique saddle that will allow him to ride again. Before he leaves Winterfell, Tyrion has a talk with Theon Greyjoy (Alfie Allen) a ward of House Stark, and mocks him on how his family and their land, the Iron Islands attempted a rebellion but failed and the fact Theon is now a "hostage" to the Stark family. Further south, Tyrion and his small retinue stop to spend the night at the Inn at the Crossroads. There he recognizes Lady Catelyn Stark (Michelle Fairley) in disguise. With her cover blown, she requests the help of her father's bannermen present at the inn to seize Tyrion, and to face a trial.

"Cripples, Bastards, and Broken Things" is the first episode of the series that was not written by the show creators and executive producers David Benioff and D. B. Weiss. The script was authored by writer Bryan Cogman, based on George R. R. Martin's original work. Cogman worked on Game of Thrones's … pilot as a writing assistant and was contracted for the full series as script-editor and the unofficial "keeper of the mythos" for the show, entrusted with the task of writing the series bible outlining character and background information, and making sure that the world-building remained consistent. In this capacity, he was approached by Benioff and Weiss asking him to write a treatment for the fourth episode. Believing it was only an exercise that would be completely rewritten by another professional writer, he completed the script that ended up being episode 4.[2] [3] The chapters of the book covered in this episode are Bran IV (save for the first few pages that were included in the previous episode), Eddard V, Jon IV, Eddard VI, Catelyn V, Sansa II, Daenerys IV (chapters 24-29 and 36). Among the scenes created for the show, there are the conversations between Theon and Tyrion, Sansa and Septa Mordane, Doreah and Viserys, Jory Cassel and Jaime, Jon and Samwell and Eddard Stark and Cersei. The character of Alliser Thorne is given some more depth by justifying his harshness towards the new recruits, and a more subdued version of Bran's dream is included.[4]

This episode introduces the character of Samwell Tarly, the new recruit of the Night's Watch, self-described as a coward. The part was cast with John Bradley, after the actor's first professional casting after graduating from the Manchester Metropolitan School of Theatre. The scene used in the auditions belonged to "Cripples, Bastards, and Broken Things", with Sam explaining to Jon how his father forced him to take the black. According to the book's writer and the show's executive producer, George R. R. Martin, Bradley delivered "a heartbreaking performance".[5] Australian actor Conan Stevens, with a height of 214 cm (7' 1/4" ft),[6] first appears as the gigantic knight Gregor Clegane, known as "the Mountain". Conan Stevens had sought to join the production since HBO started developing Game of Thrones. Since the character of Gregor Clegane, the role he believed he was most fitted for, did not appear in the pilot he auditioned for the role of Khal Drogo instead in the hopes of getting noticed by the casting team. Indeed, although Khal Drogo's role went to Jason Momoa, Stevens was ultimately chosen for the part of the oldest Clegane brother.[7] Other recurring roles making their first appearance in the episode include Dominic Carter as Janos Slynt, Jerome Flynn as sellsword Bronn, and Joe Dempsie as the smith's apprentice Gendry. The character of Gendry was aged up considerably in relation to the books.[8] 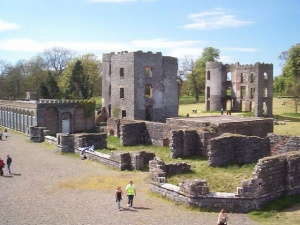 The scenes of the Tourney of the Hand were filmed at the grounds of Shane's Castle.

The episode was shot at Belfast's studio The Paint Hall and on location through Northern Ireland: The scenes taking place at the grounds of Castle Black continued to be filmed at the large exterior set built on the abandoned quarry of Magheramorne, the grounds of the ruined Shane's Castle were used as the location of the tournament, and the area known as the Sandy Brae, at the foot of the Mourne Mountains, was used for the entrance to Vaes Dothrak.[9]

During the scene in the bathtub where Viserys recalls the old Targaryen dragons, he lists names taken from the books (Balerion, Meraxes and Vhagar) and others invented for the show. Among them a dragon called Vermithrax is mentioned, which is an homage to Vermithrax Pejorative from the 1981 film Dragonslayer.[10] Author George R. R. Martin once ranked the film the fifth fantasy movie of all time, and called Vermithrax "the best dragon ever put on film", and the one with "the coolest dragon name as well".[11]

"Cripples, Bastards, and Broken Things"'s first airing was seen by 2.5 million viewers, a slight increase from last episode's 2.4 million. Including the repeat, the total for the night amounted to 3.1 million, which was also in line with last week's ratings.[12] In the UK, the viewership was significantly increased, rising to 628,000 viewers from the 510,000 figure obtained last week.[13]

"Cripples, Bastards, and Broken Things" was received with positive reviews by the critics. Todd VanDerWerff from the A.V. Club gave it an A-,[14] and Maureen Ryan from AOL TV rated it with a 70 out of 100.[15] VanDerWerff stated this was his favorite episode of the show so far, "an hour that simultaneously feels more propulsive and more relaxed than the last three". He admitted that the better part of it was given to exposition, with many monologues of the characters to expose their motivations and background. In his opinion, though, it was done skillfully and efficiently.[14] Out of the different storylines from the episode, many critics coincided in pointing out the scenes on the Wall as the best ones. Myles McNutt from Cultural Learnings wrote that "Jon Snow’s time at the Wall is maybe my favorite central location of those introduced early in the series, and it is in large part due to the work done in this episode", [16] and Maureen Ryan stated that "they're exceptionally well acted and written. John Bradley is a great addition as Samwell Tarley, and I continue to be very impressed with Kit Harington's quietly charismatic performance as Jon."[17] Besides the acting and the writing, both agreed that one of the reasons the Night's Watch scenes worked for them is that it was easy to connect with the story of a group of raw new recruits bonding up under a hard-nosed trainer who tries to prepare them to face great danger. The closing scene was praised by HitFix's Alan Sepinwall, highlighting Michelle Fairley's acting as Catelyn gathers new allies to arrest Tyrion.[18]