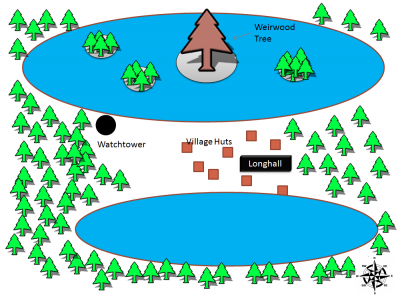 Depiction of the crofters' village by BryndenBFish

The crofters' village is an unnamed village located in the wolfswood west of Winterfell.

The village is inhabited by crofters and is located between two lakes. It consists of a few huts, a longhall, and a watchtower by the lakeshore.[2] The larger lake is dotted with small wooded islands, one of which has an ancient weirwood heart tree growing on it. The longhall has space to comfortably seat fifty men.[3]

Slowed by a blizzard while traveling through the wolfswood from Deepwood Motte to Winterfell, the army of Stannis Baratheon stops at the crofters' village. They find it abandoned, a mean and meagre place.[2] They make camp there, but the snowstorm buries the huts below mounds of snow.[2][3]

Though Benjicot Branch thought they were about three days away from Winterfell,[2] the blizzard immobilizes Stannis's army. They have limited success ice-fishing from the frozen lakes. On the eleventh day of the standstill, Stannis's army is bolstered by the arrival of Arnolf Karstark and his men, but Arnolf only brings enough supplies for his own. On the fifteenth day, Stannis's young squire Bryen Farring succumbs to the cold and hunger, and his body is burnt in a funeral pyre.[3]

On the nineteenth day, the queen's men build a pinewood pyre on the village green to burn four soldiers from House Peasebury who were caught eating human flesh. Later that day, six ironborn and two brothers of the Night's Watch bring Tycho Nestoris, Jeyne Poole, and Theon Greyjoy to the village, much to the surprise of Theon's sister, Asha.[3]

Theon is kept prisoner by Stannis inside the watchtower. Informed by a letter from Jon Snow, Lord Commander of the Night's Watch, that Arnolf plots betrayal, Stannis has the Karstarks taken into custody. Rather than have Theon burned as a sacrifice to the Lord of Light, Asha suggests to Stannis that he instead have Theon beheaded at the island's weirwood as a sacrifice to the old gods.[4]

I know them lakes. You been on them like maggots on a corpse, hundreds o' you. Cut so many holes in the ice it's a bloody wonder more haven't fallen through. Out by the island, there's places look like a cheese the rats been at. Lakes are done. You fished them out.[3]

—Ned Woods to the queen's men