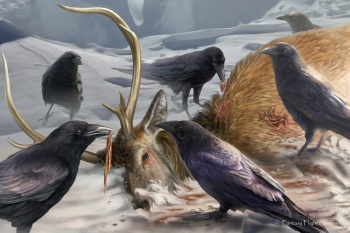 The Feast of the Crows, by Tiziano Baracchi © Fantasy Flight Games

Crows are black birds found in the known world. 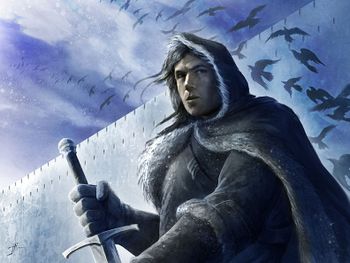 Crows at the Wall, by Jason Engle © Fantasy Flight Games

Like the larger ravens,[1] crows have a reputation for scavenging corpses.[2][3][4][5][6] Iron cages hanging from posts care called crow cages, as carrion crows can peck at prisoners held inside.[7][8][9]

Members of the black-clad Night's Watch are sometimes called crows, and their recruiters can be referred to as wandering crows.[13][14] Free folk sometimes refer to the Watch as black crows,[15][16][17][18] and the Lord Commander of the Night's Watch can be called Lord Crow by them.[17][19]

House Morrigen of Crow's Nest includes a crow in their sigil, and a Goodbrother branch resides at Crow Spike Keep. Groups named after the bird include the Stone Crows and the Stormcrows.

The crow's nest is a lookout atop a ship's mast,[20] and the lookout sailor can be called a crow's eye.[21] Storm Crow is a ship at Eastwatch-by-the-Sea.

Euron Greyjoy is known as the Crow's Eye.[22] Mors Umber has been called Crowfood after a crow pecked out his eye and he responded by biting its head off.[16]

The defeat of the Sarnori by the Dothraki became known as the Field of Crows.[6]

Some tales of Brynden Rivers claimed that carrion crows were spies who whispered secrets in his ears.[7]

Comatose after falling from the First Keep, Bran dreams of a three-eyed crow.[24]

Arya Stark sees carrion crows during her travels in the wartorn riverlands.[11][3][1]

Theon Greyjoy observes crows arriving at dusk after the battle at Winterfell,[25] and Bran sees numerous crows feasting on bodies after the sack of Winterfell.[26]

The ghost of High Heart says she dreamed of a man without a face with a drowned crow on his shoulder.[27]

Tyrion saw no bodies, but the air was full of ravens and carrion crows; there had been fighting here, and recently.[30]

The crow is the raven's poor cousin. They are both beggars in black, hated and misunderstood.[31]

Brienne: I'll leave no innocents to be food for crows.
Jaime: A heartless wench. Crows need to eat as well.[4]

Crows. When did a black bird ever bring good to a man's hall, I ask you? Never. Never.[32]

How much can a crown be worth, when a crow can dine upon a king?[33]

Crow's Eye, you call me. Well, who has a keener eye than the crow? After every battle the crows come in their hundreds and their thousands to feast upon the fallen. A crow can espy death from afar.[34]

—Euron Greyjoy to the kingsmoot