Princess Daena Targaryen, also known as Daena the Defiant, was the eldest daughter of King Aegon III Targaryen and Queen Daenaera Velaryon. She was the sister-wife of King Baelor I Targaryen, and was the mother of Daemon Blackfyre, her bastard son by the future King Aegon IV Targaryen.[1][4]

The most famous of three sisters, Daena was much loved, both for her beauty and courage.[1] Daena was wild almost from birth. A Targaryen to the bone, she was strong, beautiful, and wilful and like the rest of her siblings had Valyrian looks. Her long silver-gold hair was thick and curly, an untamed mane that framed her heart-shaped face and her sparkling purple eyes. To top it off, she had a fearless "I'll dare anything" smile.[4]

Daena was lithe and athletic.[5][4] She was an expert horsewoman and also a hunter and a fine archer. She was also practiced at riding at rings, though she was never allowed to ride in a tourney, despite her best efforts.[1]

She worshiped her father and idolized her brother Daeron.[4] She used a Dornish short recurved bow brought back by Daeron from his conquest of Dorne.[1]

Daena often dressed dramatically. As a child, she always wore black in emulation of her father. After her brother Baelor failed to consummate their marriage, she changed to all white.[1]

She always wore the golden three-headed dragon pendant she had inherited from her father. At court she wore it on a fine golden chain; when in disguise as a peasant, she hung it on a leather thong and hid it beneath her clothes. Supposedly she even wore it when bathing and when making love.[4]

The ship Princess Daena is named in her honor.[6]

Born in 145 AC, Daena was the third child and eldest daughter of King Aegon III Targaryen and Queen Daenaera Velaryon. She had two older brothers, Daeron and Baelor, and two younger sisters, Rhaena and Elaena.[7]

In 160 AC, at the age of fifteen, Daena was married to her brother Baelor.[1][8] Their marriage was an unhappy one, with her pious brother obsessed by the Faith of the Seven. Baelor refused to consummate their marriage,[1] causing Daena to dress all in white (where previously she had always dressed all black, as her father had done) and vowed not to wear anything else until she had been properly bedded, in the hope of shaming her husband. Her plan did not work, as Baelor preferred her in white, feeling it made her look more innocent.[4] 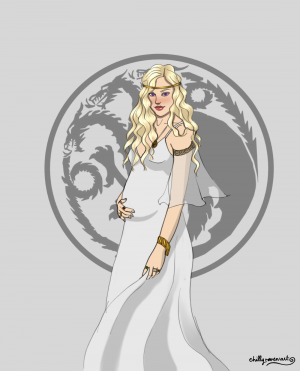 Daena the Defiant, pregnant with the future Daemon Waters, by Chillyravenart ©

King Daeron I died in Dorne in 161 AC, and Baelor ascended the Iron Throne. Early in his reign, he convinced the High Septon to dissolve his marriage to Daena, since it had never been consummated.[1][4][8] Next, the new king had Daena and her two sisters confined to their own apartments in the Red Keep,[9] which soon became known as the Maidenvault, so the sight of them would not tempt Baelor or others in his court to mortal lusts.[1][4]

During the decade she was confined in the Maidenvault, Daena quickly became known as the Defiant, for she was the most restless of the three sisters. She escaped her confinements thrice, disguised as either a servant or one of the smallfolk. Towards the end of Baelor's reign, Daena contrived to get pregnant. In late 170 AC, she gave birth to a bastard son whom she named Daemon, after her grandfather, Prince Daemon Targaryen.[1][10] She refused to name the father, who was suspected, and eventually revealed, to have been her cousin, Prince Aegon. Daemon's father was not revealed until 182 AC.[11]

The birth of Daena's son led to a fast by King Baelor I. He fasted for forty days, taking only water and a little bit of bread. On the forty-first day of his fast, he was found collapsed before the altar of the Mother.[1] After Baelor's death in 171 AC, there were some amongst the smallfolk and the lords who felt that the Iron Throne should now pass to Daena, as she was Aegon III Targaryen's eldest surviving child. However, Daena had been isolated for a decade in the Maidenvault, which had left her and her sisters without powerful allies. In addition, the memories of the Dance of the Dragons and of Rhaenyra Targaryen, the last woman to sit the Iron Throne, left many leery of the idea of a ruling queen. As well, Daena was seen by many as being wild, unmanageable, and wanton, due to her giving birth to a bastard son the year before, while still refusing to name the father. The precedents of the Great Council of 101 AC and the Dance of the Dragons were cited, and the claims of Daena and her sisters were set aside. So, the crown passed to their uncle, Viserys II Targaryen.[12]

Daena was Targaryen to the bone; strong, beautiful, willful.[4]

Lancel: Marriage requires consummation. King Baelor was made to wed his sister Daena, but they never lived as man and wife, and he put her aside as soon as he was crowned.
Jaime: The realm would have been better served if he had closed his eyes and fucked her. I know enough of history to know that.[8]