From A Wiki of Ice and Fire
Jump to: navigation, search
For the serving woman, see Dalla (Dragonstone).

Dalla is a wildling and the wife of Mance Rayder. She has a sister, Val.[1]

Val's fine white clothes were given to her by her sister.[3] 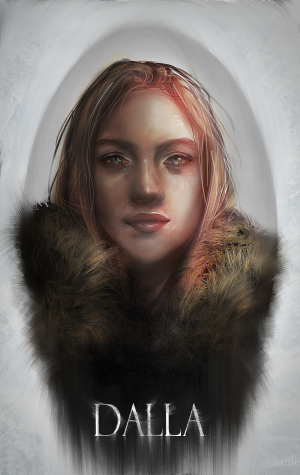 The pregnant Dalla is cooking a brace of hens when Jon Snow is brought to Mance Rayder. The King-Beyond-the-Wall informs Jon that he met Dalla during his return to the lands beyond the Wall after secretly attending King Robert I Baratheon's visit to Winterfell.[1]

Mance instructs Varamyr to protect Dalla during the battle beneath the Wall,[2] but the skinchanger is incapacitated when Melisandre burns Orell's eagle.[4] Jon protects the tent during the battle, tasking Val to act as midwife.[2] Dalla dies giving birth to a son, however.[4]

Dalla's son, the so-called wildling prince, is given over to the care of Gilly.[5] To protect the child from Melisandre, Jon switches the babe with Gilly's son, and he sends Gilly, Maester Aemon, and Samwell Tarly with Dalla's son to Oldtown. Gilly later suggests the names Aemon Battleborn and Aemon Steelsong for Dalla's child, as the boy was born during the battle beneath the Wall.[6]

We free folk know things you kneelers have forgotten. Sometimes the short road is not the safest, Jon Snow. The Horned Lord once said that sorcery is a sword without a hilt. There is no safe way to grasp it.[2]

The good woman at the brazier is Dalla. Treat her like you would any queen, she is carrying my child.[1]