Ser Dontos Hollard, called Dontos the Red,[1] is a knight and the last surviving member of House Hollard. In the television adaptation Game of Thrones, he is portrayed by Tony Way.

Dontos was the son of Ser Steffon Hollard, who died of a fever when Dontos was young.[9]

Dontos is the only surviving member of House Hollard, once close allies and vassals of House Darklyn. As a result of the Defiance of Duskendale, both houses were destroyed and their blood exterminated. Only young Dontos was spared because Ser Barristan Selmy asked for clemency. As Barristan had rescued Aerys II Targaryen during the Defiance, the king granted Barristan's wish.[9]

Young Dontos was taken to King's Landing to serve as a squire. He never returned to Duskendale.[9]

Dontos has won no renown or tourneys as a knight.[2]

Ser Dontos is at court in King's Landing after King Joffrey I Baratheon's ascension to the Iron Throne. When Sansa Stark, Joffrey's betrothed, comes to plead mercy for her father, Lord Eddard Stark, a drunken Dontos starts to hail her but is warned away by Ser Balon Swann. Sansa sees Lord Petyr Baelish chatting with Dontos and Balon.[7] Joffrey eventually orders Eddard's execution.[10] 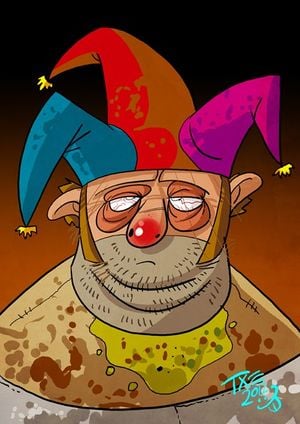 Intending to ride in the tourney on King Joffrey's name day at the Red Keep, Dontos's first match is against Lothor Brune. However, Dontos is too drunk, arriving in the lists naked except for his breastplate and helm. Dontos gives up chasing his stallion and asks for wine. Joffrey, taking this as a personal insult, commands that Dontos be put to death via drowning in a cask of wine. However, the pleading of Sansa saves his life, and Dontos is stripped of his knighthood and made a fool,[1] joining Moon Boy.[11]

Sansa receives an anonymous note saying, "come to the godswood tonight if you want to go home".[2] In the godswood, Sansa meets Dontos, who promises to help her escape her imprisonment. Drawing inspiration from the tales of Florian the Fool and Jonquil, Dontos pleads to serve Sansa, and he asks for patience for they can only escape at the right time. Dontos insists they can only meet secretly in the godswood.[2] During one visit, Dontos tells Sansa that a friend of his will hire a ship to take them away when the time is right.[8]

Dontos wears red and yellow motley.[8] Since Dontos was unable to ride his destrier at the tourney, Joffrey decrees that the new fool must always be horsed. Dontos uses a broomstick horse as his new steed. He wears tin armor and carries a melon as his morningstar. When Joffrey orders Sandor Clegane to hit Sansa, Dontos intervenes and whacks the girl on her head with the melon. A displeased Joffrey responds by having Ser Boros Blount punch and humiliate Sansa.[12]

During the Battle of the Blackwater, Dontos serves as a fool in the Queen's Ballroom in Maegor's Holdfast, attempting to entertain the ladies taking shelter there by chasing them on his fake horse.[13] When the battle appears to go bad for the defenders, Dontos tells Sansa to lock herself in her bedroom.[11] After the battle ends, a joyous Dontos comes to Sansa's room to tell her that the Lannisters have won with the help of the Tyrells.[11]

It is announced at the award ceremony after the battle that King Joffrey will wed Margaery Tyrell instead of Sansa. Dontos meets Sansa in the godswood and warns her that she will be Joffrey's hostage, however. The fool says they will flee the night of Joffrey's wedding, and he gives her a silver hair net with black amethysts from Asshai.[14]

Sansa tells Ser Dontos of the Tyrell plot to marry her to Willas Tyrell, saying she will no longer need his help to escape. Dontos warns her not to trust the Tyrells, stating they only want Sansa's claim to Winterfell.[15] Dontos informs Lord Petyr Baelish of this plot, and Petyr then informs Lord Tywin Lannister, the Hand of the King. Tywin prevents the marriage by plotting to have Sansa married to his son Tyrion Lannister instead.[16] Dontos attends the wedding of Sansa to Tyrion, where he is used as a footstool by Tyrion so that the dwarf can place the marriage cloak around the shoulders of the much taller Sansa.[3] Dontos dances with Moon Boy during the wedding feast.[3]

Sansa continues to meet Dontos secretly in the godswood every night,[17][18] where he reassures her that she will escape the night of Joffrey's wedding, what clothing she should prepare for the escape, and that she must wear to the wedding the hair net he gave her.[4]

On the morning of Joffrey's wedding to Margaery Tyrell, Dontos gallops by on his broomstick horse as nobles break their fast in the Queen's Ballroom.[19] After the wedding, Moon Boy throws dates at Dontos during the wedding feast.[20] Joffrey chokes to death during the feast, and Queen Cersei Lannister accuses Tyrion and Sansa—who has already fled the throne room in terror[4]—of murder.[20]

Sansa meets a drunken Dontos in the godswood, and the girl realizes that one of the amethysts from her hair net is missing. Instead of his fool's motley, Dontos has donned his old Hollard surcoat.[4] After the pair discretely leave the Red Keep, Oswell Kettleblack rows them into Blackwater Bay on a small skiff. Oswell takes the pair to Merling King, aboard which are Lord Petyr Baelish and Ser Lothor Brune. Once Sansa and Oswell board the ship, Dontos asks for his payment of ten thousand golden dragons, as promised by Petyr, before he rows back to the capital. Instead, Petyr orders Dontos killed. Three men step onto the gunwale, raise their crossbows, and fire. One bolt takes Dontos in the chest, while the others rip into his throat and belly. When it is done, Lothor tosses a torch on top of the corpse, burning the skiff with the drunkard.[4] Petyr justifies the murder to Sansa by claiming that once Dontos had spent his gold on wine, he would have sold the information he had about her to another party. He also tells Sansa he was the one behind Dontos's actions since she saved his life at the tourney.[4]

The Lannisters unsuccessfully search King's Landing for Dontos and Sansa. During Tyrion's trial for murder, Grand Maester Pycelle says Joffrey had been poisoned with the strangler.[21] When Varys helps Tyrion escape, the master of whisperers reveals that Dontos and Sansa had been spotted on the serpentine steps of the Red Keep on the night of Joffrey's death, but they have not been seen since.[22]

At the Baelish tower in the Fingers, Petyr tells Sansa that Dontos was not involved in Joffrey's murder, except for making sure that she wore the hair net to the wedding. Petyr instead suggests that Olenna Tyrell removed the amethyst from Sansa's hair net and poisoned Joffrey.[23]

Brienne of Tarth, who has sworn to find and save Sansa Stark, learns that Dontos disappeared from King's Landing at the same time Sansa did, and decides he must have helped her escape. She searches for Sansa and Dontos, asking travelers if they have seen a highborn maid of three-and-ten with blue eyes and auburn hair, accompanied by a portly man who may be dressed as a fool or a knight.[6] Brienne encounters Ser Shadrich the Mad Mouse, who perceives the identities behind her questions, and tells her he is also seeking Sansa and Dontos for the large reward Varys has offered.[6]

At Duskendale, Brienne speaks to the maester of the Dun Fort, who tells her of the Defiance of Duskendale and the destruction of all of House Hollard except for Dontos. The maester tells her Dontos never returned to Duskendale, and that if he did help murder King Joffrey, he feels he would hide anywhere but Duskendale. At the Seven Swords, a pious dwarf tells Brienne that he had seen a fool in motley at Maidenpool.[9]

While traveling to Maidenpool, Brienne sees the ruins of a Hollard castle, and she thinks Dontos may have been born there.[9] Dick Crabb guides Brienne from Maidenpool to Crackclaw Point in search of a fool who had been seeking a ship from Westeros. At the Whispers, however, Brienne discovers that the fool in question is Shagwell, formerly of the Brave Companions.[24]

Pretending to be Alayne Stone at the Eyrie, Sansa remembers Dontos as her poor old drunken Florian.[25] 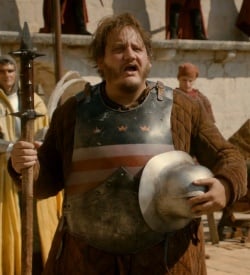 Tony Way as Dontos in Game of Thrones

Dontos: I lose. Fetch me some wine.
Joffrey: A cask from the cellars! I'll see him drowned in it.[1]

—Dontos and Joffrey I Baratheon

Sansa: You're drunk, aren't you?
Dontos: Only one cup of wine, to help my courage.[2]

Dontos: I know it's queer, but ... all those years I was a knight, I was truly a fool, and now that I am a fool I think ... I think I may find it in me to be a knight again, sweet lady. And all because of you ... your grace, your courage. You saved me, not only from Joffrey, but from myself. The singers say there was another fool once who was the greatest knight of all ...


Dontos: Sweet lady, I would be your Florian.[2]
—Dontos and Sansa Stark

Sansa: What stones are these?


Dontos: Lovelier than you know, sweet child. It's magic, you see. It's justice you hold. It's vengeance for your father. It's home.[14]
—Sansa Stark and Dontos

A fool. You're so clever, to see it. He's better fitted to be a fool than a knight, isn't he? You ought to dress him in motley and make him clown for you.[1]

—Sansa Stark to Joffrey I Baratheon

Sansa: You killed him.
Petyr: My lady, your grief is wasted on such a man as that. He was a sot, and no man's friend.[4]

Ser Dontos the Red was a skin of wine with legs.[23]