From A Wiki of Ice and Fire
(Redirected from Dothraki Sea)
Jump to: navigation, search 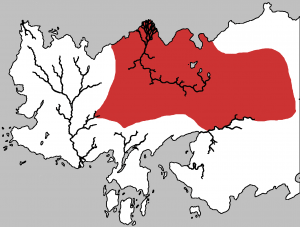 The Dothraki sea's location on the continent of Essos 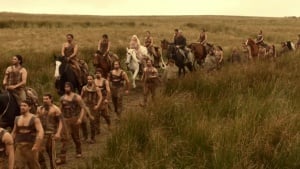 Dothraki traveling through the Dothraki sea in Game of Thrones 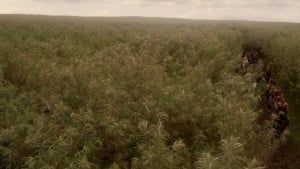 The Dothraki sea[1][2][3][4] is a vast inland region of the continent of Essos, located east of the Free Cities, north of Slaver's Bay, and west of the Bone Mountains. Its landscape of steppes and plains is home to the nomadic Dothraki equestrian people, who constantly battle each other and raid surrounding lands.

The region is also known as the Haunted Lands and the Great Desolation after the dozens of ruins of the cities destroyed and nations conquered by the Dothraki. Before the Century of Blood, it was referred to as the grasslands and is considered by Maester Yandel as the birthplace of civilization, where the first true towns arose beside the banks of the Sarne and its myriad vassal streams.[5]

The histories of those days are lost, for these "kingdoms of the grass" rose and fell before the invention of writing. Only legends and tales survive, including those of the realm of the Fisher Queens beside the inland Silver Sea, the savage Hairy Men, the lost city of Lyber, the woods walkers in the forests on the shores of the Shivering Sea, and, to the east, the kingdoms of the centaurs.[5]

Some maesters believe the First Men originated on the grasslands before beginning the migration that took them to the Arm of Dorne. The Andals may too have arisen in the fertile fields south of the Silver Sea. What is known, however, is that these lands were the home of peoples such as the Cymmeri, the Zoqora, and the Gipps in the central grasslands, the Qaathi to the southeast, and the Tagaez Fen.[5]

Its only inhabited city, Vaes Dothrak, lies at the heart of the sea, and is home and heart to the Dothraki people and culture. Save for Vaes Dothrak and some Valyrian roads in the west near the Forest of Qohor,[6] there are no other surviving roads, hills, or cities, leaving an ocean of unbroken rippling grass, for which the Dothraki sea is named.

Over a hundred types of grass grow on the plains, often growing thick and taller than a man's head and from afar look like a sea, as it rolls like waves in the breeze.[7][8] Some rivers run through the lands, though they are often shallow and shift with the seasons; overall sand is more prevalent than water.[8] The grass is inhabited by packs of wild dogs, herds of free-ranging horses, and rare hrakkar.

Located in the inland of Essos, east of the Free Cities, the Dothraki sea begins in the west at the Forest of Qohor. To the north it overlaps the ruined Kingdom of Sarnor, Kingdom of Omber, and the forested Kingdom of the Ifequevron. The Dothraki sea extends eastward to the Bone Mountains and the Krazaaj Zasqa and as far southeast as the desert wasteland called the red waste.

To the south the Dothraki sea is bounded by the Painted Mountains, Slaver's Bay, and the Skahazadhan. South of the river is Lhazar, which is often raided by the Dothraki. The Dothraki sea is so immense it can support more than two dozen khalasars,[9] each riding its own circuit and taking what is needed from the land as they go.

A single massive mountain is located in the region, the Mother of Mountains, which rises at the heart of the Dothraki sea, at the city of Vaes Dothrak. Nearby is the lake called the Womb of the World.

In the west is Vaes Khadokh, originally a colony of the Valyrian Freehold. To the north-east in the vicinity of the Kingdom of the Ifequevron are Vaes Leisi and Vaes Aresak.

Vaes Diaf is an isolated ruined Ghiscari city in the central Dothraki lands. Ghiscari ruins by the Skahazadhan along the southern Dothraki sea are:

At the eastern extremity of the Dothraki sea where it meets the Bone Mountains are:

South-east of the Dothraki sea in the red waste are four cities of the Qaathi given Dothraki names:

Chapters that take place in the Dothraki sea

The frightened child who sheltered in my manse died on the Dothraki sea, and was reborn in blood and fire.[10]

Where is this Dothraki sea? I will sail the Iron Fleet across it and find the queen wherever she may be.[11]

—Victarion Greyjoy to a fisherman, upon hearing of Daenerys Targaryen's disappearance into the Dothraki sea