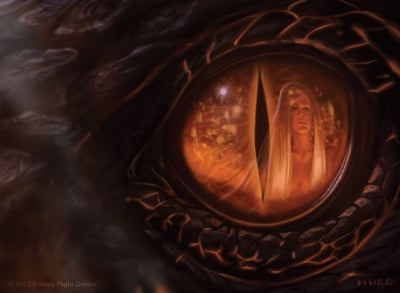 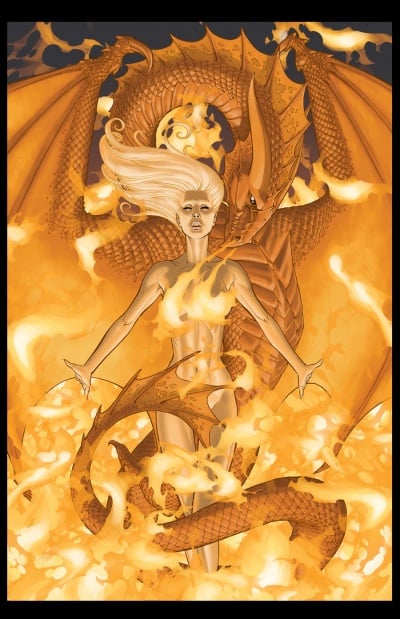 Dragon dreams affect those with the blood of the dragon, who are known to have premonition-like dream ability - they are no ordinary dreams. They often involve dragons but not always.

Dragon dreams appear to have haunted those with the blood of the dragon throughout the generations; some more than others.

Members of House Targaryen and House Blackfyre have had these dreams.

When Daenys Targaryen was still a maiden,[1] she had visions, including a powerful prophetic dream that Valyria would be destroyed. Her father had enough faith in her prophetic abilities to relocate his family to Dragonstone. Valyria and all the other dragonlords were destroyed twelve years later.[2]

Daenerys Targaryen has dragon dreams preceding the birth of her three dragons. She dreams of a black dragon prior to her wedding day:[3]

Viserys was hitting her, hurting her. She was naked, clumsy with fear. She ran from him, but her body seemed thick and ungainly. He struck her again. She stumbled and fell. He struck her again. She stumbled and fell. “You woke the dragon,” he screamed as he kicked her. “You woke the dragon, you woke the dragon.” Her thighs were slick with blood. She closed her eyes and whimpered. As if in answer, there was a hideous ripping sound and the crackling of some great fire. When she looked again Viserys was gone, great columns of flame rose all around, and in the midst of them was the dragon. It turned its great head slowly. When its molten eyes found hers, she woke, shaking and covered with a fine sweat.[3]

Newly wedded, when she is despairing in the Dothraki Sea, and feeling that she cannot go on, she dreams of a black dragon.[4]

There was only her and the dragon. Its scales were black as night, wet and slick with blood. Her blood, Dany sensed. Its eyes were pools of molten magma, and when it opened its mouth, the flame came roaring out in a hot jet. She could hear it singing to her. She opened her arms to the fire, embraced it, let it swallow her whole, let it cleanse her cleanse her and temper her and scour her clean. She could feel her flesh sear and blacken and slough away, could feel her blood boil and turn to steam, and yet there was no pain. She felt strong and new and fierce.[4]

After the birth of her three dragons, Daenerys Targaryen seems to no longer be dreaming of the black dragon, but she is plagued by other dreams and visions.

The night before the sack of Astapor, aboard the Balerion, Daenerys Targaryen has what may be a prophetic dream that may involve the Others:

That night she dreamt she was Rhaegar, riding to the Trident. But she was mounted on a dragon, not a horse. When she saw the Usurper’s rebel host across the river they were armored all in ice, but she bathed them in dragonfire and they melted away like dew and turned the Trident into a torrent. Some small part of her knew that she was dreaming, but another part exulted. This is how it was meant to be. The other was a nightmare, and I have only now awakened.[5]

As Queen of Meereen she chains Viserion and Rhaegal in the darkness of the Great Pyramid's pit and Drogon is lost to her in the Dothraki Sea. She is finding herself vexed by nightmares, and her dreams have changed, no longer offering her succour:

Beneath her coverlets she tossed and turned, dreaming that Hizdahr was kissing her … but his lips were blue and bruised, and when he thrust himself inside her, his manhood was cold as ice.[6]

I see them in my dreams, Sam. I see a red star bleeding in the sky. I still remember red. I see their shadows on the snow, hear the crack of leathern wings, feel their hot breath. My brothers dreamed of dragons too, and their dreams killed them, every one. [7]

As he weakens he spends more time sleeping. Sometimes he would call for Sam, insisting that he had to tell him something, but he would often forget what he meant to say by the time Sam arrived. Even when he did recall his talk was all a jumble. He spoke of dreams and never named the dreamer, of a glass candle that could not be lit and eggs that would not hatch. He said the sphinx was the riddle, not the riddler. He asked Sam to read for him from a book by Septon Barth, whose writings had been burned during the reign of Baelor the Blessed. Once he woke up weeping, wailing:

the dragon must have three heads…but I am too old to be one of them. I should be with her, showing her the way, but my body has betrayed me. [8]

He mentions "the prophecy" and his "brother’s dream" to Sam - but does not mention what prophecy or which brother to Sam, or what the dream entailed. [8]

Prince Daeron Targaryen told Dunk about a dream he had. A great red dragon would fall on Ser Duncan, dead, but the knight would walk off alive. He said he did not know what it meant, but that his dreams came true and that he was scared of Dunk. The dream turned out to be metaphorical, referring to the death of Prince Baelor Targaryen.[9]

"I'm not stupid, ser. Someday the dragons will return. My brother Daeron's dreamed of it, and King Aerys read it in a prophecy. Maybe it will be my egg that hatches. That would be splendid."[10]

Daemon II Blackfyre, in the guise of 'John the Fiddler', talks to Duncan, saying that he recognized him on the road. Duncan had appeared to him in a dream in which Duncan wore the all-white armor of the Kingsguard. The Fiddler says his dreams always come true, as he dreamt his brothers dead once and also a dragon hatching from an egg at Whitewalls.[10]

There have always been Targaryens who dreamed of things to come, since long before the Conquest.[10]