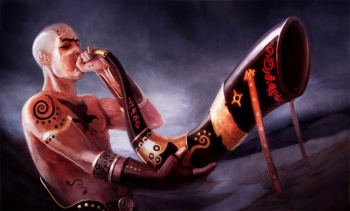 A dragon horn is a sorcerous horn used to control dragons.

Dragon horns originated from the Valyrian Freehold. The dragonlords of old sounded such horns, before the Doom of Valyria devoured them.[1][2]

According to Valyrian legend, the hellhorns brought death and destruction down on all those who heard their sound.[3]

Euron Greyjoy brings to the kingsmoot what he claims to be a dragon horn he found amongst the smoking ruins of Valyria. The horn's noise silences all and ends the possible fight between the supporters of Victarion and Asha Greyjoy.[1]

Wandering the Dothraki sea, Daenerys recalls that the dragonlords of Valyria had controlled their mounts with binding spells and sorcerous horns.[2] With Drogon she has to make do with a word and a whip.