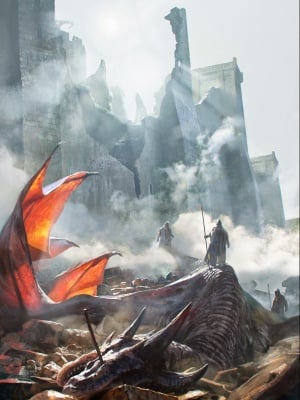 Meraxes, slain by a scorpion's iron bolt to the eye

A dragonslayer is someone who has slain a dragon. There are legends of dragonslayers in Westeros's distant past.

According to tales, some Warrior's Sons were dragonslayers.[1]

Several dragons were slain during the storming of the Dragonpit.[2] In 135 AC the newly hatch dragon of Laena Velaryon attacked her and was in return killed by her father, Lord Alyn Velaryon.[3]

It is no easy thing to slay a dragon, but it can be done.[8]

Who do you think killed all the dragons the last time around? Gallant dragonslayers armed with swords?[9]