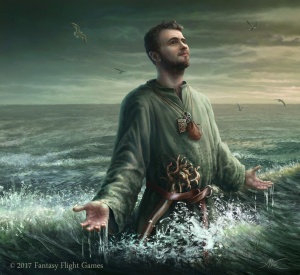 Aeron Greyjoy makes his drowned men by having them submerged in salt water a second time in earnest and brought back to life with the kiss of life. Not all men are successfully revived, however, but Aeron himself has never failed in a resuscitation.[1]

The drowned men wear roughspun robes of mottled green, grey, and blue, the colors of the Drowned God. They carry driftwood cudgels to show their devotion in battle, and skins of saltwater to perform ritual anointment as well as to sate their thirst.[1][4] 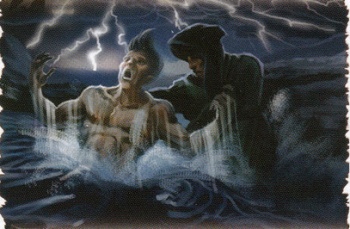 Aeron Greyjoy is baptizing four new drowned men when he is told about his brother Balon's death.[1] His drowned men call out for Aeron to become their king, but he refuses and decides to call a kingsmoot instead.[1]

Aeron's drowned men accompany him to the kingsmoot on Old Wyk.[5] After Euron Greyjoy is chosen as king, Aeron disappears, and not even his drowned men know where he went.[6]

Although Aeron Damphair has not been seen since the kingsmoot, his drowned men claim he is hiding on Great Wyk and will soon come forth to call down the wroth of the Drowned God on Euron and his supporters.[2] Erik Ironmaker is hunting down the drowned men to search for Aeron.[2]

The Sparr: These are not matters I would speak of here before these others.
Aeron: These others are my drowned men, god's servants, just as I am. I have no secrets from them, nor from our god, beside whose holy sea I stand.[1]

—The Sparr and Aeron Greyjoy

The god took me deep beneath the waves and drowned the worthless thing I was. When he cast me forth again he gave me eyes to see, ears to hear, and a voice to spread his word, that I might be his prophet and teach his truth to those who have forgotten.[1]

—Aeron Greyjoy to his drowned men