The Eyrie is an ancient castle and seat of House Arryn, one of the oldest lines of Andal nobility, within the Vale of Arryn. It is situated in the Mountains of the Moon astride the peak known as the Giant's Lance, several thousand feet above the valley below. Although small compared to the seats of other Great Houses in Westeros, the Eyrie is considered impregnable to attack. During winter years, the Arryns seek refuge against the cold at the base of the mountain in the Gates of the Moon.[1]

See also: Images of the Eyrie 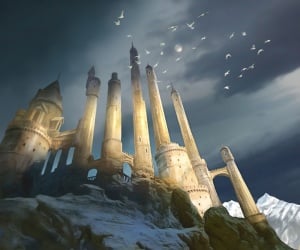 The Eyrie is the smallest of the great castles, consisting only of a cluster of seven slim, white towers bunched tightly together. They can hold up to five hundred men.[2] The castle is made of fine white stone.[3] The towers encircle a garden, which had been meant as a godswood, but no weirwood heart tree would take root in the stony soil.[4] The garden, which is overlooked by Lady Lysa Arryn's apartments, instead contains grass, shrubbery, and statuary.[5]

The barracks and stables are carved directly into the mountain. The granary is as large as those found in much larger castles, like Winterfell.[2] The Eyrie also contains a sept.[3] The waterfall known as Alyssa's Tears can be heard from the Eyrie.[6] The castle's household guard wear sky-blue cloaks.[7] Falcons fly near the castle.[2][6] 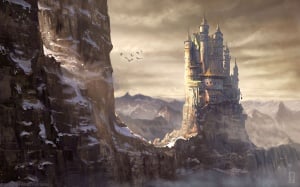 To reach the Eyrie, an invading army would have to overcome the Bloody Gate guarding the high road, then overcome the Gates of the Moon located at the bottom of the Giant's Lance and climb a narrow goat trail. Under normal circumstances this would take half a day, all the while being exposed to attack from the defenders in the Eyrie and its three waycastles along the path.[2]

Kings of Mountain and Vale 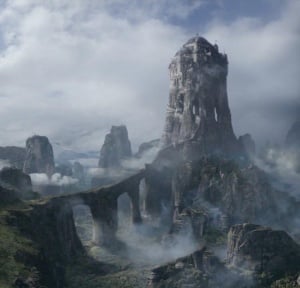 The Eyrie as depicted in Game of Thrones

Legends claim that the Winged Knight drove the First Men from the Vale and flew to the top of the Giant's Lance on a huge falcon to slay the Griffin King.[10][11] Records indicate that the Andal king Artys I Arryn constructed the Gates of the Moon at the foot of the Giant's Lance, where he had defeated Robar II Royce's army of First Men in the Battle of the Seven Stars.[12]

Artys's grandson, Roland I Arryn, believed that the Gates of the Moon was both inferior to Casterly Rock and the Hightower and strategically vulnerable to raids from the Vale mountain clans. Allegedly inspired by Teora Hunter, Roland decided to build a new royal palace high in the mountain above the Gates of the Moon.[1]

Construction of the Eyrie took place intermittently over generations, and marble was imported from Tarth in the narrow sea, as Roland disliked the appearance of stone available in the Vale. The first maester to serve at the Eyrie was Quince.[1] The Eyrie was inhabited as a pleasure palace[13] for the Kings of Mountain and Vale during spring, summer, and autumn. The Arryns descend to the larger Gates of the Moon for winter[1] and host a feast when they return to the Eyrie in the spring.[3]

During Aegon's Conquest, Queen Regent Sharra Arryn fortified the Bloody Gate and the boy king Ronnel Arryn used the Eyrie as a refuge. Visenya Targaryen, however, flew upon Vhagar to the Eyrie's inner courtyard. Realizing that the Eyrie's location could not protect them against dragons, the Arryns submitted to House Targaryen and the new Lord of the Seven Kingdoms, Aegon I Targaryen.[14]

Jonos Arryn usurped his brother, Lord Ronnel, and took control of the Eyrie during the reign of King Aenys I Targaryen. Once Lord Royce began hunting the rebels, Jonos threw Ronnel through the Moon Door. Prince Maegor Targaryen rode the dragon Balerion to the Eyrie, where he hanged Jonos.[15]

Eddard Stark and Lord Robert Baratheon were fostered at the Eyrie by Lord Jon Arryn. When King Aerys II Targaryen called for the boys to be sent to King's Landing, Lord Arryn refused and raised his banners in revolt, thus beginning what would become Robert's Rebellion. After winning the war, Jon was named Hand of the King to the new monarch, Robert I. In Jon's absence, the Eyrie was ruled by Nestor Royce, acting as High Steward of the Vale.[2]

The singer Tom of Sevenstreams was once sent from the Eyrie by Jon's wife, Lady Lysa Arryn, and forced to take the high road.[16] 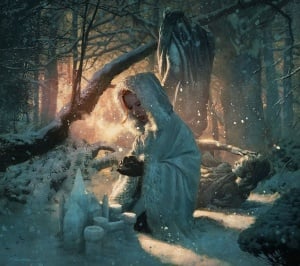 Sansa Stark sculpts a snow castle at the Eyrie, slowly forming it into a replica of her childhood home, Winterfell by Michael Komarck ©

After Lord Jon Arryn's death in King's Landing, his widow Lysa travels to the Eyrie with their son, Lord Robert Arryn.[17] Lysa's sister, Catelyn, captures Tyrion Lannister and brings him to the Eyrie, where Lysa imprisons him in the sky cells, although he escapes after demanding trial. The captain of the guards, Ser Vardis Egen, is killed in trial by combat against the sellsword Bronn.[2][8][5]

Stannis Baratheon rejects Maester Cressen's suggestion to have Shireen Baratheon fostered at the Eyrie.[18] Robb Stark, the King in the North, sends ravens to the Eyrie seeking assistance from his aunt, Lysa, but there is no response.[19]

The widowed Lady Lysa marries her childhood friend and lover, Petyr Baelish, at the Fingers.[20] Petyr takes Sansa Stark in the guise of "Alayne Stone" with them to the Eyrie. Sansa finds the castle an empty and lonely place, and Lady Arryn keeps the High Hall closed most of the time. Petyr later throws Lysa from the Moon Door and places blame on Marillion.[4]

Lord Baelish is left as Lord Protector of the Vale, ruling in the name of the child Lord Robert Arryn. When Nestor Royce visits the Eyrie, Petyr informs him he is now the Lord of the Gates of the Moon.[7]

The Lords Declarant encamp with six thousand men before the Gates of the Moon. Petyr meets with the six lords in his solar, rather than the High Hall, and they agree to grant Petyr a year to bring order to the Vale.[6]

With the arrival of winter, the court leaves the Eyrie for the Gates of the Moon.[3] 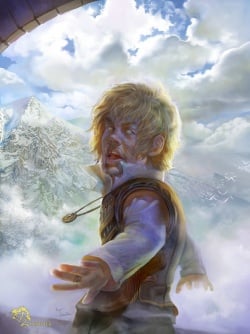 Tyrion Lannister in a sky cell by Tim Teiiku ©

The most splendid work ever built by the hands of men, a palace worthy of the gods themselves. Surely even the Father Above does not have such a seat.[21]

Seven towers, Ned had told her, like white daggers thrust into the belly of the sky, so high you can stand on the parapets and look down on the clouds.[2]

The Eyrie is impregnable. You saw for yourself. No enemy could ever reach us up here.[2]

Petyr: Have Maddy lay a fire in the solar. I shall receive our Lords Declarant there.


Sansa: Not the High Hall?


Petyr: No. Gods forbid they glimpse me near the high seat of the Arryns, they might think that I mean to sit in it. Cheeks born so low as mine must never aspire to such loft cushions.[6]
—Petyr Baelish and Sansa Stark

In winter this will be a cold white prison.[3]

Chapters that take place at the Eyrie

According to George R. R. Martin, Neuschwanstein is an inspiration for the Eyrie.[22]