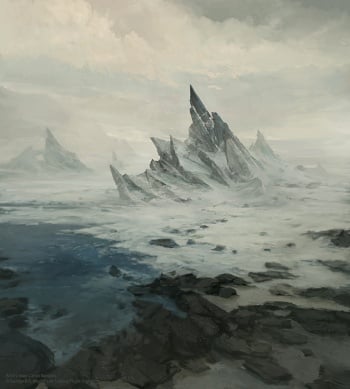 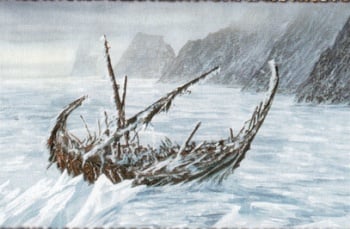 The Frozen Shore is a stretch of coastline that sits on the Bay of Ice beyond the Wall.[1]

Some accounts state gods of snow and ice are worshipped in the Frozen Shore.[4]

During the reign of King Dorren Stark, Redwyn of the Night's Watch claimed he encountered giants and children of the forest while ranging from the Shadow Tower to Lorn Point.[5][6]

Before Mance Rayder negotiated a peace, the men of the Frozen Shore fought with those of the ice-river clans.[7]

Mance Rayder, the King-beyond-the-Wall, tells Jon Snow that his cloak of black wool and scarlet silk was a gift from the wildling woman who patched him up. The scarlet silk was her grandmother's most prized possession, which she found in the wreck of a cog from Asshai off the Frozen Shore.[8]

Men of the Frozen Shore are found in Mance's army as it attacks the Wall.[9]