Galbart Glover is the head of House Glover and Master of Deepwood Motte. He is unwed.[3] Larence Snow, the bastard of Hornwood, is a ward of Galbart.[4] In the television adaptation Game of Thrones, Galbart is portrayed by Mark Coney.

The tactful Galbart is considered a good, loyal, and steady man, if unexceptional.[5]

After Lord Eddard Stark is shown the Valyrian steel dagger by his wife, Catelyn, Eddard tasks her with having Galbart and Ser Helman Tallhart fortify Moat Cailin with a hundred bowmen each.[7]

When Robb Stark calls the banners to Winterfell, Galbart's brother, Robett, unsuccessfully asks for command.[8] Galbart is part of Robb's war council at Moat Cailin,[9] and he warns Robb not to trust Lord Walder Frey.[10] When the northern host splits at the Twins, he stays with Robb, participating in the battle in the Whispering Wood[11] and the Battle of the Camps. Following the battles, Galbart prays in Riverrun's godswood. He objects to supporting King Joffrey I Baratheon and is in attendance when Robb is proclaimed King in the North at Riverrun.[12] 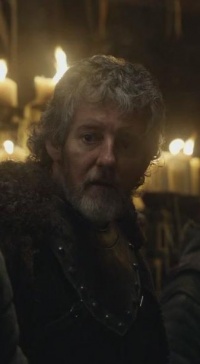 Mark Coney as Galbart Glover in Game of Thrones

After the Battle of Oxcross, Galbart raids along the coast of the westerlands.[15]

Galbart returns to Riverrun with Robb.[16] When news reaches Riverrun of Robett's capture at Duskendale, Galbart fears for his brother's life.[17] It is partly that fear that causes King Robb Stark to trade Martyn Lannister for Robett.[5]

Galbart is among the northern lords that march with Robb to the Twins to attend the wedding of Lord Edmure Tully. With Ser Brynden Tully remaining at Riverrun as Warden of the Southern Marches, Galbart is named commander of Robb's scouts and outriders. With the Blue Fork in flood, Galbart is unable to cross at Ramsford and is rescued after clinging to rocks.[5]

On the way to the Twins, after receiving news of the death of King Balon Greyjoy, Robb advances his plan to retake Moat Cailin while Lord Captain Victarion Greyjoy is away. Galbart is ordered by Robb to go with Lord Jason Mallister and Lady Maege Mormont to Seagard and sail up the Neck to find Greywater Watch so that the crannogmen can direct Robb's army around the rear of the ancient fortress.[5] Robb is killed in the Red Wedding, however.[18] Though Jason later remains at Seagard, Galbart's and Maege's whereabouts are currently unknown.

Returning to Deepwood after the kingsmoot, Asha feels ill at ease in Galbart's home. Stannis Baratheon defeats Asha in the fight by Deepwood Motte[19] and offers to restore the castle to House Glover.[20]

You must not do this, my lord. Lord Walder is not to be trusted.[10]

Ser Brynden had played a part in every victory her son had won. Galbart Glover had taken command of the scouts and outriders in his place; a good man, loyal and steady, but without the Blackfish's brilliance.[5]

Deepwood be Galbart Glover's seat. No home for squids.[19]

—a Flint to Asha Greyjoy