Gendry is a blacksmith apprentice for Master Tobho Mott in King's Landing. He does not know he is a bastard son of King Robert I Baratheon.[5] In the television adaptation Game of Thrones, Gendry is portrayed by Joe Dempsie.

Gendry is of a similar age to Robb Stark. Tall and muscled, he has blue eyes and thick, black hair.[5] When he grows a beard, it is also thick and black.[6] Gendry looks like a young Renly Baratheon, albeit with a squarer jaw, bushier brows, and tangled hair.[4]

The apprentice is skilled at smithing but is not a good horseman.[8] Gendry made a rounded and curved steel helm shaped like a bull's head, with a slit visor and two great curving metal horns.[5][11] While Gendry often polishes the helm, he is reluctant to wear it.[11]

Gendry was born in King's Landing, but he does not know that his father is King Robert I Baratheon.[4] His mother, a worker at an alehouse, died when he was still a young boy. All he remembers of her was that she had blond hair.[5]

Gendry saw King Robert from afar at tourneys and once at the Great Sept of Baelor. A drunken Robert also once nearly rode down Gendry when the boy was playing near the Mud Gate.[4]

Tobho Mott, a master smith, took Gendry on as an apprentice after being paid double the customary fee by a stout brown-bearded man with a hooded face.[5] Lords Jon Arryn and Stannis Baratheon called upon Tobho and Gendry during their investigation into Robert's children.[5] 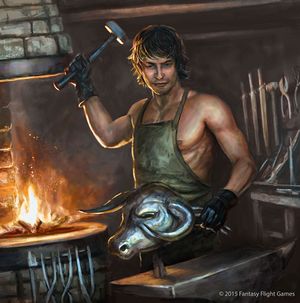 When Lord Eddard Stark investigates the death of Lord Jon Arryn, his predecessor as Hand of the King, Eddard meets several people who had met with Jon shortly before his death, including Master Tobho Mott and his apprentice, Gendry. At once Lord Stark sees the similarity with King Robert I Baratheon and recognizes that Gendry is his bastard. The promising Gendry has made a helmet in the shape of a bull. Eddard compliments the helmet, offering to purchase it, but Gendry refuses, to the shame of Tobho. Eddard tells the master smith that if Gendry ever shows interest in wielding a sword, he should send him to Eddard.[5] Tobho gives Gendry a piece of metal so he can make his first sword.[12] Before the youth can do so, however, arrangements are made by Lord Varys for Yoren of the Night's Watch to take Gendry to the Wall with him, to protect him from Cersei.[13] Gendry travels north with Yoren and thirty other recruits, including a disguised Arya Stark, Lommy Greenhands, Hot Pie, Jaqen H'ghar, Rorge, Biter, and others.[14] After Praed passes away, his longsword of cheap steel is given to Gendry by Yoren.[15]

In the aftermath of Lord Stark's arrest and execution, Queen Regent Cersei Lannister orders the City Watch of King's Landing to hunt down the late King Robert's bastards.[13] Not far from King's Landing, Yoren's party is stopped by several gold cloaks, who demand that Yoren give up Gendry. Yoren refuses, however, and with his recruits chases off the gold cloaks.[15] Lommy assumes that Gendry is Lord Stark's bastard.[11]

Later, at an abandoned town by the Gods Eye, the recruits are attacked by soldiers led by Ser Amory Lorch. Gendry wears his bull helm during the fighting. Praed's cheap sword breaks on a helm, so Gendry takes a new sword after after he, Arya, and Hot Pie kill a soldier. Yoren is slain, however, and Gendry is one of the few to escape.[16]

Gendry advises the survivors to avoid roads. Whilst on reconnaissance with Arya, Gendry confronts her about being a girl. He eventually has the truth out of her, that she is Lord Stark's daughter, and he is subsequently embarrassed by how crass he had spoken to her when she was in fact highborn.[6] The youths are captured in a village by the Mountain's men, soldiers led by Ser Gregor Clegane, and Raff the Sweetling kills Lommy.[6]

The soldiers spare Gendry's life, since a smith is useful, although his horned helm is worn first by Dunsen[17] and later Polliver.[7] The captives are taken to Harrenhal, where Gendry works in the forge[18] as a smith for Lucan.[7] He does not take part in the fall of Harrenhal to northmen.[19]

Gendry continues to smith at Harrenhal after the castle is occupied by Lord Roose Bolton. Arya persuades Gendry and Hot Pie to escape the castle with her, since Roose intends to grant Harrenhal to Vargo Hoat and the Brave Companions. Gendry wears oiled chainmail under a cloak and brings stolen swords and his blacksmith's hammer with him.[20]

Arya, Hot Pie, and Gendry travel through hills, woods, and fields in the direction of Riverrun.[8] They are apprehended by the brotherhood without banners at the Inn of the Kneeling Man, where Hot Pie decides to remain as a baker.[2] Greenbeard leads the group to the Lady of the Leaves, High Heart, and Acorn Hall. Gendry and Arya tussle in the forge of Acorn Hall.[12] Gendry is embarrassed at the Peach in Stoney Sept, and he declines to sleep with Bella. When an old man propositions Arya at the brothel, Gendry defends her and claims she is his sister.[10]

The brotherhood brings Gendry and Arya to the hollow hill, where they witness Lord Beric Dondarrion's duel with Sandor Clegane.[21] Beardless Dick and Mudge guard the youths during the battle at the burning septry. Impressed with the ideals of the brotherhood, Gendry offers to serve them as a blacksmith. He is knighted by Beric as Ser Gendry, knight of the hollow hill.[9] Gendry is distrustful of Beric's squire, Lord Edric Dayne.[22]

Arya, feeling abandoned by Gendry and Hot Pie and angry at the brotherhood's slowness in taking her to Riverrun, escapes from the outlaws.[22] Lady Stoneheart replaces Beric as the leader of the brotherhood.[23] While questing to find Sansa Stark, Brienne of Tarth encounters Gendry working as a smith at the inn at the crossroads, and she is shocked by his striking resemblance to Renly Baratheon. Gendry wants Brienne's party to leave, but Willow Heddle allows them to stay at the inn. Gendry has begun following the Lord of Light instead of the Faith of the Seven.[4]

While Gendry is making a sword at the inn's forge, Brienne questions the boy about his parentage. Their conversation is interrupted by the arrival of former Brave Companions, however. Brienne duels with Rorge and slays him, only to be savaged by Biter. Gendry saves Brienne's life by driving a spear through Biter's neck.[4][24] Brienne is taken captive by the brotherhood. Gendry accompanies them as far as a river, then returns to the inn to protect its orphaned children.[24]

Gendry remains ignorant of his heritage.[25] Joe Dempsie as Gendry in Game of Thrones

Gendry: I'm a 'prentice smith, and one day might be I'll make a master armorer ... if I don't run off and lose my feet or get myself killed.
Arya: The next helm you make, put mule's ears on it in place of bull's horns![19]

Arya: You're not my brother.


Gendry: That's right. I'm too bloody lowborn to be kin to m'lady high.
Arya: That's not the way I meant it.


Gendry: Yes it is. Go away. I want to drink this wine in peace. Then maybe I'll go find that black-haired girl and ring her bell for her.[10]
—Arya Stark and Gendry

Eddard: You know who the boy is. That is not a question.
Tobho: The boy is my apprentice. Who he was before he came to me, that's none of my concern.[5]

If the day ever comes when Gendry would rather wield a sword than forge one, send him to me. He has the look of a warrior.[5]

The Baratheon look was stamped on his face, in his jaw, his eyes, that black hair.[26]

When he worked, nothing existed for him but metal, bellows, fire. The hammer was like part of his arm.[19]

Gendry had his own secret, though even he didn't seem to know what it was.[8]

In his chainmail shirt with a sword in his hand, Gendry looked almost a man grown, and dangerous.[2]

Bella: Don't he like girls?
Arya: He's just stupid. He likes to polish helmets and beat on swords with hammers.[10]