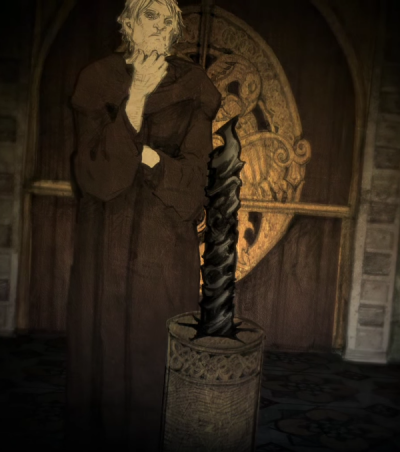 An acolyte attempts to light a glass candle. ©HBO

A glass candle is a candle made of obsidian. Historically they burned, but they have not been reported to burn in recent memory.

One green and three black candles were brought to the Citadel from Valyria a thousand years before the Doom of Valyria. They are tall and twisted with sharp edges.[1] These glass candles give off an unpleasantly bright light that does strange things to colors (white becomes as bright as fresh fallen snow, yellow shines like gold, reds turns to flame, and shadows become so black that they look like holes in the world).[2]

It is claimed that when the glass candles burn the sorcerers can see across mountains, seas and deserts, give men visions and dreams and communicate with one another half a world apart. [2]

The night before an acolyte of the Citadel says his vows, he must stand a vigil in a vault with nothing but the three black candles and no other light permitted. He must spend the night in darkness unless he can light the candle. According to the maesters, this ritual is to show that even with all the knowledge one has acquired, there are still some things that are impossible.[1]

It was reported that glass candles that had not burned in a hundred years were now burning in the house of Urrathon Night-Walker.[3]

One night in the apex of the Great Pyramid of Meereen Daenerys Targaryen is unable to sleep. She leaves her private chambers and heads for the terrace garden where she decides to take a bath alone in the terrace pool.

As she is bathing Daenerys hears a noise and sees Quaithe standing under a persimmon tree, clad in a hooded robe long enough to touch the grass at her feet. Daenerys wonders how an intruder could get past her guards. Quaithe replies that she "came another way", and that the guards never saw her.

Quaithe then delivers to Daenerys another cryptic warning that starts with "The glass candles are burning. . ." [4]

”It is said that the glass candles are burning in the house of Urrathon Night-Walker, that have not burned in a hundred years.”