Ser Godry Farring, called Godry the Giantslayer,[1] is a knight of House Farring and a supporter of Stannis Baratheon.[3] He is the cousin of Ser Gilbert Farring.[4]

Godry is boastful and condescending,[1][7][5] but fierce in his dedication to R'hllor.[8] His crony is Ser Clayton Suggs.[7]

Godry wears plate and mail.[5] His breastplate is silvered steel inlaid with niello,[6] as is the armor of his courser.[2] He fastens his cloak with the burning heart of R'hllor.[6]

Ser Godry earns the nickname Giantslayer from the battle beneath the Wall, during which he chases after a fleeing giant, puts a lance in his back, and then hacks off his small head.[1]

Godry is at Castle Black with Stannis Baratheon.[3] 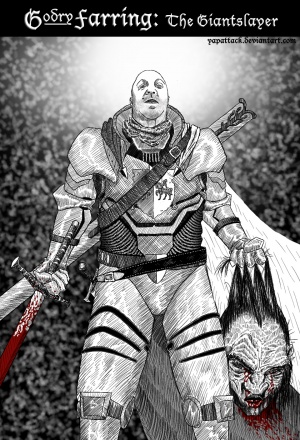 In the practice yard of Castle Black, Godry attempts to goad Jon Snow, the young Lord Commander of the Night's Watch, into a fight but the knight is ignored.[1] He is among the queen's men in the common room who witness Jon's confrontation with Janos Slynt, and he laughs when Janos refuses to obey the lord commander's orders.[9]

During the execution of "Mance Rayder", Godry rides the horse Mance is tied to, and drags him to the cage in which he is burned by Melisandre.[2] He ridicules Mors Crowfood and the Umbers during Stannis's war council.[7] Jon worries that Stannis will marry Val to Godry, Ser Richard Horpe, or Ser Justin Massey.[10]

Godry is among those who march with Stannis on Deepwood Motte. He leads the vanguard of Stannis's army during the march on Winterfell, but they are passed by swifter northmen wearing bear-paws.[5] Godry leads the prayers to R'hllor at the nightfires, and he urges Stannis to sacrifice an unbeliever to stop the blizzard slowing the march of the army.[5] He gets his wish when four Peasebury men are caught in the act of cannibalism and are subsequently staked and burned at the crofters' village.[8]

Godry has been urging Stannis to sacrifice Theon Greyjoy to R'hllor. Along with Ser Clayton Suggs and Ser Richard Horpe, Godry brings Maester Tybald in for questioning by the king. Stannis has Godry confine the maester to a hut.[6]

Godry: A man who bears Valyrian steel should use it for more than scratching his arse.


Jon: I use Longclaw when I must, ser.
Godry: How well, though? Show us. I promise not to hurt you, lad.
Jon: Some other time, ser. I fear that I have other duties just now.

I have slain a giant, boy. Why should I fear some flea-ridden northman who paints one on his shield?[7]

Lord of Light, preserve us from this evil. Show us your bright sun again, still these winds, and melt these snows, that we may reach your foes and smite them. The night is dark and cold and full of terrors, but yours is the power and glory and the light. R'hllor, fill us with your fire.[5]

Godry the Giantslayer. A big name for a small man. Farring was broad-chested and well muscled under his plate and mail. He was also arrogant and vain, it seemed to Asha, hungry for glory, deaf to caution, a glutton for praise, and contemptuous of smallfolk, wolves, and women.[5]