Griffin's Roost, or simply the Roost,[1] is the seat of House Connington in the stormlands. The castle is located between Storm's End and Crow's Nest in northwestern Cape Wrath.[2][3] It is ruled by Ser Ronnet Connington, the Knight of Griffin's Roost.[4] 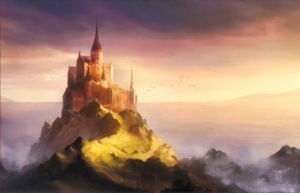 Small but strong, Griffin's Roost is located on a lofty crag jutting out from the shores of Cape Wrath. The castle lies surrounded by red stone cliffs on three sides, which descend into the stormy waters of Shipbreaker Bay. The land-facing approach is a long natural ridge called the griffin's throat. The entrance to the griffin's throat is guarded on one end by a gatehouse, and by the castle's main gate and two round towers on the other end.[3]

Besides faded tapestries, Griffin's Roost is also decorated with arched windows displaying myriad diamond-shaped panes of red and white glass. The bed in the lord's chambers sits below a canopy of red and white velvet. The great hall contains the carved and gilded Griffin Seat where fifty generations of Conningtons have ruled.[3]

The east tower, the tallest of the castle's, offers a view of the surrounding countryside. The castle also contains stables, armory, barracks, and a maester's tower with a rookery. A secret stair beneath the sept's altar of the Mother leads to a bolt-hole, while another stair under the northwest tower goes to a hidden cove beneath the crag which appears when the tide is out. A well-provisioned garrison can hold the castle against twenty times as many men.[3]

Lord Armond Connington enjoyed looking at the nearby forests and crags from atop the east tower of the castle. When Prince Rhaegar Targaryen and his escort visited Griffin's Roost for a fortnight while returning from Dorne, Armond's son, Jon Connington, showed his princely friend the view as well. During the welcoming feast, Rhaegar played a song on his harp which made women in the hall weep.[3]

During Robert's Rebellion, Lord Jon was raised to the position of Hand of the King to Aerys II Targaryen, Rhaegar's father. After his failure at the Battle of the Bells, Jon was stripped of his titles and sent into exile, where he is believed to have drank himself to death.[5] Griffin's Roost and the lordship that went with it passed to Jon's cousin and castellan, Ser Ronald Connington. When Aerys II was replaced on the Iron Throne by Robert I Baratheon, Ronald was demoted from lordship to be merely the Knight of Griffin's Roost. Nine-tenths of his lands were then distributed to neighboring lords who had supported Robert in his rebellion.[3]

The current Knight of Griffin's Roost is Ser Ronnet Connington, the son of Ser Ronald Connington. Red Ronnet supports Renly Baratheon during the War of the Five Kings,[6] but he joins Stannis Baratheon after Renly's death. Ronnet submits to King Joffrey I Baratheon after the Battle of the Blackwater.[7]

Ronnet joins the host of Ser Jaime Lannister to subdue the riverlands.[2]

While Red Ronnet is away, his exiled uncle, Jon Connington, leads the taking of Griffin's Roost by the Golden Company. Only four members of Ronnet's garrison survive the attack. Jon confines Ronnet's bastard son, Ronald Storm, and his siblings, Raymund and Alynne, to the west tower.[3]

Princess Arianne Martell stops at Griffin's Roost during her mission to meet with Jon and Aegon as an envoy of her father, Doran Martell.[1]

Your father's lands are beautiful.[3]