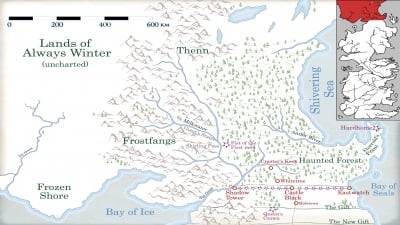 The major locations beyond the Wall (click to zoom) 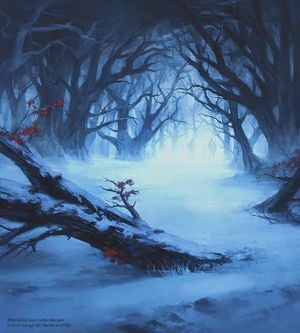 The wood is named the haunted forest by the brothers of the Night's Watch, who traditionally have cut all trees within half a mile of the Wall. As the number of black brothers has diminished over the centuries, however, the treeline has crept closer to the Wall, aside from the inhabited forts of Castle Black, the Shadow Tower, and Eastwatch-by-the-Sea.[2]

From atop the Wall, the haunted forest appears as a vast green expanse when not covered in snow.[3] Types of trees in the forest include ash,[4] broadleaf,[5] chestnut,[6] fir,[4] ironwood,[6] oak,[6] sentinel,[6] soldier pine,[7] and weirwood.[8] Wild white roses grow on some chestnuts.[6] The haunted forest is the only known location where one can find more than two or three weirwoods in a single place.[8] "Ranger's roads" are game trails and streambeds used by the rangers of the Watch to traverse the silent wood.[9] Few rangers have traveled further than fifty leagues into the haunted forest, however.[10]

Major rivers in the haunted forest include the Milkwater and the Antler River,[11], and the wood also contains streams, brooks, deep lakes, flint ridges, and hills.[6][4] Unlike in the Seven Kingdoms, there are no ferries or bridges across the lakes and rivers beyond the Wall.[12] The woods are thinner near the Shivering Sea], with more flatlands, rolling hills, and salt marshes than in the west.[13]

The haunted forest contains numerous free folk villages and settlements, such as Whitetree, [9] Craster's Keep,[6] and perhaps Ruddy Hall. The Fist of the First Men, a great hill isolated near the Milkwater in the western part of the forest,[11] contains an abandoned ringfort of the First Men.[5]

Blocks of ice from the haunted forest's lakes are said to have been used in the construction of the Wall centuries ago.[14]

King Theon Stark joined the Night's Watch for an expedition beyond the Wall which broke the power of the wildlings for a generation.[15]

Six hundred years ago, ashes from Hardhome rained down on the haunted forest and the Shivering Sea for near six months.[16]

In 50 AC, Lord Walton Stark was killed by giants while pursuing Ser Raymund Mallery's rebels in the forest.[17]

Queen Alysanne Targaryen was escorted into the haunted forest by Lord Commander Lothor Burley and a hundred rangers in 58 AC.[3] 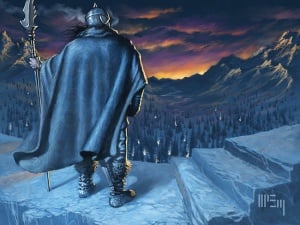 While ranging in the haunted forest, Ser Waymar Royce, Will, and Gared are attacked by Others, who had been believed extinct.[18]

Benjen Stark, the First Ranger, leads a ranging party into the forest, but he does not return as expected.[19][2]

Jon Snow and Samwell Tarly swear the vow of the Night's Watch in a weirwood grove just north of the Wall and Castle Black.[8] The corpses of Othor and Jafer Flowers, members of Ben's party, are found near the Wall. After being brought back to Castle Black, the bodies rise as wights and attack the Night's Watch.[20]

Jeor Mormont, Lord Commander of the Night's Watch, leads a great ranging northwest from Castle Black into the haunted forest in search of Mance Rayder's wildling host and the missing Benjen Stark. Samwell Tarly is frightened of the forest,[21] and even veteran brothers become more somber as they travel deeper into the wood.[9]

Each wildling village found by the ranging has been abandoned, and foragers find little game in the forest.[9] The Night's Watch stop at Craster's Keep, and Craster explains that the villages have been emptied because Mance has been gathering the wildlings in the Frostfangs.[6]

Lord Commander Mormont has the Watch encamp at the Fist of the First Men, and foresters cut down trees for firewood. Jarman Buckwell's sharpest-eyed men hide in trees as scouts. Near the base of the hill, Ghost leads Jon to a buried cache containing dragonglass knives, spearheads, arrowheads, and an old warhorn.[5] When Qhorin Halfhand's men from the Shadow Tower arrive at the Fist, Qhorin explains they had been delayed by Alfyn Crowkiller's band.[22] Jeor sends ranging parties led by Qhorin, Jarman, and Thoren Smallwood to scout in the nearby mountains.[22] 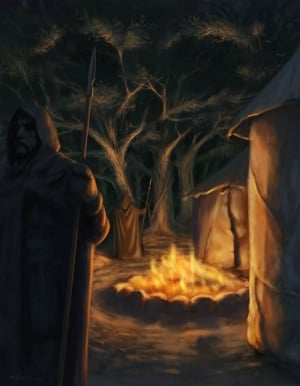 The Night's Watch encamped at the solitary hill amidst the snowy forest are suddenly attacked by wights and overwhelmed in the fight at the Fist.[23] The scattered survivors make their way back to Craster's Keep, but many die from wounds or attacks by Others and wights along the way.[24] After an Other kills Small Paul, Samwell Tarly kills the strange creature with a dragonglass dagger.[24] The brothers of the Night's Watch disperse further after the mutiny at Craster's Keep, with only a few making it back to Castle Black.[25]

Sam and the wildling Gilly flee from Craster's through the haunted forest. After being saved from wights by Coldhands,[12] they reach the Nightfort in safety.[26]

Meanwhile, Mance Rayder has gathered the free folk and moves his host along the Milkwater through the forest toward Castle Black.[23] Jon Snow, having joined the wildlings by claiming to be a deserter, is part of the raiding party of Jarl and Styr. Jon sleeps with Ygritte during the journey south to the Wall, including in a cave grotto,[27] and they climb the Wall[28] at Greyguard.[29] Mance's host besieges the Wall,[30] but they are defeated in the battle beneath the Wall when the army of Stannis Baratheon unexpectedly attacks from the east through the forest.[31]

Mance's wilding host collapses after being defeated by Stannis and the Night's Watch. Those who are not captured at Castle Black flee throughout the regions beyond the Wall,[32][33] but many free folk succumb to hunger, the cold, sickness, and wights.[32] Queen's men imprison "Mance", actually Rattleshirt,[34] in a cage at Castle Black made from the forest's trees.[33]

Jon Snow, now Lord Commander, sometimes watches the forest from atop the Wall.[35] He sends three groups of rangers led by Ser Alliser Thorne, Black Jack Bulwer, and Kedge Whiteye to scout north of the Wall;[36] Black Jack's group is killed by the Weeper,[34] while nothing is known of the other two groups.

Jon leads recruits to swear their vows at the same godswood where he swore his. Two of them, Jax and Leathers, are wildlings who grew up in the forest. They find a small group of peaceful wildlings and the giant Wun Weg Wun Dar Wun.[37] Val volunteers to search the forest for Tormund,[16] and she eventually brings Tormund and his followers back to Castle Black.[38][39] Tormund is to lead the Night's Watch in a ranging to rescue Cotter Pyke and the wildlings at Hardhome. Before they depart, however, Jon is attacked in the mutiny at Castle Black.[13]

Bran Stark travels with his companions toward the cave of the three-eyed crow, and he observes the stillness of the snowy forest. While Bran shelters in the longhall of an abandoned village, Coldhands kills the mutineers from Craster's Keep.[40] The party eventually arrives at the hillside cave, a cleft between weirwoods. Wights attack them as they climb, but they are saved by Leaf.[41] While Bran learns from the three-eyed crow, Jojen Reed sometimes spends hours looking out over the forest from the cave's mouth.[42] Summer finds no living game during his hunts.[42] As a skinchanger, Bran enters a raven and flies over the hill.[42] 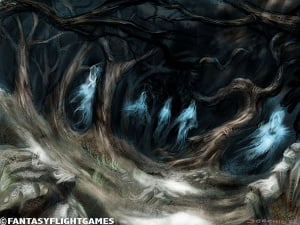 The first time he had been sent beyond, all the old stories had come rushing back, and his bowels had turned to water. He had laughed about it afterward. He was a veteran of a hundred rangings by now, and the endless dark wilderness that the southron called the haunted forest had no more terrors for him.[18]

Few axes had ever swung in that black wood, where even the moonlight could not penetrate the ancient tangle of root and thorn and grasping limb. Out there the trees grew huge, and the rangers said they seemed to brood and knew not men. It was small wonder the Night's Watch named it the haunted forest.[2]

Good men have gone into those woods before, and never come out.[43]

—Yoren to a black brother

They had ridden past the end of the world; somehow that changed everything. Every shadow seemed darker, every sound more ominous.[8]

Beyond the Wall the haunted forest stands as it stood in the Dawn Age, long before the Andals brought the Seven across the narrow sea.[8]

No one would admit to being afraid—they were men of the Night's Watch, after all—but Jon could feel the unease. Four empty villages, no wildlings anywhere, even the game seemingly fled. The haunted forest had never seemed more haunted.[9]

This is the haunted forest. Maybe there are ghosts here, the spirits of the First Men. This was their place, once.[5]

A thousand leaves fluttered, and for a moment the forest seemed a deep green sea, storm-tossed and heaving, eternal and unknowable.[5]

Jon: My lady, you do not have to do this. The risk—
Val: —is mine, Lord Snow. And I am no southron lady but a woman of the free folk. I know the forest better than all your black-cloaked rangers. It holds no ghosts for me.[16]

Chapters that takes place in the haunted forest