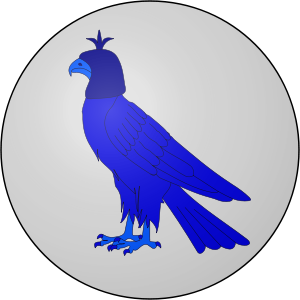 A hooded hawk is included in the sigil of House Fowler

Hawks are birds of prey similar to real-life hawks.

Known for their speed[1] and eyesight,[2] captive hawks and falcons can be used for hunting, a popular activity for noblemen[3][4] and noblewomen.[5][6][7] Willas Tyrell is said to have the finest hawks in the Seven Kingdoms,[8] and House Celtigar is believed have magnificent hawks at Claw Isle.[9] Merchants can sell hawks at markets.[10]

Maesters use ravens to send messages as they are better able than doves or pigeons to defend themselves from hawk attacks,[11] but many ravens are still brought down by the birds of prey.[12][1]

Sphinxes are said to have the wings of a hawk.[14]

Skinchangers who have entered the minds of hawks can lose their connection to the earth and instead only want to fly.[15]

Cragorn has a great hawk tattooed on his chest.[16]

There are reports that Aegon Targaryen and his sister Visenya hawked at the Arbor with Lord Redwyne prior to Aegon's Conquest.[17] After he became king, many lords of the Seven Kingdoms tried to impress Aegon I with feasting, balls, hunting, and hawking during his royal progresses.[18]

Saera Targaryen was able to persuade her father, King Jaehaerys I Targaryen, to give her a variety of animals, including a hawk. The princess often hunted and hawked with her friends, Perianne Moore and Alys Turnberry.[19]

Prior to the Maiden's Day Cattle Show, Lucinda Penrose was attacked by outlaws while hawking along Blackwater Bay, and her bird was killed.[21]

"The Hawk" was the name for one of three rebels during the reign of King Aegon V Targaryen.[22]

Focusing his attention on the sky, Lord Luthor Tyrell rode off a cliff to his death while hawking.[23]

Young Stannis Baratheon cared for a goshawk he named Proudwing, but the bird was never the equal of Thunderclap, the gyrfalcon of his elder brother, Robert.[1] After becoming king, Robert I prefers to hunt and hawk and leave the tedium of governing to Lord Jon Arryn, his Hand of the King.[24] Robert spent much of his time hawking during a visit to Greenstone.[25]

Daenerys Targaryen watches a hawk circling above the Dothraki sea in search of prey.[26]

Patrek Mallister and Theon Greyjoy share a fondness for hawking.[3]

Renly Baratheon keeps a pair of red-tailed hunting hawks in his pavilion at Bitterbridge.[28]

Sansa Stark goes hawking in the kingswood with Margaery Tyrell.[29]

Arianne Martell spies a hawk when her party approaches the Greenblood.[30]

While bringing the Mountain's skull to Sunspear, Ser Balon Swann is delayed by House Wyl with eight days of hunting and hawking.[13]

Some of the Brazen Beasts wear hawk masks in Meereen.[31]

Outside, Dunk glimpsed a hawk soaring in wide circles through the bright blue sky. He envied him.[32]