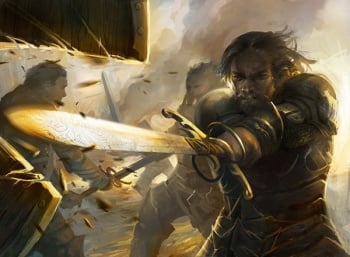 Heartsbane is the two-handed greatsword of House Tarly. The ancestral blade is made of Valyrian steel.[1]

For the last five centuries, the sword has been an heirloom of House Tarly passed down from one Lord of Horn Hill to the next.[1][2]

Savage Sam Tarly cut down dozens of Dornishmen with Heartsbane during the Vulture Hunt.[3]

Lord Randyll Tarly let his son and heir, Samwell Tarly, hold Heartsbane a few times, but the boy was afraid he would hurt his sisters.[4] Randyll eventually disowned his pacific son, forcing Sam to take the black.[1] While serving beyond the Wall with the Night's Watch, Samwell Tarly dreams of a feast at Horn Hill during which he cuts a roast with Heartsbane.[6]

Victarion Greyjoy anticipates claiming Heartsbane from Randyll when the Reach retaliates for the taking of the Shields by the ironborn.[8]

Heartsbane must go to a man strong enough to wield her, and you are not worthy to touch her hilt.[1]

I was heir to my father's blade once. Heartsbane. Lord Randyll let me hold it a few times, but it always scared me. It was Valyrian steel, beautiful but so sharp I was afraid I'd hurt one of my sisters. Dickon will have it now.[4]

Dunstan: Lord Tarly bears the greatsword Heartsbane, forged of Valyrian steel, and he is always in Lord Tyrell's van.
Victarion: Let him come. I will take his sword for mine own, as your own forebear took Red Rain.[8]