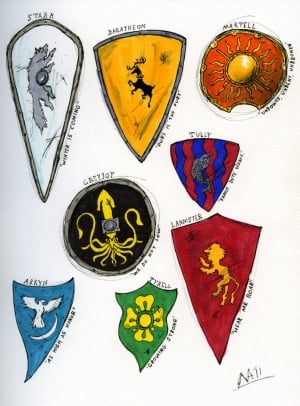 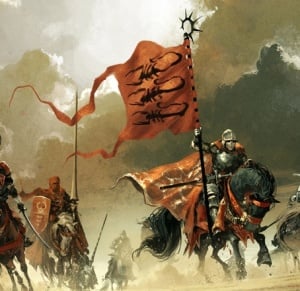 A knight easily identifiable by his heraldry as belonging to House Qorgyle - by Tomasz Jedruszek. © FFG 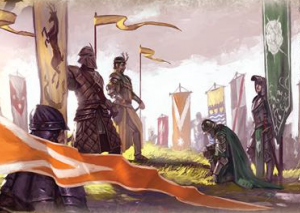 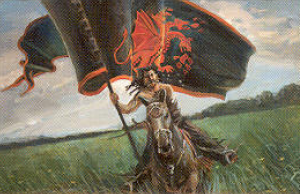 Heraldry is the art and science of blazoning coats of arms. Heraldry is used by the royalty and nobility as a sign of status, and as such is an important part of the Seven Kingdoms feudal society. Most noble houses have their own designs, and variants of these designs are adopted only by members of the house. Coats of arms are commonly used by knights in tourneys and on the battlefields as a way to identify allied from enemy soldiers in the heat of battle. Conversely, mystery knights that want anonymity use blank or unknown coats of arms.

Heraldry in Westeros and in the real world

Heraldry in the Seven Kingdoms serves largely the same purpose as in medieval Europe, but Westerosi heraldry is significantly less formalized.[1] In this regard, Westeros resembles early medieval or Dark Age societies, before the rules of heraldry were properly developed and widely accepted. While real-world heraldry makes extensive use of words and jargon specific to blazonry, Westerosi arms are mostly described in standard English. Most of the Seven Kingdoms use escutcheon-shaped coats of arms, but Dornish houses favor circular coats of arms that are not widely seen anywhere else.[2]

The arms of a house belong to that family, as in Germany and Italy, and may be used by all trueborn descendants of that house.[3][4] Bastards may sometimes use the arms of their father's house with an added distinction.

Traditional real-world heraldry limits the number of tinctures to two metals (argent for white and or for gold), five colours (gules for red, sable for black, azure for blue, vert for green, and purpure for purple), and two furs (ermine and vair), and limits how these tinctures can be placed together. Westeros instead uses a much larger palette, makes no distinction between metals and colours, and describes tinctures using simple English words instead of heraldic vocabulary. Real-world heraldry follows the rule of tincture, which dictates that "metals" may not be placed over other metals, and "colours" may not be placed over other colours. While this rule is sometimes broken in real-world heraldry, it is altogether absent in Westeros and many houses have arms that would violate the rule of tincture:

In traditional heraldry no distinction is made between white, silver and light grey, which are all named "argent". Likewise, both gold and yellow are called "or". In Westeros, white, grey, and silver are treated as distinct tinctures and can be used together on a coat of arms:

Many of the available blazons of Westerosi coats of arms are notable in their lack of detail; for instance the blazon for the coat of arms of House Blanetree (maple leaves, green and brown, strewn on a field of yellow) fails to tell us how many maple leafs the shield should have, and gives only the vaguest indication of how they should be placed. In some cases the blazons manifest in quite poor designs rendering them of little use for recognition on the battlefield, for example:

For practical reasons, traditional heraldry uses a very limited set of tinctures; it was not always practical or possible to reproduce subtler color variations in the numbers and time constraints found. Besides, coats of arms are meant to be recognizable from far away and are often employed in shields and other pieces of equipment that are subject to abuse, neglect and disrepair. Even today, many pigments show some degree of color degradation, often severe, when consistently exposed to sun rays, rain and other influences. This limited palette is not the case in the Seven Kingdoms, where heraldic descriptions include ambiguous or subtle colors such as:

The use of physical material descriptions like 'oak', 'masonry' or 'sand' in Martin's heraldic descriptions also complicates matters because it is uncertain whether these refer to a specific shade or to an attempt to actually represent these materials pictorially, such as painting the grain of the oak or the bricks of the masonry. Such detail would seem difficult to render on fabric surfaces such as flags, surcoats or the livery of men-at-arms or servants. This however reflect the real world use of the tincture "proper".

Charges are objects or figures placed on a shield. Many of the devices and charges used in the heraldry of Westeros derive directly from traditional sources and include creatures such as lions, stags and birds, and symbols such as stars, weapons and ships. There are some notable differences in Martin's designs though:

The use of seven-pointed stars to represent the Faith of the Seven. Seven-pointed stars are rare in traditional heraldry and vexillology, with a notable exception being the flag of Australia. Examples include:

The use of very detailed pictures, particularly humanoid figures, such as:

In reality, these figures would be difficult to render on shields and flags with any accuracy or consistency.

The use of detailed creatures and figures on the shield that would normally only appear as supporters in traditional coats of arms, such as:

The use of fauna and flora specific to Westeros, such as:

Some charges with simple geometric shapes are so common that they are often classified separately as ordinaries. These include:

Variations of the field

The field of a shield, is sometimes made up of a pattern of colors, or variation. A pattern of horizontal (barwise) stripes, for example, is called barry, while a pattern of vertical (palewise) stripes is called paly. A pattern of diagonal stripes may be called bendy or bendy sinister, depending on the direction of the stripes. Other variations include chevrony, gyronny and chequy. For further variations, these are sometimes combined to produce patterns of barry-bendy, paly-bendy, lozengy and fusilly. Semés, or patterns of repeated charges, are also considered variations of the field.[5][6]

Divisions of the field

The field of a shield in heraldry can be divided into more than one tincture, as can the various heraldic charges. Many coats of arms consist simply of a division of the field into two contrasting tinctures. These divisions are considered to lie next to each other rather than on top of each other and thus the rule of tincture can be ignored. For example, a shield divided azure and gules would be perfectly acceptable. A line of partition may be straight or it may be varied. The variations of partition lines can be wavy, indented, embattled, engrailed, nebuly, or made into myriad other forms.[7][8]

In general, if the field is divided and every segment has to be blazoned (e.g. each has a different charge on it), they are blazoned in the following order: dexter to sinister, then chief to base. In the case of "party per cross" or "quarterly", the four segments are typically numbered in this order.

To marshal two or more coats of arms is to combine them in one shield, to express inheritance, claims to property, or the occupation of an office. This can be done in a number of ways, of which the simplest is impalement: dividing the field per pale and putting one whole coat in each half. Impalement replaced the earlier dimidiation – combining the dexter half of one coat with the sinister half of another – because dimidiation can create ambiguity between, for example, a bend and chevron. "Dexter" (from Latin dextra, right) means to the right from the viewpoint of the bearer of the arms and "sinister" (from Latin sinistra, left) means to the left. The dexter side is considered the side of greatest honour.

A more versatile method is quartering, division of the field by both vertical and horizontal lines. This practice originated in Spain after the 13th century.[9] As the name implies, the usual number of divisions is four, but the principle has been extended to very large numbers of "quarters"; the largest number recorded being the arms of the Duke of Buckingham and Chandos, featuring a total of 719 "quarters".

Quarters are numbered from the dexter chief (the corner nearest to the right shoulder of a man standing behind the shield), proceeding across the top row, and then across the next row and so on. When three coats are quartered, the first is repeated as the fourth; when only two coats are quartered, the second is also repeated as the third. The quarters of a personal coat of arms correspond to the ancestors from whom the bearer has inherited arms, normally in the same sequence as if the pedigree were laid out with the father's father's ... father (to as many generations as necessary) on the extreme left and the mother's mother's ... mother on the extreme right. A few lineages have accumulated hundreds of quarters, though such a number is usually displayed only in documentary contexts.[10]

The third common mode of marshalling is with an inescutcheon, a small shield placed in front of the main shield. In Britain this is most often an "escutcheon of pretence" indicating, in the arms of a married couple, that the wife is an heraldic heiress (that is, she inherits a coat of arms because she has no brothers). In continental Europe an inescutcheon (sometimes called a "heart shield") usually carries the ancestral arms of a monarch or noble whose domains are represented by the quarters of the main shield.[12]

In Westeros arms belong to a family, and any trueborn child may use the family arms. This is similar to the practice in German heraldry, and converse to the practice in British heraldry, where only the head of the family may use the family arms; other members of the family have to difference their arms in some way. In Westeros this is not compulsory, though many choose to adopt their own personal arms, usually a minor variation on the arms of their house. For example:

Bastards do not have the right to use the arms of their families. Thus, a typical Westeros custom is that a bastard using a sigil (when knighted, for example) adds a distinction. This can be in the form of a color inversion of their family's coat of arms, or possibly with the addition of a red bend sinister.

Martin makes use of canting arms to represent some of the houses in his books. Canting arms are a type of heraldic pun, whereby the blazon of the shield makes a direct reference to the name of the family. Examples include:

In other houses the canting refers not to their name of the family, but to their ancestral seat. Examples include:

Some of the Houses and their blazons are Martin's tributes to other authors, or other real-world things. For example:

In real world heraldry, there are family mottos that are often shown on a scroll under the shield in a coat of arms (except in Scottish heraldry where they are placed above the shield). In Westeros, these are called house words, and not displayed on the coat of arms.

You Westerosi are all the same. You sew some beast upon a scrap of silk, and suddenly you are all lions or dragons or eagles.[17]